Kuli Kohli’s poetry collection ‘A Wonder Woman’, published by Offa’s Press is full of down to earth, erudite observations on life, nature and humanity. Review by Neil Leadbeater 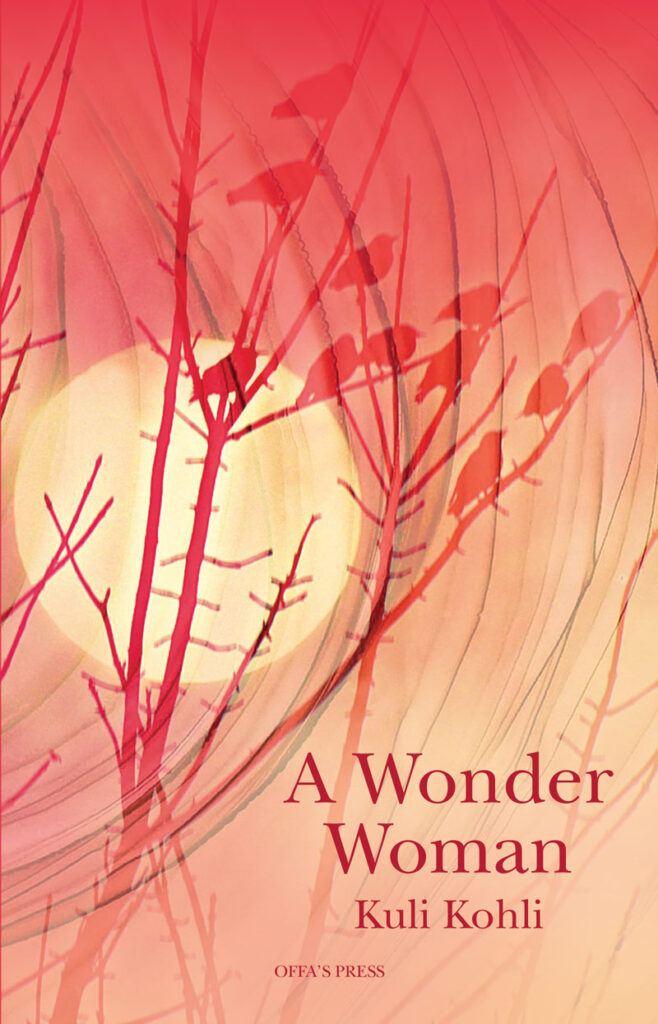 A Wonder Woman by Kuli Kohli

This collection could so easily have been titled “Wonder Woman” but there is the important addition of the indefinite article. Wonderful though her story is, Kuli Kohli, open-hearted and generous by nature, knows that she is not the only person to be blessed in life. Look inside and you will see that she dedicates this book “to all the wonder women”. The dedication is followed by an exclamation mark that not only says something about her zest for life but also suggests that this expression is not to be taken too seriously. Like the domestic goddess, Kuli does not put herself on a pedestal. We can all aspire to something greater than we are, but in reality we are just individuals humbly getting on with the business of our lives.

Kuli Kohli moved at an early age from Uttar Pradesh in India to England. She now lives and works in Wolverhampton, where she helps to run the Blakenhall Writing Group and the Punjabi Women’s Writing Group. A Wonder Woman is her first full-length collection of poetry.

Kohli draws her inspiration from the natural world, family and friends, colonial history, popular song and the domesticity of everyday living.

The range of her subject matter is impressive: on a personal level she writes powerfully about disability and her determination to survive and thrive. On a local level her poems convey to us the beauty and fragility of the changing landscape in the urban and rural areas of the West Midlands. In the wider scheme of things she writes about life under lockdown, prejudice, the Paralympics and religious festivals. There are poems about her family, her father’s love of gardening, a response to a miniature painting from Lucknow, snapshots of suburbia in Goldthorn Park, the simple pleasure of making a garam chai (a cup of hot, spicy tea) and a study of a couple having lunch in the rain.

There are a couple of visual poems in the collection: ‘A Woman Like Me’ and ‘Partition Of A Homeland’ These two very different poems make their power felt on the page. The former, a curvaceous text that is cinched at the waist, reads like a mock manifesto for a domestic goddess. It makes its point with the minimum of fuss sending the reader back to the myth of the wonder woman. The latter relates to the time when the British government divided India into two countries and three parts creating mass movement and instability leading to the displacement and death of millions of people. The displacement is expressed visually by means of a gap which starts in the title and then divides every line of the poem as it runs down the page. The text in itself makes for some powerful reading. For me, this is most important poem in the book even though it is not central to its overall theme.

On a different note, Kohli writes affectionately about her memories of her father who worked as a bus driver in the West Midlands. The poem, which is titled ‘On the Buses’, cleverly exploits the language of Punjabi Black Country dialect and the literary device of onomatopoeia. Here, Kohli makes use of the dialect to phonetically imitate the sounds of place-names that form a part of the bus route. For example, Bhra-di-hal (brother’s plough / tractor) is used for Brierley Hill; Daal-lasan (lentils, garlic) is used for Darlaston and Bhen-de-fude (Punjabi swear word) for Pendeford.

The humour in the third stanza catches that of the London Weekend Television sitcom ‘On the Buses’ starring Reg Varney as bus driver Stan Butler which ran from 1969 until 1973.

I saw the sparkle in his eyes as blonde and brunette women
in tiny dresses and high heels giggled, “How am ya luv?”
Replying in his Indian accent, “I am very fine, lav.”
“Am ya gooin dawan the buzz station?” Chattering,
“Got eny pennies, mi duck? I ey gor enof!” Winking, he would
let them on free. I had never seen Dad behave so funny.

Two minutes down the road, a giant Aldi stands
at the Fighting Cocks junction. A shoppers’ paradise,
with tantalizing smells, where Europe meets the globe.

The poem conjures up not only the ‘eastern flavours in the Blakenhall Shopping Precinct’, but also the local shops, a pub and a Sikh place of worship. Indian street food and sandalwood incense imbue it with an exotic, cosmopolitan atmosphere.

By contrast, Kohli’s poems on the natural world make for an equally satisfying read. These are often centred around specific places close to home such as the Wrekin and Cannock Chase.

A sequence of poems on trees offer up four very different pieces on the conifer, the mango, the oak and the Chile pine, also known as the monkey puzzle. Observant and inventive, Kohli describes the branches of the monkey puzzle as being ‘like industrial chimney brushes, / with stems like giant cactuses.’ In ‘Awakening’ Kohli urges us never to forget the magic of nature and all the bounty that is offered to us by Mother Earth.

Often in these poems, Kohli is a good exponent of the strong last line. Poems such as ‘Take This,’ ‘Innocent Snow,’ ‘I Wonder’ and ‘Equilibrium’ all have good last lines. Some of her poems are very inventive. ‘Natural Promise’ is written in the guise of a letter to herself from her hair. Here are the opening and closing stanzas:

Wash me, dry me, perm me,
curl me, cut me, steam me,
straighten me, colour me,
and treat me rough.
…

I shall give you beauty and keep your
head protected until I can grow no more.
I promise. Sincerely yours,
Hair xx

These powerful poems are full of surprises that express an unabashed appreciation for the world we live in, a generous helping of home-grown wisdom and a love for all of humanity.

Thank you, Neil, for this wonderful review of my poetry collection. 🙂