On 10 March, Mind the Gap and West Yorkshire Playhouse hosted a ‘TED-talk style symposium’ Let’s Talk Access in the Arts which brought together industry experts sharing best practice on how to make the arts and theatre more accessible for learning-disabled artists. Kate Lovell took part and reflects on the issues raised. With the launch of Hijinx’s new agency for professional learning disabled actors, Mind the Gap’s tour of Contained and Access All Areas supporting Cian Binchy’s second national tour of The Misfit Analysis, the world of learning disability and the arts is in an exciting place. At West Yorkshire Playhouse, a number of learning disabled artists and those championing their work came together to share their work, spark debate and work out where the barriers remain.

Charlene Salter shared her experience of training at Access All Areas’ pioneering course at Royal Central School of Speech and Drama, the Performance Making Diploma for Actors with Learning Disabilities, which has led into her professional career, with a solo show and appearances in Doctors and Casualty to her name.

A crucial aspect of Access All Areas is the journey that they support artists to take. They recognise that to do a diploma, even at a place with a reputation as revered as Central, only to be spat out into the big, wide, bewildering world of trying to forge a living in the arts is not true access to the professional world. With students who want to develop further work once completing the diploma, Access All Areas will support them to make professional work. Cian Binchy’s solo show The Misfit Analysis sprung from his Exit Showcase on the Central diploma.

In addition, the company recognise that professional acting jobs, for anyone, are not always forthcoming, and it’s crucial for most people to have additional skills to allow them to make a living between jobs. Access All Areas have a training course where they support learning-disabled people to train to be workshop facilitators, providing an additional money-making skill. This pragmatic and thorough training ground is an impressive launch pad for learning-disabled artists to fulfil their potential. Hearing from Mind the Gap and Liam Bairstow about how he came to be cast as a regular character in Coronation Street revealed another innovation in television casting which provides real, well-thought out access to professional roles. ITV set up a Breaking Through Talent audition workshop and invited learning-disabled actors, supporting them with how to audition for the screen.

Mind the Gap had the opportunity to support two actors to attend. The audition was not for a given role, but later, ITV contacted Mind the Gap and explained that they had written a part specifically for Liam Bairstow. They invited him back to the studios, asked him questions about his life, and then wrote the part of Alex based on aspects of his true-life experiences.

This is an excellent approach to casting a learning-disabled actor in a TV show. It demonstrates a commitment to create opportunities, and to invest time in making it as supportive and nurturing an environment as possible. It seems sensible for any audition to spend time with an actor and to remove the nerve-wracking, hurried performance of a learned script for casting directors, but is even more crucial for actors who face additional barriers.

By removing the pressure of sight reading or learning lines for a particular part, the actors attending the Breaking Through Talent audition could be relaxed and able to give the best of themselves and their talents.

West Yorkshire Playhouse are also taking a similar approach and holding general auditions for disabled actors as part of their commitment to the Ramps on the Moon project. They are allocating half an hour to spend with each actor, giving space to get to know someone, and for the actor, removing the pressure of an in-out audition reading. It was heartening to hear artistic director James Brining declare the Playhouse’s commitment to no longer cast non-disabled actors in disabled roles.

He spoke with honesty about how, had this been in place a few years ago, it would have made a significant difference to their approach in casting some of their recent productions, such as Of Mice and Men and The Glass Menagerie. Let’s hope with major producing houses now making this commitment, venues that are not officially linked to Ramps on the Moon will take note and follow suit. It was generally acknowledged that while we’re slowly but steadfastly moving away from cripping up on screen and stage, there’s still a distance to cover before disabled actors are being cast in roles which could be played by anyone and are not specified as a disabled character. But companies like Mind the Gap are combatting this issue to some extent, by supporting learning-disabled artists to produce their own work.

Mind the Gap support their artists to meet independent producers giving their artists a wider scope for opportunities outside of the organisation. Artists Alan and Daniel spoke about their upcoming work, and how invaluable having a producer on board has been in allowing them to develop their ideas into funded research and development projects.

Both explained how entirely inaccessible the Grants for the Arts application process is for learning-disabled artists, and stated that they would have had no chance of being successful if it had not been for the support of a producer. Daniel cited the knowledge of industry-specific jargon to be a big barrier for him. Alan would find it more accessible if he could submit a video of himself talking about his work. Food for thought for the Arts Council, who were present at the symposium.

There is opportunity for the conversation to continue, with another symposium on Autism in the Performing Arts taking place at the Lyric Hammersmith, prior to a performance of The Misfit Analysis. It’s encouraging that major producing houses are programming work by learning-disabled artists and providing space for symposium discussions linked to the shows. It brings the work and the conversations surrounding them into environments where there is the opportunity to usefully continue to disrupt and shift the status quo. 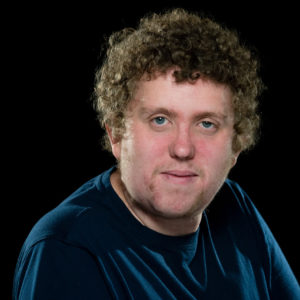 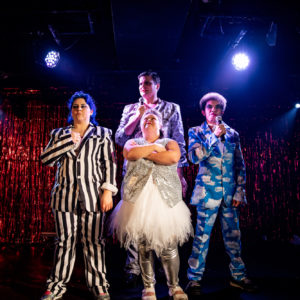