Kazimr Bielecki and Lennie Varvarides, founders of DYSPLA, an art’s collective supporting dyslexic/ND artists, talk openly about how their views have formed, developed and changed in their latest video, ‘Neurodivergent Aesthetic’ shown as part of the recent Living Record Film Festival 2021. Review by Emma Robdale. 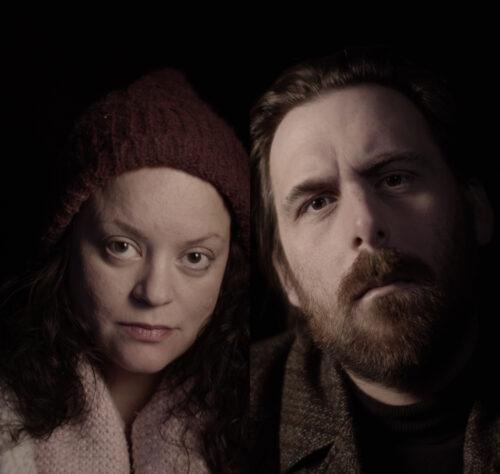 Lennie Varvarides and Kazimr Bielecki discuss their revelations on the neurodivergent aesthetic in their hour-long film. Lennie passionately advocates the potentials of “amazing” visual and verbal storytellers who might not have found education a straight-forward process. For readers/watchers unfamiliar with the concept ‘Neurodivergent Aesthetic’, a short summary introduces the film…

Neurodivergent: “Sometimes abbreviated as ND, means having a style of neurocognitive functioning that diverges significantly from the dominant societal standards of ‘normal’. Neurodivergent people include: dyslexics, dyspraxics, ADHD, autistics (including those with Aspergers), dyscalculics, OCD, dysgraphics, tourettes, etc.” (Hewlett, Cooper, 2017)

Lennie and Kazmir both believe that the ND aesthetic involves a person being in tune with their ‘inner’ feelings/self and being able to outwardly express this within the medium of art/film. They suggest that ND people have more “instinctual” freedom, existing outside of societal notions of right/wrong… and that this can make for intriguing perspective and filmography.

Speaking on how they have come to see ND aesthetics as a transcendental and holistic medium, they then expand upon how numerous ND peoples face negative treatment/stigma from young ages, and how this can stifle creativity/confidence. When Lennie started researching dyslexia, nine years ago, she “was the only person looking at dyslexia from a positive angle” and in her experience, it has only been very recently that society has begun seeing dyslexia as ‘trendy’ or ‘exciting’.

Further from this, she recognizes how, when differing learning styles/perspectives are not accepted, ND individuals will struggle to thrive and grow… “While people are hiding, they are not progressing, they are not developing their portfolio, or networking.”

She remarked that, “first I wanted to find my people”, reflecting on how DYSPLA has worked alongside “hundreds of ND creatives, writers, flimakers, poets and artists”, and that it was through working with them, observing their creative process/styles, that Kasimir and Lennie noticed aesthetic trends.

There are still a number of people who do not believe in dyslexia, Lennie stated, “It’s still considered a term used by middle-class parents… who are avoiding the word ‘stupid’.” That dylexia as a concept/diagnosis is still questioned makes DYSPLA’s work even harder; first they need to persuade people dyslexia exists, then that it has positive connotations, and only after that denote that it has a creative aesthetic.

Lennie commented on how ND/dyslexic people’s talents need to be nourished and supported: “How can someone grow up to think they can make something of themselves if they constantly believe they’re damaged?”

In the video Kazimir admits that when younger he wanted to avoid stigmatisation, so did not seek an ND diagnosis himself. Lennie discusses her own experiances with ND (dyslexia and ADHD) diagnosis. There was a time when it impacted on her confidence, but now she considers ND people as “natural born daydreamers”, deducing that this works to their favour when story-making. Believing neurotypical children often grow out and away from their natural creativity, she feels that ND people can keep hold of this and access it throughout their lives. For her, the ND aesthetic is fuelled by sensory and imaginary impetus. They both stressed that a disproportionate/large number of ND directors/creatives work at the top of the film industry.

In DYSPLA’s film, ‘Neurodivergent Aesthetic’, a range of theories and issues are spoken about intensely, and, at points, heatedly. Even within the core of DYSPLA there was some discrepancy upon views towards the ND aesthetic; for me, this demonstrates just how nuanced and intricate it is as a concept; exciting, but still encompassing a number of contradictions and controversies.

For more information about DYSPLA go to their website.

For more information about the Living Record Film Festival go to their website.

I am following this debate about the Autistic Aesthetic. It will be interesting to see how this progresses over the next few years.