Mandy Redvers-Rowe writes about her career, lockdown and her aspirations in a question and answer, interspersed with several short films commissioned by Northern Broadsides for their Digital Squad project. 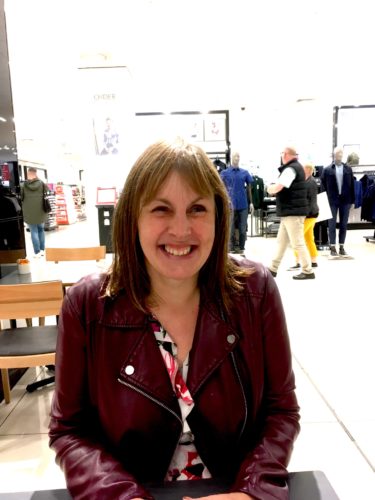 Could you tell us a little bit about you, your background, and your history as an artist?

I was born in London and moved to the South Coast where I was brought up near Bognor Regis. Later I went to university in Liverpool and loved it so much that I married a Scouser and stayed!

Our home is in New Brighton, a seaside town located at the mouth of the Mersey Estuary. We have a coastline that looks out over the spectacular Liverpool skyline, before it curves round to face the open Irish Sea.

I was registered blind at the age of sixteen. I went from being an ordinary teenager to having to go to a special school, learning to do everything differently. I felt like a lesser being, not as good as other people. I fought against this, determined to pursue my own path regardless. I went to university and studied drama. Then, in my early twenties I met a group of loud, angry disabled people who introduced me to the social model of disability. I felt more positive about myself, more empowered. For the first time in my life I had a strong identity, I was disabled and proud! This is really when I shifted from being a drama practitioner to being an artist.

I’m primarily a writer, although I do perform my own work sometimes. I’ve written for stage, television and radio. I first had success as a founder member of No Excuses, a disabled comedy trio, who in the 90s wrote and performed sketches, appearing regularly on ‘From theEdge’, a weekly magazine programme produced by the Disability Programmes Unit for BBC2.

Last year my show ‘Measuring Up’ was developed in partnership with the New Works Department at the Liverpool Everyman & Playhouse Theatresand funded by the Arts Council. We were due to tour it in the Autumn, but now plan to go ahead in 2021. I also had my first radio play, ‘Blind School’, broadcast on BBC Radio 4 (co-written with Sarah McDonald-Hughes).

Earlier this year My TV drama ‘Second Sight’, for Jimmy McGovern’s Moving On 11, was broadcast on BBC1.

You describe the poems that form the basis of your videos for Northern Broadsides as ‘word-pictures’. Could you explain what that means, and what you wanted to achieve?

I’m a little afraid of poetry. I love it, but don’t understand it. I have no idea of the rules and structures, so would never presume to describe my work as poetry. My starting point for Snapshots was to create pictures with words.

Although I can’t see, I have a strong visual sense. My creative starting point is often an image or picture. This can be an imagined one, or a real one that has been described to me. So when we went into lockdown and our everyday landscapes changed so dramatically, my instinct was to somehow try to capture these images, take photographs, snapshots. Pictures tell stories, evoke memories, allow us to re-live specific moments in time. But of course, words can do this as well.

I had written one word-picture for a previous project several years ago. My focus at the time had been to explore the idea of beauty. Many people, even visually impaired people, often respond to the question ‘What is beautiful?’ by describing something visual. People rarely describe a tactile surface, a sound, a smell, or an emotion as beautiful. I wanted to create a word-picture that evoked a beautiful scene without using any visual descriptors. So when thinking about these pictures, images unique to the COVID-19 crisis, I also thought it would be an opportunity to continue to explore this theme of non-visual beauty.

What has it been like writing during the lockdown? Has the crisis affected your creative process?

At first, I was definitely overwhelmed by the enormity of the events. Like many other people, I found myself obsessed by the news. Many of my own projects were postponed and for a while I wasn’t sure what to do.

I was aware of how lucky I was; no one close to me had COVID-19, and I hadn’t had to grieve. My heart went out to those who were suffering, who’d lost loved ones. We were all experiencing the same lockdown, but for each of us the crisis was unique, affecting us in different ways. My husband is vulnerable, so my biggest fear was getting COVID-19 and passing it on to him.

A few weeks in, when we were doing all we could do to stay safe, I tried to relax, allow experiences to have an impact, give myself room to think. It was at this time that I began to see potential Snapshots.

Has the crisis affected you in other ways?

Strangely it has given us unexpected family time. Our oldest daughter lives in Edinburgh and our youngest is at university in Liverpool. David and I were getting used to life as a couple again, and although we were enjoying ourselves, the girls being home is lovely. We’re playing board games, cooking for each other, watching TV and going on some lovely walks. Being together has enabled us to keep our spirits up. We know that if we were separated, we’d be far more anxious about each other.

What do you think of the impact the crisis has had upon visually impaired people like yourself, and on other disabled people?

I think the crisis is hitting visually impaired people particularly hard. Many of us try to be independent but require assistance at times, when going round a shop, or when crossing a major road. The best way to do this is to take someone’s arm, but this is now impossible with social distancing. We also use touch to navigate – we may need to do this to locate a door handle, a lift button, read a braille label – again, this now seems dangerous. We can’t effectively do these things wearing gloves, as we can’t feel properly through them. It has meant that many of us have simply given up trying to do things ourselves. We’re either staying in or relying on other people.

I’m lucky because I’m living with my husband and children, all of whom can see, so I’m getting the assistance outside I need. Others are not. Shopping has been one of the biggest problems. I know that now it’s not as bad as it was at the beginning of Lockdown, but initially it became impossible to book a delivery slot with a supermarket. This meant that many visually impaired people who could no longer safely go to the shops couldn’t get food delivered either.

I think that the needs of disabled people, once again, have not been fully considered. We’re supposed to be living in an inclusive society, but the government’s daily press conference that so many of us were tuning into for up-to-date advice was not signed for Deaf people. It made it difficult for anyone who couldn’t hear to keep up with the rapidly shifting guidelines.

Again, food shopping has been an issue. Although shielded people have been looked after, many disabled people have not been able to shop in current conditions and have felt excluded. So much so that legal action has been taken.

Even the fact that the government has just insisted that all MPs return to the House of Commons to vote makes it difficult for any disabled MPs who might have additional access requirements as a result of current guidelines.

I don’t think we have been forgotten deliberately. I think it’s just that we still don’t feature in most people’s lives. They’re isolated from us, as we generally don’t appear in everyday society. Unemployment for us is still very high, so we don’t appear in the workplace. Access on transport can still be tricky, so you rarely sit next to us on the bus or train. We don’t often appear on television, read the news, host chat shows. We’re still an exception, not a rule. We’re easy to forget.

And finally, although the future is uncertain right now, where are you hoping to go from here with your writing?

After years in the margins, I’m aiming for the mainstream. I want to get into people’s living rooms and tell our stories. We do have some disabled actors in soaps, but not enough good storylines for them. So that’s what I hope to do, get in there and demystify popular notions regarding disability. Make sure that we’re not forgotten again!

Northern Broadsides make bold, radical and accessible productions of classic and new plays that both reflect the diversity and multiplicity of voices in the north, and act as a catalyst for change throughout the region. They place participation and artist development at the heart of what they do, to make the work accessible to a broader demographic and nurture a greater diversity of voices on stage. Each of their productions is made with a ‘creation squad’; a community to whom the piece is relevant; but also people who would not usually engage in creating theatre. This new model transforms the stories we tell together, re-invents how we make popular productions of classic plays and is set to discover a new generation of northern artists.

loved the films as did my wife

Hi..interesting article.
I live near New Brighton. I am very interested in the work that you do and wondered if I could get involved. I am a person with a disability and have some background in the visual arts and Drama.
Thanks.