On 17th August Extant, the UK’s leading company of visually impaired theatre-makers, is partnering with The Space to launch its online multimedia production of Flight Paths. Extant Artistic Director and CEO Maria Oshodi spoke to Natasha Sutton Williams about the digital adaptation of the show. 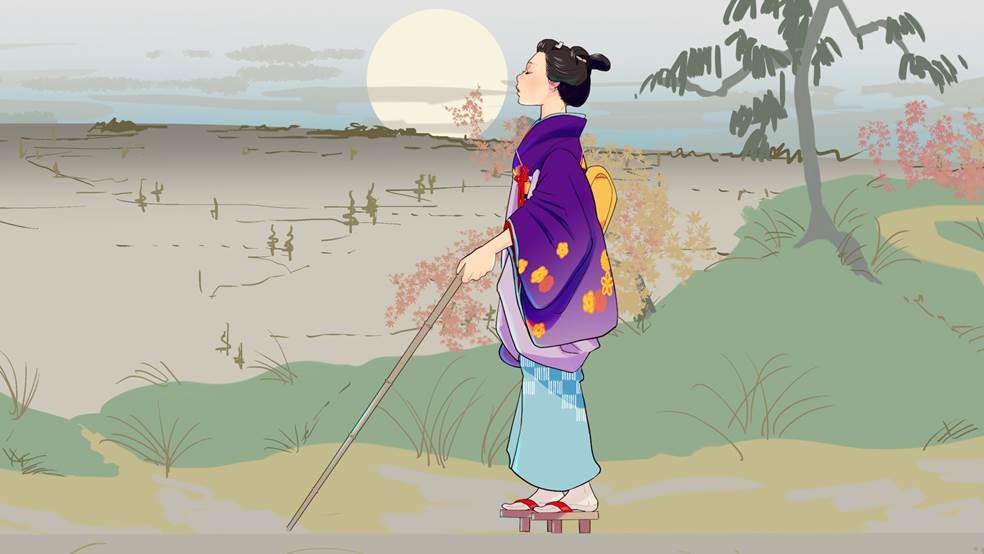 Flight Paths was first produced as a live touring show in 2019, and was inspired by the lives of the Goze, the blind female performers of medieval Japan. In the show, the Goze’s historic tales merge with stories of contemporary visually impaired female artists, creating a meditative reflection on travel, blindness and migration. This new digital re-telling of the production combines animation, aerial movement and creative audio description. Through interactive navigation, online viewers journey with the Goze through a unique, multi-sensory experience of Japanese cultural history and storytelling.

Since 2013, Maria Oshodi in collaboration with Kumiko Mendl of Yellow Earth, Vicki Amadume of Upswing and writer Glen Neath have steered Flight Paths through various stages of development. Initially the piece was going to be an outdoor show.

“We brought together a team of performers including Victoria Oruwari, a blind opera singer, Amelia Cavallo, US blind aerialist, and British Japanese actorTakashi Kakuchi. We worked together around music, storytelling, aerial, and song. We created some beautiful initial work that we realised wouldn’t be relevant to an outdoor setting, as we thought the nuances of what we were creating might get lost outdoors.”

She continues, “We focused on the idea of stories ofmigration. Our performers all had one thing in common: apart from being blind, they all come from different parts of the world. That’s very much in sync with the Biwa hōshi tradition in Japan. The Biwa hōshi were blind male artists moving about medieval Japan in order to earn their living. Then a blind anthropologist Kojiro Hirose, based in Osaka came to the UK and gave a presentation about the Goze, which at the time we had never heard of. The Goze are the female version of the Biwa hōshi, and are less well known, which is typical since women’s history is often buried. We found out about the Goze during the same time that we were left with only two female artists to work with on stage, Amelia Cavallo and a blind aerialist from Australia who joined the team, Sarah Houbolt. That’s when we shifted the emphasis from the Biwa hōshi to the Goze so that the piece is led by these women.” 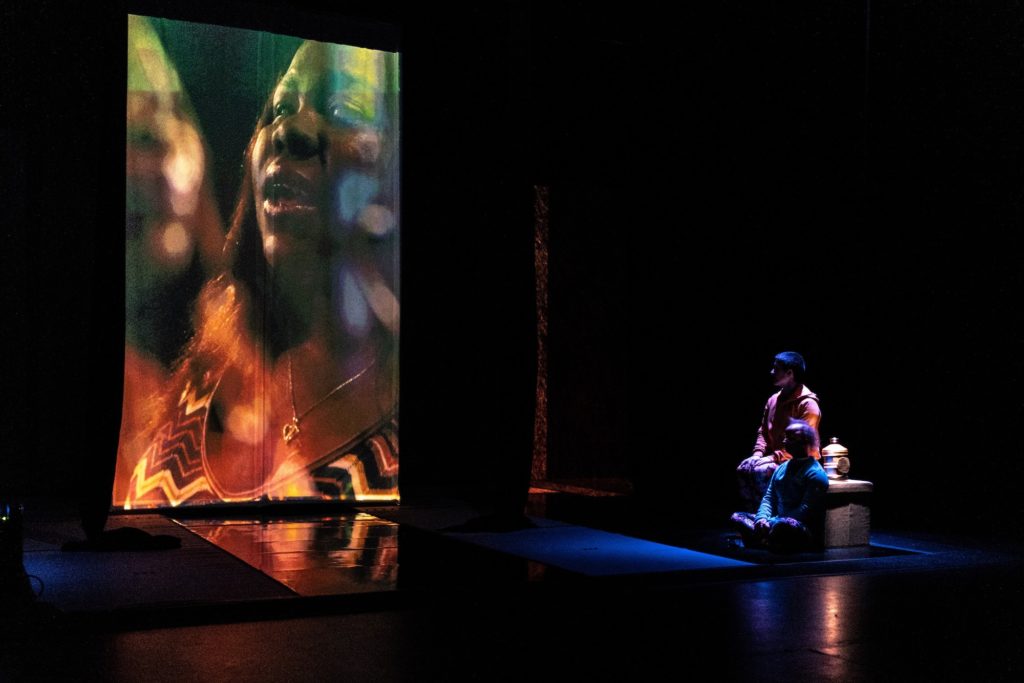 The singer Victoria Oruwari and musician Takashi Kakuchi weren’t able to do the 2019 live tour of Flight Paths, but it was important to Oshodi that their creative input and representation was embroidered into the heart of the piece as they had been part of the development process since 2013 and their personal stories were central to the piece. This was when the first discussions about the extent of how we would embed technology came into play.

“We were able to be much more fluid with Victoria and Takashi as characters than we were when they were physically present on stage. We filmed them and used their voices to travel beyond the screen in mini-rig speakers that are carried around in water bottles that the two aerialists carry with them. We also used the same experimental panning of sound across the aerialists during their routines. If you’re a blind audience member at the live show, the voice of the aerialists when they’re doing their audio description doesn’t come from speakers around the room, making you think they are somewhere else in the space, but rather the sound flows from the bodies of the aerialists. We worked with an impressive audio technologist, Tarim, who devised a method of panning the performers pre-recorded audio description, breathing, music and inner feelings, onto the performer’s bodies during their aerial routine. Tarim the operator of all this, almost became the third aerialist as he had to work in time, cueing the right element at the right moment.”

“It sounds bizarre, but when the aerialists carried these large symbolic water bottles which we put these mini rig speakers into. There was an embodiment of Kashi and Victoria in these bottles that the aerialists have a relationship with. These bottles were placed strategically on stage and were given spotlights at certain points when they were telling their stories. It was quite surreal and beautiful.”

A swathe of research went into the construction of the show, including an in-depth study of how the Goze were educated and lived their lives.

“The Goze would train for five years before they went out on the road. They played a stringed instrument called the shamisen, which would punctuate their stories and songs. They were visually impaired so they would teach each other to play by using their hands to guide one another. That’s something we chose to reflect in the way Amelia and Sarah teach each other to work with the aerial silks during the show. We try to link the traditional Japanese culture of the Goze with what’s going on now between visually impaired people who teach each other skills.”

Oshodi continues: “There were all sorts of other do’s and don’ts for the Goze, including the way they worked with blind women, and how they lived together. They weren’t allowed to have romantic relationships during those five years; if they did they were kicked out. The ones that did pass their training would travel the country as performers. The woman with the most sight would be at the front of their traveling brigade. They all held on to each other and travelled across really rough, mountainous and cold terrain. The Goze had all sorts of spirituality associated with them; they would be brought in to bless the silkworm harvest.”

For the digital adaptation of Flight Paths Oshodi has collaborated with illustrator Inko Ai Takita, animator Dave Packer, editor Nic Sandiland and web consultant Tim Jukes. As a viewer, you enter into the digital world and meet one of the Goze who introduces herself. She is at a crossroads in a rural Japanese setting. You get to choose the direction you want her to go in and she will take you to the first major step in the story, where you enter the first episode. You can make more navigational decisions which impact on the direction you take throughout.

Oshodi has woven expressive form directly into this new adaptation:

“We’re trying to keep to the central theme of travel and journeying because that’s what the Goze did, that’s what these contemporary blind artists or contemporary Goze are doing, and that’s what you are doing as the viewer. It’s very gentle, it’s not like a video game, you haven’t got that adrenaline-pumping element. It’s thoughtful, meditative, there’s something haunting about it. Ultimately the piece is about finding this global community of blind people, not only in terms of the spatial dynamic, it’s time based. It’s historic.”

Oshodi is right. Her team of performers are reaching through history to clasp hands with the Goze, traveling through space and time, giving voice to their stories.