off my meds and other stories by Matt Barrell is a series of short graphic stories depicting the impact of psychosis on everyday life. Review by John O’Donoghue 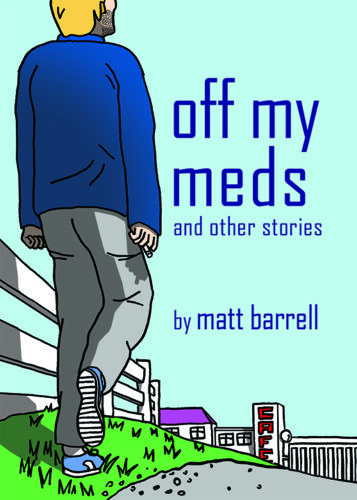 Matt Barrell is a graphic memoirist in a line of artists that includes Ian Williams, author of The Bad Doctor, published by Myriad in 2014 and Sabrina Symington, whose First Year Out: A Transition Story was published by Singing Dragon Press in 2017. You might associate comic books with naughty children like Rodger the Dodger or The Bash Street Kids, or superheroes like Spiderman, The Black Panther, or The Fantastic Four, but graphic formats can countenance more serious, adult subject matter as Williams and Symington illustrate, if you’ll pardon the pun.

The fusion of image and text, of panels and drawings, speech bubbles and thought bubbles, places the graphic memoir somewhere between the comic, autobiography, and storyboards. It’s inherently cinematic, drawing on filmmaking as much as memoir, the panels sometimes sliding forwards like frames in a film, sometimes exploding out of the page, playing with colour and black and white. They’re like little films you can carry in your pocket or your bag, and ‘watch’ on the bus or the train without having to make sure the battery of your device is charged, or putting in your ear plugs. You can also, of course, peruse them in the privacy of your own home.

Matt Barrell brought out the first volume of his experience of living with psychosis in 2018. This was Nightmare Scenarios, a little full-colour comic that portrayed some of the characters he’d met on the psychiatric merry-go-round in North London.

I reviewed it for DAO when it came out, and was left then with a desire to see something more directly autobiographical from Barrell. off my meds departs from the one-page-per ‘nightmare scenario’ of the previous book to give us front and centre the author’s own experience.

This time, he opts for a basic black and white, more or less conventional, comic strip format. The book contains four inter-linked stories, off my meds, a mess of blues, can’t breathe, and no metal. The first story begins with a text box at the top of the first panel that plunges us straight into the story:

I’D BEEN OFF MY MEDS FOR ABOUT A MONTH WHEN THE MENTAL HEALTH TEAM CALLED, JUST BEFORE FIVE O’CLOCK IN THE EVENING.

Here is the classic point at which many of us descend back into psychosis – coming off the meds. Barrell is sunk in a world of religious delusionality – why are so many psychotic states filled with ideas and images to do with God and the Devil? – and believes Old Nick is talking to him.

Over the course of three pages Barrell gives us a little narrative of missed appointments, the insidious voice of Old Nick, and the mental health team coming round to check on him. Eventually, he decides he’s had enough of the ‘experiment’ – to stop taking medication – and go back on his meds. 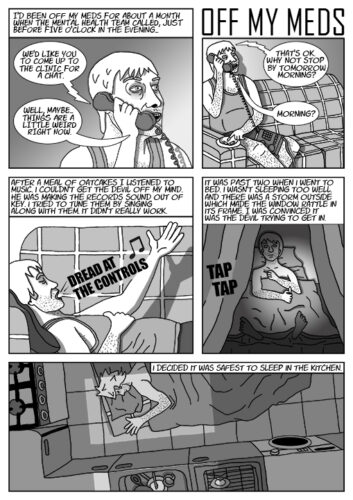 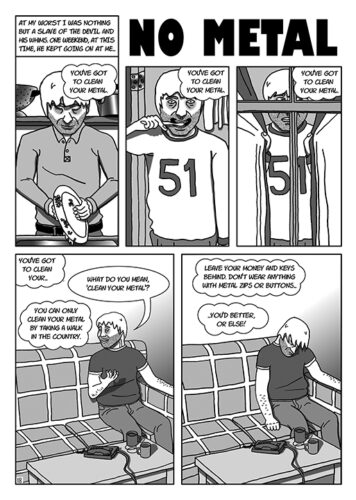 a mess of blues comes next. The antipsychotics have been making him ravenous, but have also robbed him of the energy to cook. So he starts ordering takeaways – every night of the week. Kebabs, chilli, curry, cheeseburger and chips, fish and chips, pizzas, Caribbean… But Barrell’s council flat is now filled with wrappers, and they’re starting to whiff. It’s only when his Community Psychiatric Nurse, Jill, comes round and issues an ultimatum – clean up or I’m informing the Council – that Barrell ‘gets a waggle’ on and tidies up.

Next comes can’t breathe. Barrell begins this piece of his story with a very poignant reminder of one of the terrible consequences of psychosis: ‘… it isolated me from the people I loved.’ Finally, after six weeks without talking to anyone, Old Nick makes a reappearance and suggests he goes out and chats to random strangers in the street.

But he gets the brush off, and in one case a threat of violence from – of all people – a florist. He starts raving, convinced that people around him are his enemies. He has a panic attack, unable to breathe. But then – a Good Samaritan.

He listens to Barrell’s problems – he’s isolated, he has no one to talk to, his family want him evicted from his flat… His new friend suggests he calls his doctor and tells him how he’s feeling. But there’s a twist… I’ll leave the reader to find out what it is, but Barrell is soon back to square one.

Barrell’s final piece is all about another command from Old Nick: ‘You’ve got to clean your metal’. The only way this can be done is by taking a walk in the country. So off Barrell goes… From North London all the way to St Albans…

I welcome this graphic memoir. It gives a great insight into the world of psychosis, a frightening and at times disturbing world that sits alongside our own, the daily struggle to just get by in a world beset by cuts and now Covid.

‘off my meds and other stories’ is £6 (print copy) and £4 (digital copy) from Matt Barrell’s website, Psychosis Today. The artists’ blog is also worth following on the same website.

Thank you for telling us about this and showing us your work of art. In fact, such things need to be talked about and it will prove to such people that this is an ordinary history of struggle and there is no such factor as laziness. Because people with similar problems are often met with condemnation from the community. And of course, it doesn’t help in solving their problems. We should all just be more understanding and empathic, and then I think this world will become a much better place for our life. Let’s be kinder to each other.