18 artists with lived experience of mental health conditions exhibited in Oxford recently. Deborah Caulfield visited and talked to two of the artists about their work.

Making art can quieten the mind. Sometimes it articulates how we feel about the nonsense going on outside our heads, the mad stuff that makes us mad.

Or maybe none of the above applies, because life is too complicated, too dreary, or too shit to depict.

As well as showcasing the work of the artists, this exhibition was about raising awareness of mental health, helping to remove the social stigma that mental health is still steeped in.

What Goes On In The Mind brings together a diverse range of artwork and artists. The exhibition was co-curated and hosted by Oxford based AIMS and London based Mental Spaghetti, both peer support groups for people with lived experience of mental health conditions.

All manner of work was here, something for everyone: embroidery, 3d work, drawings, photographs, sketchbooks, and paintings.

Labels are not always helpful. Art, on the other hand, saves lives.

Sarah Warren told me that when she is struck by the sudden need to draw, she has to stop everything. Often there’s a scramble for materials; any surface will do, even the kitchen wall. Sarah’s work is abstract, small-scale, urgent, fluid. Nothing is planned; her art happens there and then in a compulsive rush to ‘get it out’ before her head explodes. The title comes later when she reviews the work, when she sees what’s there.

The planned precision of Yvonne Mabs-Francis’s work is altogether different, in terms of content, style, scale and execution. Her detailed and carefully crafted images don’t happen by chance.

When I mentioned a similarity with Frida Kahlo’s work, Yvonne told me she hadn’t seen the Mexican painter’s work at the time she did these paintings. I believe her but the likeness exists, nevertheless.

She said she’s often asked if painting her experiences was cathartic. It wasn’t. Rather, it was a cold, hard re-telling of a mental breakdown following her father’s death when she was 24. The worst aspect was the doctors not talking to her.

Which is why her paintings are always accompanied by text, to assist understanding and to promote discussion. The Electric Bed depicts a particular delusion where Yvonne believed her bed was wired up for midnight electrocution via a mysterious box on the wall. A clock shows five to twelve.

The text doesn’t refer to the Electro-Convulsive-Treatment that she received during her three month stay, but I can’t help thinking there’s a connection, so to speak.

This painting was the exhibition’s stand-out image for me. Technically highly accomplished, the paint glows and the space is suitably vague yet real. The artist told me she struggled with the colour of the figure, and the drawing of the bed. Which points to her brilliance, because it all works beautifully.

The heat of the body, the night sweats, the vulnerability and fear, are all well conveyed. Likewise the starkness of the bed, the lack of human touch, the way the infinity of the external world merges with the rigid interior, an ambiguous yet convincing three dimensional third place.

The hair flows down and over the floor. A lone flower head, perhaps symbolizing hope, rests on the floor beside the bed, almost out of frame. A barely detectable skull hovers in front of this scene of near-but-not-quite death.

I couldn’t get into Tim Bradford’s Patchwork Landscape paintings at first. But I looked, walked away, read the text, returned and looked again.

The sky is somewhat lacking in ‘She is Over the Water’ and I wasn’t entirely convinced by the hill point. But the green patches, the quality of line and paint, and the variety of hue are surprisingly effective, and fun.

This is one of a pair that Tim painted in Doolin, Ireland. He wrote: “I felt in a heightened state of awareness for most of the time… In this painting I’m trying to open out the abstractness of the west of Ireland landscape while highlighting the fragmented nature of modern lifestyles…”

Opportunities for engagement and dialogue with people for whom rejection and social isolation is often the worst aspect of their condition, don’t come around often.

Whatever the motivation and results, artwork created by people with mental health problems needs to be seen. But not like this. There were clear problems with the gallery space. Never again do I want to see a painting hung in front of a huge window, or delicate 3D boxes balanced on a window ledge.

Art can be for and about many things; above all its business is communication. The question is, is enough attention being paid to it? / are we paying attention / is anyone listening? 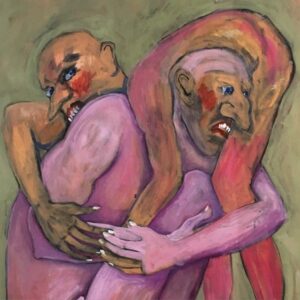 Mental Spaghetti is an Outsider Art organisation whose name fits the aesthetic of their exhibition The Mind Machine, which took place at the Menier Gallery, London from the 18th – 23rd January. Review by Colin Hambrook. Curated loosely around themes of portraiture – portraits of the self, portraits of the imagination, and imaginative portraits of states ...

wish i could get there to see these, im hundreds of miles north tho. all that i’ve seen / read here is brilliant, keep at it, arts particularly needed during times like these. also wanted to say followed the link to more of yvonne mabs-francis work – and the audio – absolutely stunning work there – i hope yr paintings get widely seen, they deserve to! love & rage sean