As part of his series exploring the Social Model understanding of disability and the affect it has had on the lives of disabled people, Dave Lupton talks to Michelle Baharier FRSA, disabled artist and former CEO of CoolTan Arts and Artistic director of the newly formed Fruit Cake Creative’s. 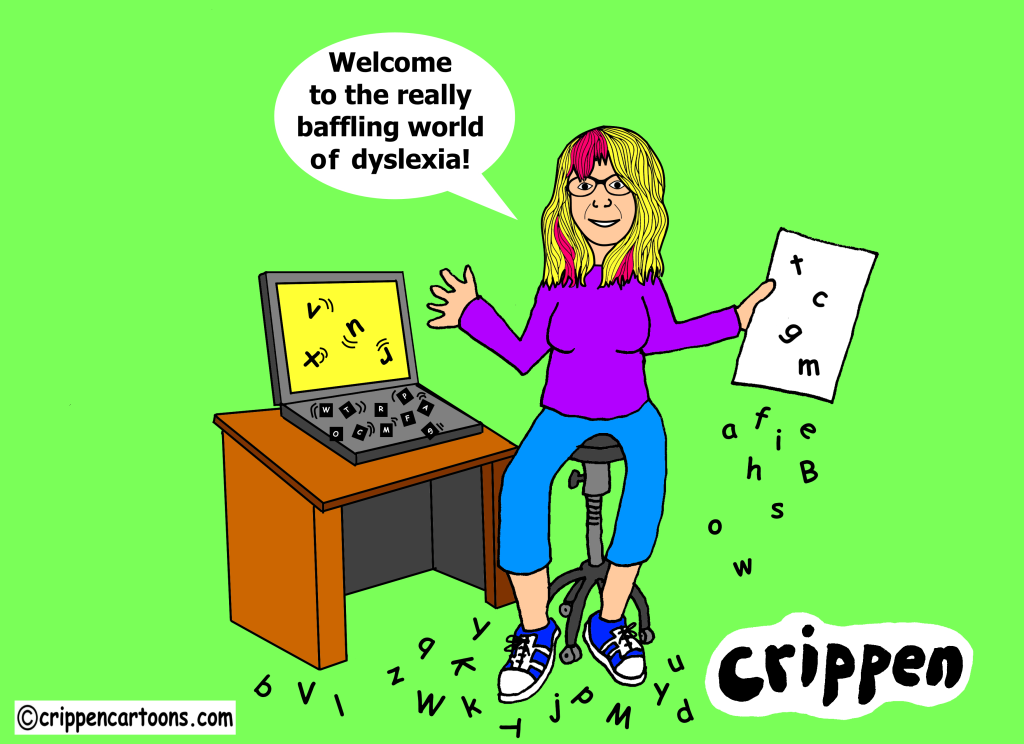 As well as experiencing periods of mental illness/distress and having physical impairments, Michelle is also severely Dyslexic and told me that she wants to talk about this and show just how this creates one of the biggest barriers for her. Michelle thinks that it will help our readers if she tries to show just how difficult it is for her to communicate, even using a speech pad. Our interview was therefore conducted using email, with Michelle sometimes resorting to typing each word when she was unable to make the software understand what she wanted to say.

“When I write and when I read, numbers and letters jump around on pages and it can be hard for me to stay on the same place on a page without a marker. Therefore, using a computer can be even harder than writing by hand. Equally using computer speech to text. Often I can’t read the words it types and am always anxious about it typing a wrong word. So I often compromise by using words which are less complex to say. I am often left unable to choose /know which word is correct to use, for example: ‘sear, seer, sere, altar, alter, draft, draught, flea, flee’ … you get the idea.”

“My dyslexia will not only affect the written word but also the spoken word as I cannot pronounce many words properly. This again makes it very difficult for a speech to text environment. In reality I need a personal assistant (PA). However, a PA through access to work for people with dyslexia is impossible to get. I suspect that the reason is that our condition is not understood.”

To add to this Michelle also has an eight-audio deficit which means that she cannot hear certain sounds. When she attempts to expand on this and use the term “but I am not deaf”, the speech to text software tells me that she is “not dead!” When I query this, Michelle then has to type out the word DEAF. Again, she mentions that a PA would have been able to check her email for this type of error before she sent it out. 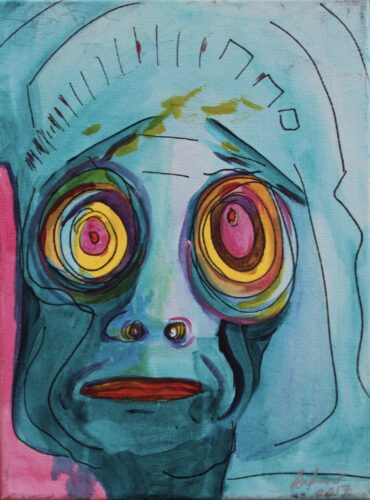 Michelle adds: “I think it’s really important for people to understand that speech to text is arbitrary and can produce some fascinating and unwanted results. It wasn’t much better before computers when we had to use a typewriter. Although it was slow, at least it was more accurate!”

Michelle also has issues with her short-term memory, and she easily forgets what she is writing. Therefore, the errors caused by speech to text can be extremely frustrating and can break her thought process. Michelle therefore finds it easier to write by hand first and then dictate it to the software.

Relating back to her childhood, Michelle told me that two weeks before her GCSE’s she was offered a tape recorder to put the answers to the exam questions on. Not having any previous experience using the machine, she declined, and was just offered a small amount of extra time as compensation. As an adult, her attempts at retaking some exams resulted in the same barriers being there for her even after all this time – and supposedly designed for someone with dyslexia!

When Michelle was employed within the Civil Service, this was one of the most hostile environments for someone with an ‘invisible disability’ such as dyslexia to work in. At one stage she was asked to remove a signature note from her emails on the judgement that it was not considered professional: “The signature note at the foot of every email I sent stated that I used speech to text software and that there could be unintentional mistakes in the body of the text. They seemed to be able to relate to the physical impairments that I experienced and also during periods when I experienced mental illness, but my dyslexia was one step too far for them to even consider making reasonable adjustments!” 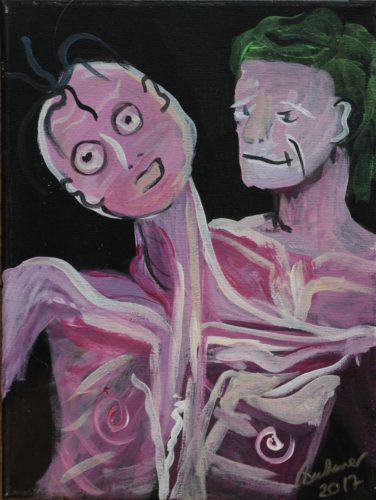 Currently Michelle also offers disability equality training which includes introducing people to the social model understanding of disability. However, this has its problems as she explains:

“It’s not that straightforward (the training) especially when you have a sound deficit so when people are talking at the same time or when someone is very quietly spoken, it can be exceedingly difficult.”

“When I train people about the social model of disability, I used to create cartoons/comic strips of wheelchair-users going into buildings using a slope rather than a flight of stairs. Or sometimes it would be a chairlift.”

“There are other difficulties. I can count but I cannot repeat sequences of numbers and letters. I cannot copy easily from a board. Here the speech to text misinterpreted this as “from abroad.” The minute I lower my head from looking at the board to looking at my piece of paper, I’m usually not able to copy the letters down correctly or in the right sequence. I also need much more time for this process which is another problem. In this and similar environments, people just can’t see that you need help or are stressed” she added.

Michelle also struggles when people over the phone use the phonetic alphabet to spell out words (Alpha, Bravo etc), as her audio deficit allows for even more confusion. She told me: “I therefore have to ask people to say A, B, C etc. It also means that people need to speak slower which doesn’t seem to be easy or natural for everyone.”

Michelle told me that she does not think that people with hidden impairments like dyslexia are treated seriously.

“I think many times as well invisible disabilities are not given the attention needed because the majority of the time you can’t see that I struggle [Another example of speech to text malfunction. This sentence translated as: “many times exactly said visible you can’t see that ice does I look all right to.”]

Michelle added that things also get compounded, and she can experience imposter syndrome. This leaves her with feelings of inadequacy and chronic self-doubt and a sense of intellectual fraudulence that overrides any feelings of success or external proof of her competence.

Having organised and then raised thousands of pounds in funding for her community based projects; having set up a company from scratch that supported over 3000 people; having provided face-to-face support and mentoring to disabled people over the years, Michelle certainly has no cause to feel inadequate. She has a set of amazing skills that are often hidden behind the barriers that society imposes upon someone with dyslexia or one of the other hidden impairments. 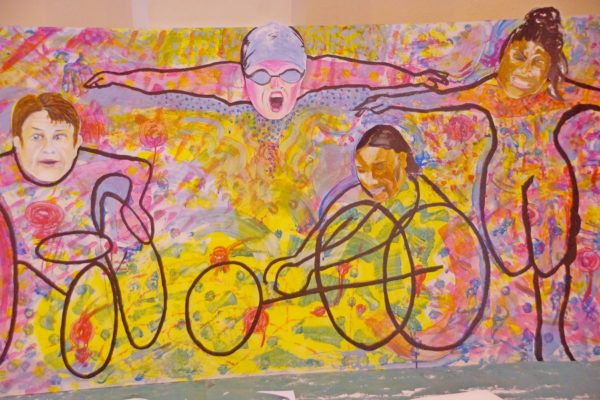 Michelle also spoke to me about the problems she has encountered when applying for different jobs.

“When it comes to applying for jobs I get nearly every interview I apply for, however when it comes to the moment in time when the job is between me and someone else 99% of the time it goes to the other person. I understand that this is due to other people not needing PA support to proofread for them, for example. They do not acknowledge that a reasonable adjustment would mean providing me with a PA as part of the job.”

To conclude our discussions, I asked Michelle how she felt that the Social Model had helped her to overcome the barriers that her dyslexia created for her. She told me that the Social Model allowed her to identify and understand that the dyslexia was not her fault, but that as most non-disabled people had never even heard of the social model, it did not help her much in the real world.

She added: “There is also a lot of prejudice. People think I am stupid, or thick or both. This can be awfully hard to tune around peoples understanding of learning difference, or neurodivergence as it is now called.”

Michelle explained: “Dyslexia means that my verbal and written communication is often very direct. People may be offended by this as I do not have the range of vocabulary that others have. They often don’t like my directness.

I also miss out on jokes, as very often they rely on a mixed understanding of verbal and written communication. People seem to react quite quickly to this and see it as a failure in me. This sometimes escalates, like on social media, with quite a lot of prejudice directed at me.

Note: Michelle was Chief Executive of CoolTan Arts until she was dismissed following a period of ill health. The disabled people who used the resource and her many friends within the disability community expressed their upset about the way in which Michelle was dismissed. They created a petition on Change.org to have her reinstated. We now understand that CoolTan Arts has ceased trading.

Michelle’s new venture ‘Fruit Cake Creative’s’ is up and running and delivering walks and stories around Bermondsey. You can contact Michelle to get involved in this exciting new project by emailing her on mbfcsra@gmail.com and you’ll be sure of a warm welcome.