Molly Joyce talks to New York-based interdisciplinary artist Jerron Herman about disability, dance and his ongoing journey into making work through the combination of dance, text, and visual storytelling.

“The physicality of disability is so prevalent in dance… to an extent my job is to show the unknowns of it.” “It’s the vignette of life with disability I am most interested in… showing you how disabled people thrive.”
Jerron Herman

In late 2017 I was writing music for a video featuring dance, at a time my work was progressing to embrace disability more and more. I was working on a song that reflected notions of body and being from a disability perspective, and was looking to collaborate with a disabled dancer. I came upon a video feature on Jerron Herman on Great Big Story and was mesmerized by his fluid and captivating movement. We are both performers with an impairment on the left sides of our bodies who share an interest in emphasising the place of disability within our work.

Herman responded to a message via LinkedIn, and thus began our collaborative endeavors. These include the Body and Being video with The Roof, live performance Phys. Ed. / aREST / Phys. Ed. BALANCE by Herman at Gibney Dance, and more recently Breaking and Entering, an evening-length work that premiered at New York’s Danspace Project in November 2019 that explores our parallel impaired left sides through divergent yet uniting facets of congenital and acquired disability.

Excerpt from ‘Breaking and Entering’

I was fortunate to sit down virtually with Herman in June 2020 to hear recent thoughts on his ongoing practice, relation to his intersectional identity, and how that has developed. Herman grew up Alameda, California in the San Francisco Bay Area, a pivotal center for disability activism. When he moved to New York City for college he wanted to be an artist and specifically a playwright, however was creating narratives that didn’t explicitly deal with disability. He thought the stories could be neutral, and that his personal self and identity would be exposed with his physical presence as a Black disabled male at the theater, rather than constructing the narrative around such, and as he states: “being a disabled artist but not necessarily creating disability work.”

This approach shifted once Herman started dancing. When he was an intern at a theater company he met choreographer Sean Curran who was intrigued by his openness and facility with movement. Kern introduced Herman to Heidi Latsky, who leads a physically-integrated dance company in New York. Soon after Herman become a company member of Latsky’s company, dancing throughout New York and beyond.

Herman describes how through moving and exploring his body, the disability aesthetic became “almost inescapable… my movement and aesthetic literacy increased in terms of how to use disability and why”. He adds that now he will always engage disability, as it “sustains my curiosity and there is always more to be uncovered.” He has found a breadth within the work exploring the legacy disability history provides, using that knowledge as prompts.

Herman has become increasingly active as a solo and collaborative artist, taking part in Relative – a celebration of Crip dance parties with DJ Kevin Gotkin, as well as becoming a member of Kinetic Light, led by choreographer and dancer Alice Sheppard with dancer Laurel Lawson and designer Michael Maag.

For Herman collaboration and interdependence are essential to his ongoing practice: “working within disability has changed my idea of what a production looks like, what to expect and value within the industry.” He now highly values interdependence, time to collaborate, and not being the only one showcasing. Herman sums up the beauty of being a disabled artist and always re-examining and evolving one’s relationship to self, practice, and identity: “I am in a state of relearning what it means to be an effective artist.” 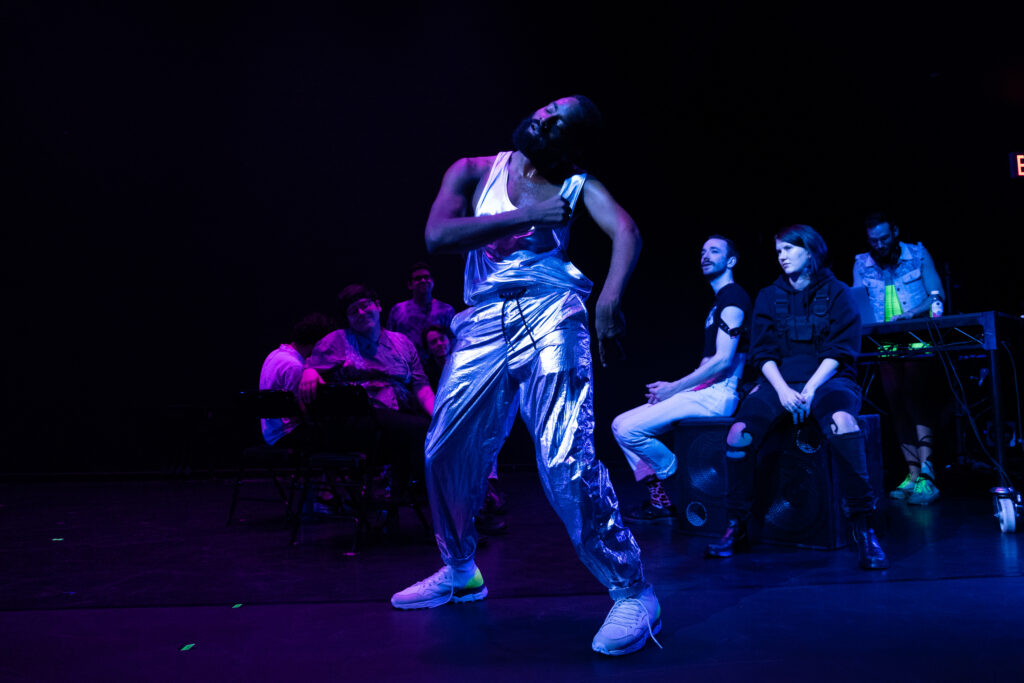 In addition to interdependence and relation to the audience, Herman remarks that if he fails to provide comprehensive access, he has “to trust the community to insert their needs/intervention into the experience as well…that there’s room for them to create that beyond me.” He seeks to imagine how we go beyond compliance, beyond access costing too much and not matching up with marketing metrics. He favors “speciality that’s actually universality,” and finds the welcoming factor of access much more interesting and essential than the idea of compliance.

Herman furthers this by stating that an “access check and integration is going to happen no matter what where I am working.” This critical reflection illustrates the singular breadth of Herman’s practice and overall outlook. As he describes, “it’s the vignette of life with disability I am more interested in…showing you how disabled people thrive in the workplace, about assuming they are already there, the body is already there, and that’s the thing I don’t see enough images of…disabled people living and thriving.”

Lastly, Herman describes how making work about disability is more direct for him, and he is still understanding the expressions of his Blackness, maleness and those expressions in regards to living such identities and the statistics that apply to them. “One day being a black man, I have a set of statistics that apply to me, that changes with being black and disabled, male and disabled, and so on.” He is especially interested in the “past legacies of Black disabled men, how they would have lived, experienced life, made stuff, in a place of looking back to understand the terrain I’m walking into and how to sustain as a person, being, and body.” As he concludes, “I am a disabled artist, but I also say I am interdisciplinary artist. I am multifaceted, and my own perception of what a disabled artist means has evolved and that’s a good thing.”

To find out more about the work of Jerron Herman visit his website: https://jerronherman.com/