My Mother Said I Never Should by Charlotte Keatley, performed at The Lowry Theatre, at Salford Quays, on 4 March 2020, was premiered at Contact Theatre, Manchester, in 1987. fingersmiths returned the play to its Manchester roots with this production. The play follows the life stories of four generations of women spanning a period of 50 years. Review by Ruth L. Malkin 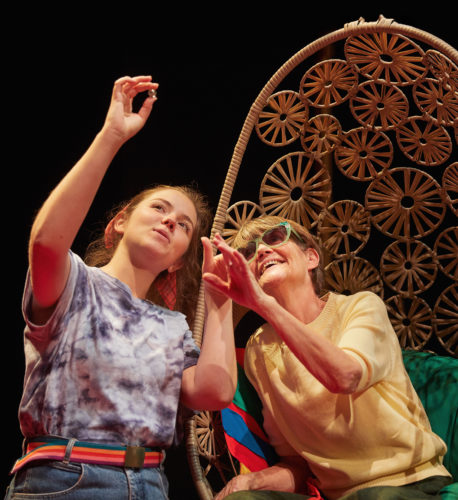 The production bursts into life with girls at play. Immediately, the action struck a nostalgic chord with all the women in the audience, I’m sure. The initial youthful exuberance gives way to the age-old struggles of women – the choice between motherhood or career. Doris, played superbly by Ali Briggs, who moves effortlessly between childhood and old age throughout as the action skips from the 1930s to the 1980s, is forced to stop working by marriage and maternity.

The child Margaret (Jeni Draper) declares she will never have children but becomes a mother to a daughter, and then brings up her teenage daughter’s child as her own. Jackie (E J Raymond) hands over her child to her mother to focus on her artistic career, and then resents her missed opportunity to be a mother. Rosie (Lisa Kelly), throughout it all, is brought up with love, and nurtured by three women who have all sacrificed their lives for her happiness, only to discover that the women in her life have deceived her. All the characters in this play express a certain amount of regret over their life choices.

The set was a mix of domestic kitchen sink and an abstract, dominating slide, used to interesting effect to represent different environments. A multi-media screen was used to indicate time frames and to provide captioning. This set up meant that the captioning was some way from the performance, which occasionally made it awkward to follow the dialogue alongside the action. Time frames were signified by choice music to represent different eras – the playlist was as nostalgic as the reminiscences of the characters. The sound track was reinforced with projected images on the screen to enable those who can’t access music to gain reference to the time frame.

The first half is quick fire, light and breezy, passing perhaps a little too quickly between the different decades, which may be why it came to a rather abrupt end that left the audience wondering whether to applaud. The tension really builds in the second half when the interactions between the four women expose the lies in their relationships. The interactions are captivating, as the secrets unravel and the resentments are revealed. I particularly loved Doris reminiscing about her rise in social status, symbolised by a shared silver teapot.

The fingersmiths’ production matches the weaving together of women’s stories with BSL, English and sign supported English. The actors manage the extra demands placed on them by this brilliantly, not only switching effortlessly between childhood and old age but also between English and BSL. However, I found combination of BSL, captioning, and voice-overs difficult to manage – made worse, unfortunately, by the poor-quality loop receiver I was given at the venue. This meant I lost some of the dialogue. I wish that theatre producers working with d/Deaf people would understand that, for lip readers, voice-overs need captioning too.

Overall, the use of sign language throughout felt a bit experimental. It was ambitious of fingersmiths, with such a small cast, to try it. It is such an improvement though on the BSL interpreter at the side of the stage – so let’s keep trying to find a model that works for everyone. I did wonder whether sight impaired people would have struggled to follow the switches between time frames, but I have it on good authority that the audio description was amazing.

I was glad to see this play revived in Manchester so close to International Women’s Day, and it was great to see that the actors had made the effort to learn the Manchester BSL dialect. It reminded me how far we have come even since the time it was written. Women don’t have to make such stark choices any more, and BSL is no longer forbidden either. In this production, fingersmiths not only celebrate the lives and choices of women – it is a celebration also of deaf women and our struggles in a world of half heard, half understood stories.

My Mother Said I Never Should is  on tour and will be going to Northcott Theatre, Exeter on 10th and 11th March (7.30pm). Derby Theatre Studio on 13th and 14th March (matinee 2pm and evening 8pm), Birmingham Rep The Door 16th, 17th and 18th March 8pm, finishing at The Albany @ Canada Water on 20th and 21st March (7.30pm). There are also aftershow discussions at all venues – check the dates on the fingersmiths website.