Aetlier Corners, an organisation that works with learning-disabled artists in Osaka Japan, brought the work of three of their artists to the UK with the help of Pallant House Gallery, Outside In, Unlimited (administered by Shape and Artsadmin) and the British Council for the Unlimited Festivals at Southbank Centre and Glasgow’s Tramway. Review by Joe Turnbull. What makes an artwork a piece of ‘Outsider Art’? Is it a certain aesthetic? A lack of traditional training for the artist that produces it? Or does it denote an artist from a specific background or community? Clearly, it is a fluid category but if we take the latter as an indicator of Outsider Art, this surely has profound implications: is it not problematic to classify all disabled artists as ‘outsiders’? Is the term empowering if taken ownership of or is it merely another method of othering an already marginalised group for the mainstream art world?

It’s not clear that the three exhibiting artists Koji Nishioka, Makoto Okawa or Yasuyuki Ueno would identify as such. Judging from the comments of Aetlier Corners’ founder Takako Shiraiwa that she sees their work as ‘simply art’, one would guess not. Personally I’d go further. This is good art. In fact, at times it’s great; vibrant, essential, life-affirming art. Nishioka’s pen-and-ink renderings based on real musical scores have an alluring fluidity. They actually have more in common aesthetically with Japanese calligraphy than Western styles of orchestration. That’s perhaps fitting given that the pioneers of graphic scores in the Western tradition such as John Cage were heavily influenced by Eastern philosophies.

Nishioka apparently showed an affinity for classical music as a baby, and would stop crying if his parents played it to him. The scores have an innate musicality in a visual sense, but it’s more akin to a jazzy improvisation than an orchestra at full pelt. The newer scores gradually move further to one side of the page due to an astigmatism Nishioka has in one eye. All good artists adapt and evolve based on new life experiences and this just feels like that process catalysed.

Ueno’s work consists of his own idiosyncratic take on the pages of Vogue. He, like, most of Western society, is apparently obsessed with beauty. Whilst the work is beautiful, it is a sort of inverted, subversive, alternative beauty. His representations of the airbrushed supermodels have unusual features of the type you’d never see in Vogue; they apparently resemble his own face. It’s certainly a novel way of getting less homogenous ideals of beauty in such a context. The paintings of Okawa are imbued with a sort of latent fervent energy which exudes from the canvas. They are notable for their bold colours, unique characters and a freedom of movement that hints at an almost Basquiat-like abandon.

But the real stars of the whole show are Okawa’s ‘makoot’ dolls made of wool. It’s as if the colourful, psychedelic characters that inhabit his paintings have become sentient and walked off the canvas. All have a humanlike appearance yet encompass a galaxy of colours and array of weird but wonderful shapes. And yet they all have a similar, fixed expression of joy which belies the turmoil, anger and anguish that apparently went into making them.

This feels deeply poignant. We all feel a pressure to maintain a happy veneer despite our inner tumult but this pressure must be even greater for learning-disabled people, especially those involved with institutions, and for many, bottling up their emotions simply isn’t an option. Or perhaps they are an exercise in the artist creating a world he wants to see.

The work of the three artists seems unrelated thematically, yet they sit together quite comfortably in terms of aesthetic and approach. Nevertheless, it’s not obvious that it has had a clear curatorial eye over it. But if this exhibition proves anything, it’s that we need to see more work by learning-disabled artists in mainstream contexts, whether it’s Outsider Art or not. Isn’t the best work that which is informed by unique experiences and perspectives? Namo Āto has that in spades.

This article was originally published on thisistomorrow. 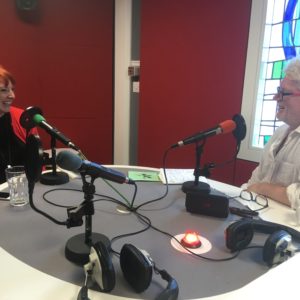 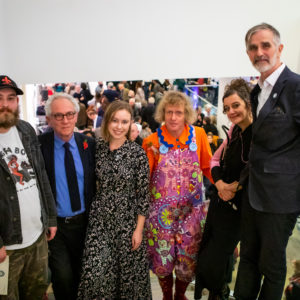 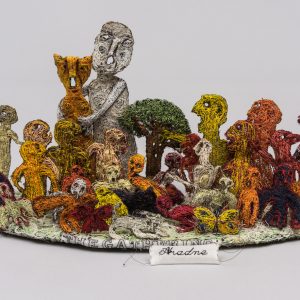