Liz Porter reflects on the experience of the touch tour and audio described performance of the National Theatre’s production of The Threepenny Opera, currently playing until 1 October. Written by Bertold Brecht and Kurt Weill, the NT’s production is a collaboration with Elisabeth Hauptmann in an adaptation by Simon Stephens. The National Theatre have a long-standing reputation for providing assisted performances with a well established system and access mailing list in place. I hadn’t been to a NT production for a while so was pleased DAO asked me to attend their production of ‘The Threepenny Opera’.

The National’s hard work around audience engagement has paid off – lessons to be learnt and passed on for venues just venturing out. Over 30 visually impaired people attended a pre-show touch tour and performance. The pre-show notes available on CD and in MP3 formats sent out to audiences in advance were excellent with basic set descriptions, plot context and cast lists (also available in alternative formats).

They had really thought about access support too, providing one-on-one sighted assistance through their well-trained front of house staff who were there to help throughout, which made a real difference to our visit and meant that individual blind and partially sighted people could go on their own if they wanted to.

Over years the NT have developed their blind and partially sighted audience and have a number of people offering regular feedback to their access offer. Audio Description is factored into their programme, which is advertised well in advance of shows (including being a part of the pre-show notes).

The NT’s pre-show touch tour was brilliant. Gaining a knowledge of the size of the stage and having the chance to get up close to some aspects of the set, costumes and props certainly helps. Cast members were on-hand to help with the touch tour. We met Rory Kinnear (Mack the Knife). It would have been good to have met some of the other actors in main roles. However, several of the minor characters took part, including Jamie Beddard (Matthias AKA The Shadow) and his golden throne (a fantastic golden steam-punk wheelchair). Meeting the cast provides an opportunity to hear people’s voices, which definitely helps a VI audience, but I’d like to see more companies taking a leaf out of Vital Xposure’s brilliant exploratory approach to touch tours where the cast members appear in character. This brings an experience to life and informs a VI audience’s relationship with a character’s voice. It also makes for a more creative dialogue. Audiences can more easily identify characters once the play begins.

Many venues are just not there with AD experiences. A touch tour, an access table and provision of mini-sets can also really help. But if you’re starting out with audience development it’s really difficult to draw people in: don’t underestimate this challenge. I’ve been to several touch tours this year and mostly I’ve been the only partially-sighted audience member for the shows.

However, I think these experiences are an opportunity non-disabled audiences would enjoy too, as it provides a fuller understanding of the performance, as well as being fun and informative. So perhaps there is scope for companies to consider providing touch tours for general audiences as a package deal.

The National Theatre mainly opt for the traditional approach in AD delivery via headsets with two describers sitting at the back. Describer’s this time were Ros Charmers and Willie Elliot. Having seen GRAEAE’s production a couple of years ago where the AD was delivered on stage in character, I was keen to experience the contrast.

The National Theatre’s production is energetic with fantastic staging and an inventive set. Great casting too! Jamie Beddard (Matthias aka the shadow) was in his element! Making choices on what to include or leave out, would be a major task for any describer – especially when there are so many set changes, and 21 actor/ musicians!

A blind or partially sighted person has to work hard to concentrate to take in information in a world that is predominantly ruled by visual images. 75% of information is visual. The range of visual impairment varies enormously and people’s range of access need, can vary enormously.

Reflecting on comparison between GRAEAE’s production and this, one I came to the conclusion that it would have been brilliant to have had both approaches to AD at the same time i.e. character description on stage and via headsets for the closer detail. This means the access provision becomes less hidden and potentially more imaginative.

Lastly I would say there is sector need to embrace the next stages for AD collectively. EXTANT, GRAEAE and Vital Xposure are all pushing the boundaries, exploring innovative ways to incorporate AD within their work. Some of the bigger establishments could learn a lot from the smaller disability arts companies. It’s also a time to reflect on how bigger establishments can actively pass on lesson’s learnt to smaller venues.

National Theatre Live
The Threepenny Opera will be broadcast live to cinemas worldwide from Thursday 22 September, 2016. View dates for screenings by clicking on this link to the NT Live website.

Get the playtext from the National Theatre bookshop. 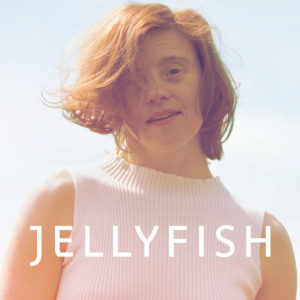 Following a sold-out run at the Bush Theatre last year, Sarah Gordy returns to play Kelly in 'Jellyfish' written by Ben Weatherill at the National Theatre from 5 -16 July. Natasha Sutton-Williams interviewed actor and playwright about the process of writing and performing this ground-breaking play. Jellyfish is a progressive and passionate illustration of a disabled ... 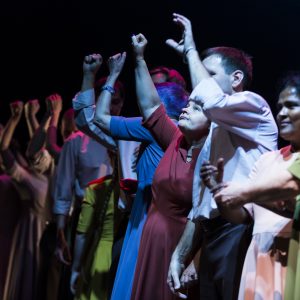 National Theatre recently collaborated on In Touch – a co-production between Russia’s Inclusion Theatre Company and Theatre of Nations in association with Graeae Theatre Company and supported through The British Council and Sense. Liz Porter went to catch the one-off sharing on Saturday 14 October in the Dorfman Theatre. The National Theatre are driving forwards to ... 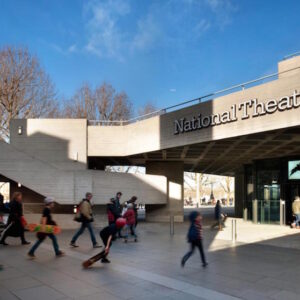 The National Theatre’s autumn press conference gave no indication as to the casting of disabled actors' for large productions in the theatre's 2018 program of work. Simon Startin concludes that the NT - the nation's theatre flagship - is taking ‘baby steps’ in its approach to inclusion. In the morning light of the October 2nd 2017, ...

Liz Porter’s companion for the afternoon Dolly McLoughlin also gave a considered response: The first half was good, but had I not known the play, or not listened to the excellent review by Colin Hambrook, http://disabilityarts.online/magazine/opinion/national-theatre-the-threepenny-opera/ I would still have been left in the dark. A lot was going on, lots of action, movement and sound. I need more description of facial expressions, the gestures of characters and, due to impaired hearing as well as blindness, constant reminders of names of characters, so I get the connection of interaction of actors and events on the stage. I only going to… Read more »