One Woman is a first person narrative film in which Cheryl Martin explores the aftermath of childhood sexual abuse. In the run up to an online screening at Cambridge Junction the award-winning writer and director talks to Colin Hambrook about her journey in bringing what was originally a stage show towards completion. 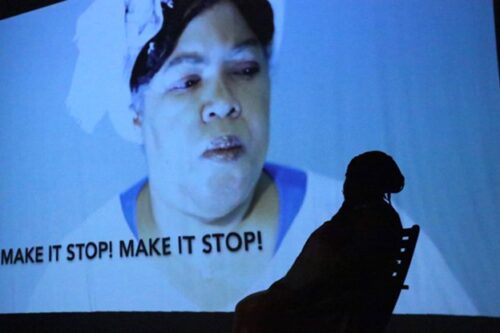 Originally commissioned by Made at HOME as a stage production One Woman won an Unlimited Wellcome Collection Partnership Award. The show is the third autobiographical piece of work in a series that takes the audience inside the mind of a survivor of abuse.

When the pandemic hit in March 2020, the research and development phase for One Woman had a few weeks still to go; however, the director Juliet Ellis has a track record as a filmmaker and the decision was swiftly made to adapt the work done to date, accordingly. The current film version of the piece is a hypnotic and at times surrealistic dreamscape that expands on footage originally intended to be projections in the stage show.

“Online digital is a medium in its own right, so to try and take the theatre show and film it just didn’t ring true. It was fortunate Juliet is proficient in using the visual language of film, so we took the themes and elements of the piece but created something entirely different.”

Cheryl talks about the dangers of creating work drawn from such deeply personal and traumatic experiences. Her first show Alaska was about what it was like growing up with severe depression and being suicidal from the age of eight years old.

“I wouldn’t believe it myself, except that I write everything down. So I started writing when I was about eight or nine and the depression really took off when I was about 17. And then it didn’t let up, ever.” 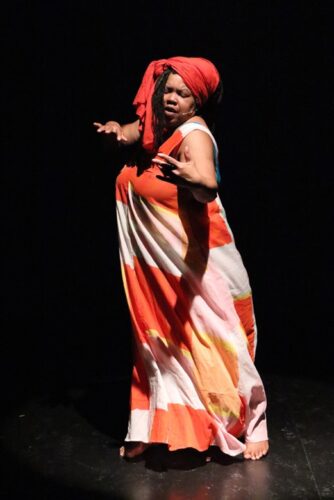 “So my big beats were HIV/AIDS, cancer and heart disease. But I added the mental health thing, because I wanted to see if they could do anything for me, because I was really ill. And I got on to this descriptive protocol; they were researching what is Borderline Personality Disorder, back in 1987.

And that’s when they gave me medicine that worked. But it was like an emotional cosh and they left me on it for 20 years. I crashed off it when I realised I couldn’t carry on like that, but then I went right back to the way I had been in my 20s.

I had forgotten how bad it was because I just pushed that out of my mind. So after I got back on decent medication, doing Alaska was me, going back to that, and looking at what it really was. And it’s very harsh. It’s also very funny, I mean, I dance and laugh and sing and stuff, but it’s also dark.

I still do Alaska. And in Alaska, I’m just sat down in a circle with the audience. And I always get these people, especially young women in their 20s, who come to me afterwards and sometimes whisper in my ear, that they’re just like me, but they haven’t told anybody. And they’ve never seen anybody talk about it.”

One Woman brings Cheryl’s story up to date. During intensive therapy for Borderline Personality Disorder, Cheryl realised that all the women in her therapy group had been sexually abused as children. Part of what’s wrong with traumatic memories is that they don’t degrade the way that memories do usually. They stay raw, festering in the unconscious.

Allowing these memories to come back to the surface is overwhelming. However, despite the dangers of dredging up such painful memories with the need to incorporate intensive specialist therapy into the writing and performing process, Cheryl has found time and again her audiences thanking her for breaking taboo, confronting stigma and for giving acknowledgement to hidden stories. Ultimately One Woman conveys an optimistic message that it is possible to come through incredible trauma. Even though it might take decades, there is still hope.

“I want to get One Woman out there because there are a lot of women like me, and when I was younger I didn’t have anybody. My family didn’t believe in mental health problems. I tried sending them all sorts of information and telling them what actually happened, but to this day some family members just don’t believe it. And that’s true of a lot of black and African Diaspora families. Part of me feels I have to stand up and say, yes, I had this turbulent, awful thing going on, but nevertheless, I survived it, and I’m here, and I’ve got a life and the life is now calming down, you know. You can get beyond it.”

Imagery connected with the ocean is a thread through One Woman. The sea represents sanctuary and is a metaphor for possibility. After all, the sea always exists in the same ratio to the sky. It begs the question: Are you defined by your experience of abuse or can you become the person you were meant to be, with limitless potential?

Cheryl went through two years of therapy, revisiting experiences she hadn’t willingly thought about since they happened. She often used the rehearsal room as a place to write, with the creative team on hand for support. But she finally feels after decades of suicidal depression, that thankfully her mental state is stabilising.

“Originally, the idea was that I would load the really heavy stuff into the binaural recordings, so that I didn’t have to perform it. I wanted to make it less overwhelming, although it turned out that it wasn’t so much a protection for me, because it still acts as a trigger. But for the R&D audience listening to the most traumatic parts of the story, the feedback was that they felt safer listening individually, leaving me to perform the more serene parts of the story, live.”

If and when it is possible to go back to the stage production Cheryl is looking forwards to working out possibilities for engaging an audience in new ways.

“We’re going to have to socially distance, but you can make that interesting. You can make that a part of what you’re doing in a way that’s organic and exciting. I’d like to experiment with the concept of immersive performance, where the audience is on the inside looking out towards the performance; where they’re surrounded by everything, the sound, the vision and the performers. And so that’s something that I want to try.”

Cheryl has plans to work further with Contact theatre in her home city of Manchester, following last years’ I Am Because We Are inspired by life stories of Black Africans living with HIV. Other projects on the backburner include writing a play about the Aztecs and a Faustian novel that will give a unique slant on trauma.

However, in the meantime following a screening in Brazil and a recent airing in the Southbank Centre Unlimited season the plan is to apply to screen One Woman in as many film festivals as possible, including a showing in Barcelona in June.