Joe Turnbull returns to Brighton Dome for the second session of Day 2 at the Oska Bright Film Festival to see if it could live up to the highs of the morning.

After the rollercoaster that was the morning session, I was certainly expecting big things for the evening event. There was a clear change in tone between the two sessions with the proliferation of shorter films making way for a small selection of longer pieces, culminating in a full-blown feature-length piece in Sons and Mothers.

Fran Estevez’s Idiotas (Fools) got things rolling with its fantastical storytelling, engaging characters and stunning scenery. It tells the story of a man and dog who are best friends – the dog is a particularly erudite talker. The duo come across a balloon, which the man over-zealously grabs, popping it amidst a blaze of pink rubber confetti and a distinctly human scream. The debris reveals a note inside which reads ‘deflate me little by little’.

Pretty soon, more brightly coloured balloons appear from the sky and upon following the note’s advice, the friends find they contain the voices of people from distant lands. The camera takes the audience on a mesmeric journey through the various stories – like messages in bottles washed ashore – but they are all overwhelming and tinged with anger.

This sense of bafflement was not at all helped by the mess that was the audio description. The tracks were jarringly overlaid and unsympathetically voiced in a way that didn’t fit the characters at all. The AD of the scenes frequently overlapped the reading of the subtitles. Technical difficulties notwithstanding, this was access at its worst, making the film very difficult to follow.

But the back and forth between man and dog just about held things together. The former plays the more enthusiastic, care-free but brash character, whilst amusingly the dog is the gruff and grumpy archetype of a cynical old man. Ultimately, the film speaks to the breakdown in communication that can so often happen in all of our day-to-day lives. The seemingly bitter vitriol of the messages and stories contained in the balloons perhaps alludes to frustration people feel when they are misunderstood. Despite its joyful exterior, Idiotas is a deep and poignant film, which treats its audience as anything but fools, expecting a lot of them.

Poster image for Sons and Mothers.

Following Idiotas was a talk delivered by co-filmmakers Michael Smith and Tom Stubbs, about their work in progress Dawn of the Dark Fox. An earlier animation auteured by Smith reveals how he is an ‘inside person’ who lives in the rich universe of his imagination more than he does the social world. The task for Stubbs, a community filmmaker, is to fashion a documentary about Smith’s brilliant fantasy world – populated by the mysterious Dark Fox – whilst also keeping it firmly rooted in reality.

Having filmmakers talk about a work in progress added a welcome extra texture to the evening’s proceedings and provided an illuminating insight. Smith and Stubbs’s playful rapport was a joy to behold, as each ribbed the other about their idiosyncrasies and the difficulties of working together. The feature-length final outcome will definitely be one to watch out for.

Rounding off Day 2 was the feature-length documentary Sons and Mothers. It catalogues the artistic and emotional journey of the award-winning theatre production of the same name, by acclaimed Australian disability theatre company, No Strings Attached. The production aims to get to the root of what is special in the mother-son relationship by delving into the personal experiences of seven hugely diverse but multi-talented individuals. What follows is a deeply moving portrait of some very complex relationships with plenty of tears and laughter along the way.

Sons and Mothers also offers a candid fly-on-the wall depiction of the creative process of putting together an award-winning piece of theatre from inception, to workshopping to finished piece. Like any creative project, it’s far from plain sailing and emotions frequently boil over. The tumultuous waves of feelings threaten to capsize the whole project. But the show must go on.

The film is beautifully shot and masterfully edited. But it feels very much like a ‘mainstream’ documentary of the type you’ve probably seen dozens of times before. More than any other film I saw on Day 2 at Oska Bright it felt like a film about learning-disabled people rather than by them. I think there can and should be room for this type of film at a festival like Oska Bright, provided it is in the minority and doesn’t overbear on the more disability-led elements of the programming. Overall, I think they got the balance right.

The evening session felt more refined, and more analogous to other, more established film festivals. But with that it lost some of the more rough-and-ready roguish charm of the earlier session. Oska Bright proved sometimes you can have it both ways, as the contrast was actually a welcome and pleasing one. On this evidence I can only see it going from strength to strength. 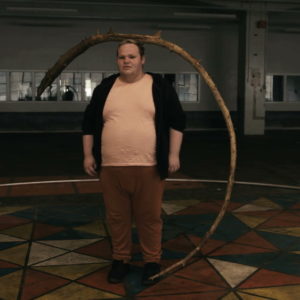