Owen Lowery has published two major collections, Otherwise Unchanged, (2012), and Rego Retold (2015). His latest project, Transitions, has had several outings including theatrical interpretations and a film.  He will be performing live alongside a screening of his Transitions film as part of ‘I’m Here Where Are You’ at Cambridge Junction on 27th April. Lowery talks to DAO about the development of the project, funded by Unlimited (delivered by Shape and Artsadmin). A still from the Transitions film.

The Transitions poems began with the intent to be more open; to write in a clearer and more accessible way, with a live audience in mind. Lowery wanted to further explore the theme of transitions both from a personal point of view, and from the wider perspectives of migration, disability, social change, and the natural world.

Transitions celebrates the extent to which the human spirit can overcome obstacles. It follows on from Lowery’s first poetry collection, Otherwise Unchanged, which charted the poet’s life following a serious sporting accident at the age of 18, which led to paralysis; learning to adapt and re-educate himself. But whereas he previously aimed to raise awareness of his poetry exploring an eclectic mixture of themes, approaches, forms, and subjects illustrating change, this time there is a more tightly-focused response to a central governing theme.

“Since there was a six-year interval between Otherwise Unchanged and Transitions it is inevitable that my poetry has developed, which has impacted on how I deal with the central theme. This time around the poems are less concerned with poetry, perhaps, and more concerned with communication. That is not to say that these poems ignore formal and structural elements, but they do pay closer attention to ensuring that the narrative emerges more readily from the formal framework of the poems.” Transitions confronts the theme head-on, whether change is explored in relation to the natural world, relationships, injury and hospitalisation, family and autobiographical history, human migration, or disability in general. Lowery points to his reasons for this development.

“I like this approach and have found it refreshing, as well as cathartic, in its honesty. I approached the project in a deliberately ordered manner, giving it a chronological structure with a sense of beginning, middle, and end. And the poems were written in that order too. For example, the series begins with a poem that considers the importance of breath to a poet on a ventilator, then includes poems that relate to my experiences of life before my injury, hospitalisation, and disability.”

“The closing poems of the Transitions series, on the other hand, reflect a sense of opening out, of increasing possibilities, as the narrative follows my move into the community, after hospitalisation, and focuses on the future for myself and my wife Jayne. This is a more rigid approach than I would usually adopt, but, in writing these poems, I had to be mindful of the need to create a sense of narrative, allowing for a cinematic and dramatic interpretation of the poems.”

Lowery found that working to such a definite structure presented a challenge of having to make each poem work both as an individual piece and as part of a unifying theme. He elaborates on the relationship between transitions within his personal life in contrast with the natural world – and his attempts within the poetry to capture change and the extent to which as human beings we are inseparable from what happens around us.

“I find it difficult not to think in terms of certain moments that have been important to myself and Jayne, including encounters with particular environments, or locations. One incident that springs to mind, occurred when we were holidaying near Loch Sunart. Despite heavy rain, much of it going sideways, we decided to head out together for a drive regardless and encountered an otter at the side of the loch. He was perched on a rock and eating a fish and it felt quite miraculous, a blessing out of the blue, a blast of beauty that opened us up to a whole other world. On another occasion, we visited Loch Lomond and were privy to seeing the loch dancing with sunshine, as were the snowcapped mountains in the distance. We were treated to a transformation, revived by the transition around us. We became a reflection of what we found, an echo of a deeper, fluid sound.” And so the Transitions poems are a point at which the personal, and the universal, coincide, with this being reflected in the relationship between the poet, the performer, and the audience, or readership. The Transitions poems reflect the psychological relationship between humanity and nature, particularly climate change, and our attitudes towards the impact that we have on nature, as well as the impact that nature has on us.

“When writing these poems, I was conscious, for example, of the geological processes that create rocks, minerals, and topography, the manner in which colossal change, such as volcanic and glacial activity, eventually leads to relative stasis. Clearly, there is a parallel with my own injury and paralysis, following intense sporting activity.”

Transitions exists, not only as a poetry project, but also as a 32-minute film, made in collaboration with LA Productions. From the outset, Lowery intended Transitions to be a multi-media experience, based on the poems on which the idea was first developed. The intention was and is for the poems to reach an audience of people who are not necessarily poetry readers, and so increasing interest in the poems and raising awareness of the themes within the work.

Lowery goes on to describe the move from poetry towards creating theatre and film:

“I am used to working with live audiences as a performer, and as a sportsman in my judo days, but those experiences were largely as an individual, whereas the theatrical production of Transitions, and the Transitions film, were made in collaboration. Working in this way, involves surrendering the poems, to some extent, and allowing them to become flexible and adaptable, subject to the ideas of others. This is not always an easy thing to do, but it is absolutely necessary for the project to succeed and reach its full potential. It is certainly a way of working that I will be exploring further in the future.”

Owen Lowery will be performing some of the Transitions poems alongside a screening of the film at Cambridge Junction as part of I’m Here Where Are You on 27 April, and again at Delapre Abbey, Northampton 11 May.

Lowery will be performing poems from Otherwise Unchanged at Big Lit, Galloway on 3 May, followed by a performance at Hastings Litfest on 31 August. 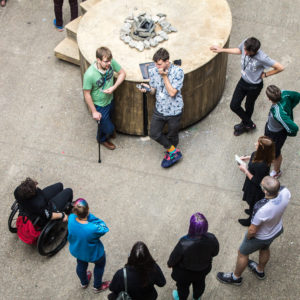 New disability arts festival ‘I’m Here, Where Are You?’ comes to Cambridge Junction

I'm Here, Where Are You is a brand new festival showcasing disabled talent across artforms coming to Cambridge Junction 27-28 April. The packed programme will include theatre, comedy, dance and visual art and promises a raft of accessible performances. Disability Arts Online spoke to festival programmers Liz Counsell and Linda Rocco as they make final preparations for ... 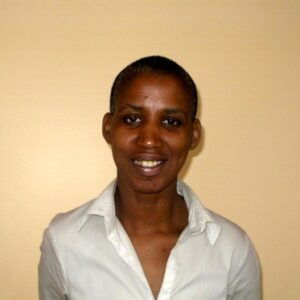 Introduced by DaDaFest’s resident poet Roger Cliffe-Thompson, the poetry of Young DaDaFest poets rang out alongside Allan Sutherland reading a selection from Proud and the award-winning Owen Lowery with his multi-media presentation of Otherwise Unchanged. Review by Deborah Caulfield. The first half of this event included poems by local disabled people… 'I come to say what ...