On 13 March Manchester International Film Festival presented the premier of the documentary Paperman, following the process of James Lake’s commission to build a large scale sculpture for the Lucca Biennale. Review by James Zatka-Haas 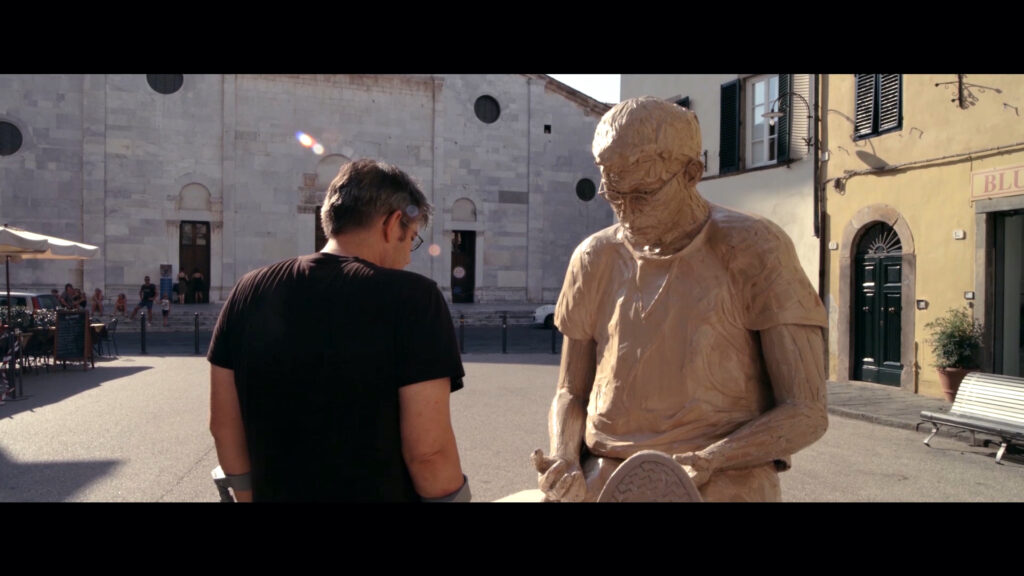 Sculptor James Lake’s artistic life, for all its trials, is ripe for a certain kind of storytelling. I don’t mean to be trivial, but for the casual observer it is the quintessential story of the undiscovered artist, and is a narrative filmmaker Domenico Zazzara, with some success, has chosen to portray in his documentary Paperman.

The film follows James as he sets out for a month-long residency at the 2018 Lucca Biennale, a city-wide arts event for artists who use paper as their primary medium. The first half is engaged in, as many documentaries of this kind are engaged in, to painting a biographical picture of his early life. Using a mixture of family photos and interviews with his mother, his partner and son, a snapshot emerges of a sporty teenager whose life was dramatically changed when he lost a leg to cancer, and how that event, whose magnitude no film could ever convey, made James into the artist he is today. The film then finds him, older now, working alone in the confines of a suburban garage; picking away tirelessly at cardboard, creating with a kind of reverential duty towards it, the personal meaning behind this history.

From the garage he travels to Italy. He is one of several artists occupying a vast empty hall in which over the course of 4 weeks, along with a team of skilled assistants including his son, he will create ‘Paperman’, a monumental self-portrait. Cardboard, we learn, is an interesting material both for its physical and philosophical properties. It is innocuous; often overlooked, and is difficult to manipulate, being more rigid and harder to work with than other kinds of paper. In building ‘Paperman’ (and in his other works), James takes on these qualities as a guiding frame, working with them in a slow methodical fashion to bring about their full potential. His slow rendering of the cardboard works a kind of humanity back into it, and the effects are astounding. 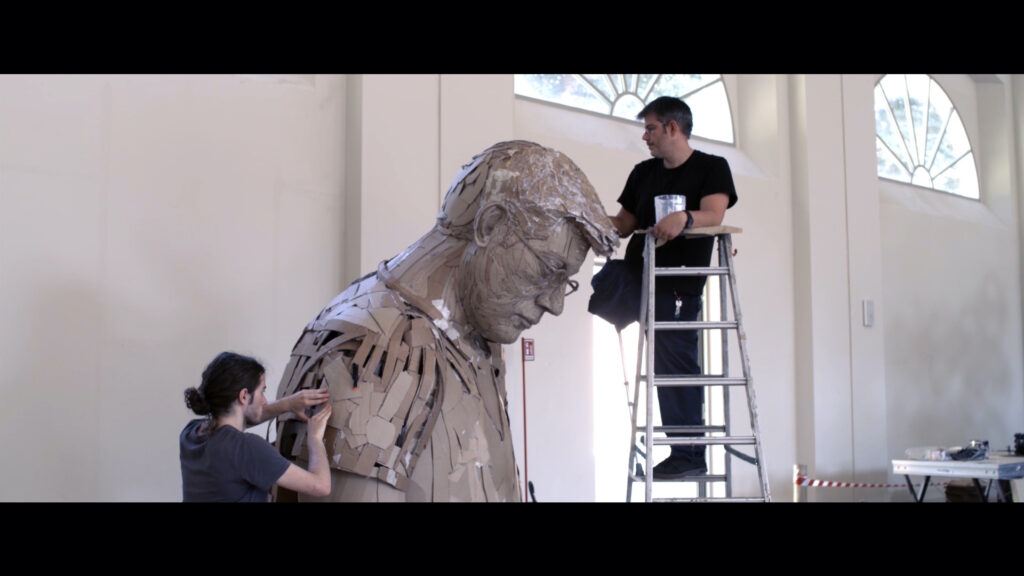 James’s sculptures could be read as totems towards the difficulty of the material they’re made from, yet those qualities may also serve another purpose, one significant to this particular artist’s biography and indeed many others. Cardboard, like the sculptor who uses it, is – with all due respect – largely ignored. Cardboard sits disused (I can see a pile in front of me) and artistically is seemingly worthless, but put to proper use, or seen in the right kind of way, it opens itself up to a new kind of potential. The analogy is a strange kind of sentiment, but one that’s not altogether unfaithful or insulting to James’s perseverance. It stands up as evidence for the artists’ spiritual fortitude on the one hand and the infinite potential of his chosen material on the other. One might also apply this analogy to disability in general, but that may be too much of a rabbit hole to go down for the purposes of this review.

It seems apt that the familiar suburban garage – also ubiquitous, overlooked – is the place where he sits, year after year, creating art out of the seemingly mundane. There’s an odd significance here, too, one not immediately felt, in that the garage has something ‘cardboard’ about it as well.

In the sculpture ‘Paperman’, James is seated on the floor with his leg stretched out in front of him, manipulating a piece of cardboard in his hands. Surrounding him are his various tools, and materials. His face centres on a powerful stare, monomaniacally focused on the task at hand. It’s a characteristic of James’s work that the face, which he works on independently, houses the work’s magnetic pull. The faces are the beacons from which you navigate, and for that reason are intricately worked out; a standout moment sees him tear his eye out from the socket with some force, fiddle with it a little, then shove it back in, so that it looks the right way. 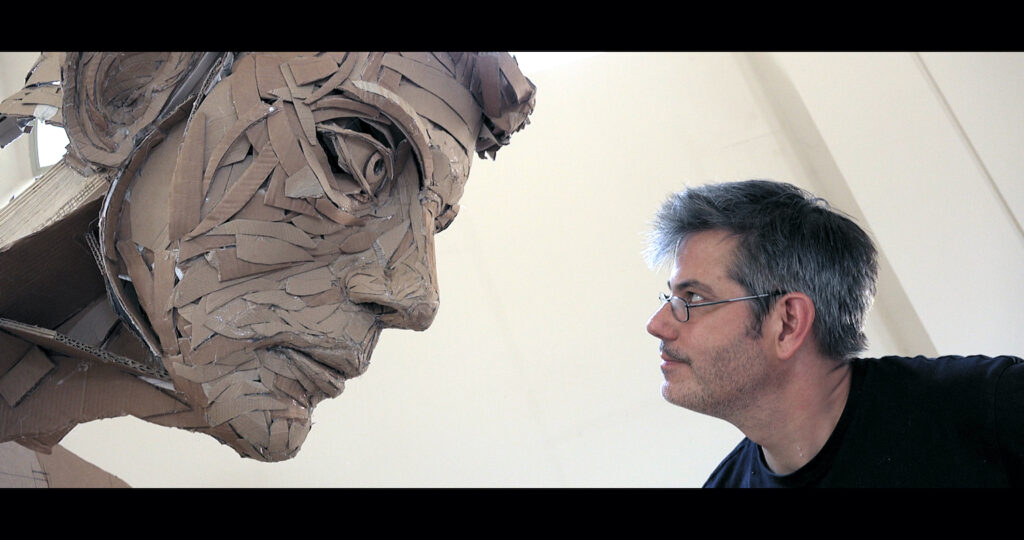 The more you stare at these faces with all their lines and complexities, the more you find something universal in them. Like with his beloved classic sculpture ‘Sitting Without Purpose’ – a portrait of his father, there’s a deep and moving empathy towards our own fragile mortality in James’s art. I don’t know a time in history where that could mean as much as it does now; in the thaws of Covid and an environmental collapse. How much comfort you take from this is really up to you, but whilst we are all locked up in our rooms, resigned to a kind of cardboard fate, seeing these faces may at least be sobering.

Zazzara’s film sits comfortably in that well-travelled genre which takes The Life of The Artist as its central thesis. Whilst there are times when Paperman slightly jars, jumping between the past and present and even various aspect ratios without any obvious rationale, (at times it felt like the streaming service hadn’t quite made up their mind up over how to best watch a film intended for the cinema on a tiny laptop screen; or – more likely – it could have been to do with my milkfloat internet connection), overall the film exceeds in what it set out to do, exposing an immensely talented sculptor who is working at the height of his powers, whilst making a bold statement about the reality of the undiscovered disabled artist. In a kind of unconscious way, the film is as much about the properties of cardboard as it is about James himself, and  for a man who’s found the solution to the ubiquitous Amazon delivery package, maybe he would be happy with that?

You can follow James Lake on his Disability Arts Online blog or see more of his work via the artists’ website.