From The Crowd was a piece of immersive theatre performed last Friday, recalling the pro-democracy gathering in St Peter’s Field, Manchester on 16th August 1819. Brian Hilton was there amongst a crowd of 3.000 commemorating the 200th anniversary of the Peterloo Massacre. 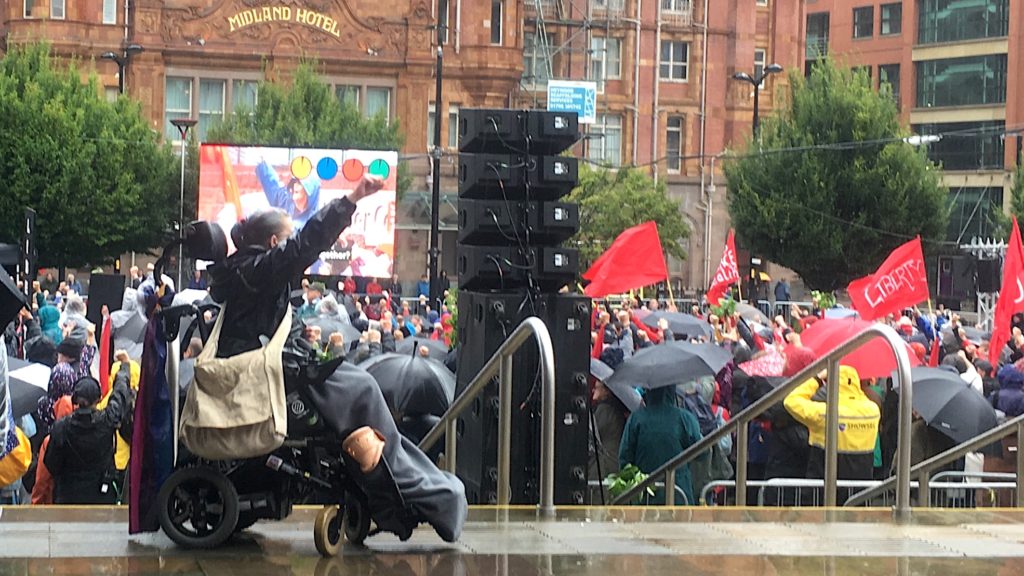 Dennis Queen salutes during ‘From the Crowd’ commemorating the Peterloo Massacre of 1819. Photo by Brian Hilton

‘From The Crowd’ was performed thrice in a rain-soaked Manchester.

It chucked it down and we were collectively soaked through to our knickers and socks. However, rather than dampening the spirits of the performers and audiences alike, the rain brought us together like a giant umbrella of unity and defiance!

‘From the Crowd’ was an outdoor performance extravaganza. Part street theatre, part oration, it consisted of a huge cast of performers, musicians, laurels and a haunting choir. They all perfectly knitted together to remember the victims, as well as addressing some of the inequities and struggles that still exist in Manchester and in the UK today.

For those not familiar with the events of Peterloo, the show and the subsequent reading of the names recounted the 18 killed and the hundreds of men, women and children maimed and scattered by the sabres and guns of our own government forces in 1819. Other issues addressed included the homelessness crisis in Manchester, the commercialisation of Manchester Pride and the treatment of refugees in detention centres.

From the Crowd. Photo by Brian Hilton

An entire section was dedicated to how D/deaf and Disabled People have been, and continue to be, excluded, epitomised by Jeremy Deller’s newly commissioned and totally inaccessible memorial to Peterloo. But it also acknowledged how we took to the streets to ensure that our voices were heard in past campaigns.

Performer Ali Briggs recounted how Deaf People protested in Manchester in 2001, demanding state recognition of British Sign Language, and went on to teach the audience to sign, ‘People Power’ in BSL. Seeing hundreds signing ‘people power’ with their clenched fists raised in the air was truly something to behold.

Mark Todd was another performer to speak of Disabled People’s collective action, addressing the stepped monument as “this vile memorial”. This utterance was greeted by whoops, cheers and spontaneous applause from various sections of the audience.

Thanks and credit must go to Director, Evie Manning who delivered a visual treat that made our hearts swell with pride and break in heartache within beats of each other. Evie also demonstrated how to be a true ally of disabled people.

When Evie heard about a campaign being led by local disabled people working to force the council to both address and rectify the lack of access to the memorial, she joined the very first protest. She even offered to withdraw from the project in solidarity. When the campaign said that would not be necessary Evie invited the campaign to contribute to the script, the results of which were evident throughout the performance.

Indeed, members of the campaign went on to be performers and were pleased, if not a little surprised to report, that no censorship was imposed on what could and couldn’t be said within the show. 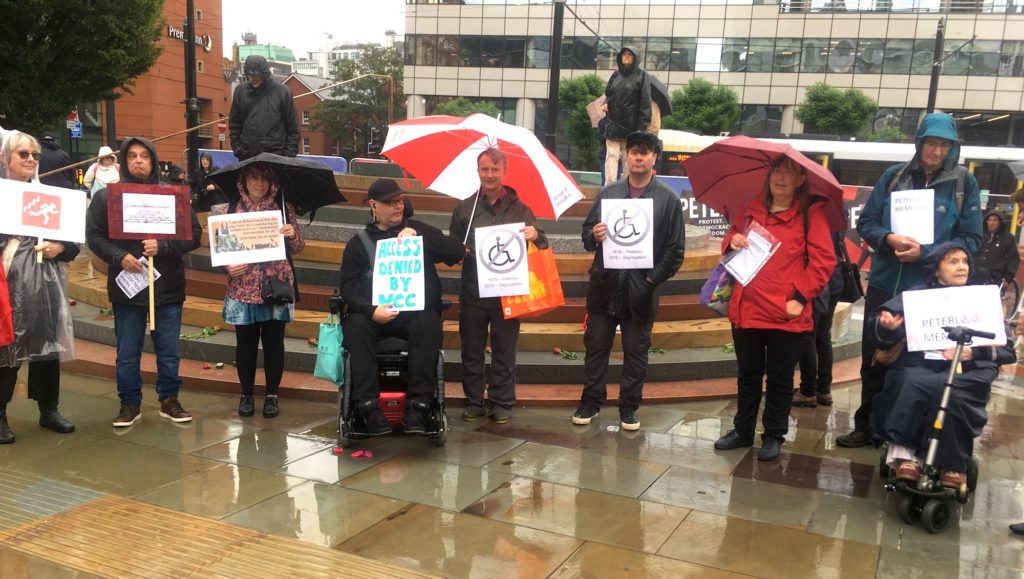 The resulting performance and commemorations have rightly attracted national coverage in both TV news outlets and print media. After the performance, Oscar-winning director Danny Boyle, who was in the crowd, was asked what he thought of the performance and criticism of the council for commissioning an inaccessible memorial. Quite rightly Mr Boyle described the show as “beautiful” and called on Manchester City Council to correct the “mistakes” made over the commissioning and construction of the memorial.