In a series of four pieces, writer and critic Sandra Alland examines the state of disabled and D/deaf arts criticism, with input from various artists and experts. Last month, Alland used her experiences as co-editor of Stairs and Whispers: D/deaf and Disabled Poets Write Back (Nine Arches, 2017) as a case study of reviews of ‘identity-based’ artworks. Today, she discusses reviews of D/deaf content, with BSL commentary from deaf writer and performer, Bea Webster.

Since I’m a hearing crip, I suggest you check out the deaf perspective in the following video before reading (or listening to) me. I’m also hoping Bea Webster’s humourous take on criticism of D/deaf artworks will balance out my grim statistics from Stairs and Whispers: D/deaf and Disabled Poets Write Back (co-edited by me, Khairani Barokka and Daniel Sluman). Besides being insightful, Webster is one hilarious human.

[Bea Webster, in British Sign Language with English captions. Click ‘CC’ to turn the captions on. Transcript at video link.]

Version with voice over.

Out of 54 poets in Stairs and Whispers, seven are D/deaf. This constitutes 13% of contributors – one of the highest community representations in the book. Two poets contribute text-based poetry, both of them offering separate audio performances of the poems (and one also contributing an essay in print and audio). Another writer complements a text-based poem with full-colour pages of VisPo (visual poetry). Four poets perform in videos using BSL (British Sign Language), mixed with or translated into on-screen English text (and in one case, Shetlandic). Several film-poems offer separate audio performances by poets or translators, distinct from voice-overs included for access as part of the films.

D/deaf people account for the largest variety of languages and media in the anthology, covering an impressive range of poetic genres and styles. Yet, 75% of mentions in newspapers, journals, blogs and vlogs made minimal or no commentary about them. Some of these reviews comprised thousands of words, and some of the erasure came from disabled reviewers. Ten reviews out of 28, or 37%, had no D/deaf content at all.

Some D/deaf people consider themselves disabled; many frame societal barriers as the problem, as opposed to bodily ‘lacks’ (as per the Social Model of Disability). A lesser-known fact is that some D/deaf people don’t use the word ‘disability’. Instead, their focus is on the uniqueness of Deaf culture, which features a rich history, artistic movements, and a strong connection to sign languages. Stairs and Whispers‘ title, introductions, essays and glossary specifically highlight the variety in D/deaf poetics, politics and communities. Yet, reviews of the book almost always mentioned contributors as if being D/deaf or disabled can only be framed as an individual and physical ‘limitation’ – ignoring both the Social Model and Deaf culture.

‘Tin Eaters #7’ by Aaron Williamson, from Stairs and Whispers: D/deaf and Disabled Poets Write Back. Image courtesy of Kendall College of Art and Design of Ferris State University, for ‘Art of the Lived Experiment’ Bluecoat tour.

This stance towards D/deaf artworks echoes what I wrote last month. The anthology explicitly discusses social and radical models of disability, D/deaf culture and neurodivergence. However, most reviewers’ perspectives were clearly informed by the medical model, i.e., the ‘what’s wrong with you’ model. This failure to engage with the ethos of the book led to simplification or erasure of D/deaf and disabled narratives. It also resulted in a lack of specificity in critics’ analyses of work by Deaf, deafened and hard of hearing contributors.

For example, Aaron Williamson’s stunning visual poetry constituted one of the book’s most unique (and unmissable) additions. However, critics noted them only twice, with a total of 46 words. The poems aren’t immediately identifiable as being ‘about a disability’, so it seems reviewers searching to highlight individual ‘suffering’ (a word used in several reviews) therefore passed them over. Williamson notes at the back of Stairs and Whispers how his series, ‘Tin Eaters’, relates to his experience of tinnitus, and he mentions coining the term, ‘Deaf Gain’. Reviewers didn’t seem to notice Williamson is deaf, but ironically he’s one of the few poets in the book who directly addresses formal considerations of an identity-informed arts practice.

Reviewers discussed Raymond Antrobus‘s text-based poems and essay the most of any D/deaf content, with text-based poems by Lisa Kelly mentioned second-most. Though both writers’ excellent work certainly deserves attention, it’s clear the same barriers and prejudices of the wider world also play out in reviews. There’s the snobbish viewpoint that poetry on the page is more respectable than poetry in performance. There’s the ableist/audist/classist belief that those who read, write and speak are more worthy of study. And there’s the sad truth that most hearing people don’t recognise sign languages as actual languages.

Yet, audism and ableism were also present in some of the praise aimed at text-based poets. They were said to have turned their disability into ‘an advantage’. And the critic went further: ‘The ability to do this is a small compensation for the loss of hearing.’

[‘The Stars are the Map’, video as it appears in Stairs and Whispers: D/deaf and Disabled Poets Write Back. British Sign Language poetry (extracted from a longer poem) by Gary Austin Quinn. English and Shetlandic poetry by Christine de Luca. Concept by Kyra Pollitt.]

As I searched through reviews of D/deaf poets, I noticed another pattern of erasure: reviewers tended to anonymise or poorly cite BSL poetry. ‘Long Lost Lover’, Bea Webster’s poem filmed by Ania Urbanowska and myself, was the sole work reviewed by one critic; however, he failed to note Webster, the filmmakers, or the poem’s title. There was only one accurate mention (out of three) of Gary Austin Quinn’s film-poem, ‘The Stars are the Map’, a collaboration with translator/artist Kyra Pollitt and translator/poet Christine De Luca. One critic cited an incorrect name and title; another omitted Quinn’s name entirely.

Donna Williams’s writing and performance in our film of her poem, ‘Bilingual Poet’s Dilemma’, was mentioned once by title – but Williams’s name was not cited. In another review, Alison Smith‘s name was noted in an 18-word blip about sign language, but the critic described the photo in the book – instead of addressing the film-poem it links to.

BSL poetry, even when highlighted, received almost no actual criticism. Most critics incorrectly described the film-poems as part of disabled access (something you can watch or listen to if you don’t read), rather than works of art in a different language, genre and medium. Translation was only mentioned once; this absence further detracted from BSL’s status as a language.

Two reviews of Quinn’s poem were wonderfully descriptive, really letting us know what the poem was doing and why the reviewer thought this was ‘good’ (see last month for my whinge about the lack of judgements and examples in most reviews). I’m overjoyed some critics finally engaged, but my research suggests the two reviewers are hearing people not fluent in BSL – and their commentary focused on the excellence of Quinn’s BSL performance. Without understanding the language, can a person know if a BSL poem is powerful or if, as one critic put it, ‘BSL will never be the same’?

Sign languages have specific meanings; they aren’t blank slates waiting for artistic interpretation. Bea Webster questions hearing people’s assumptions about ‘beauty’ in her video above, emphasising the importance of acknowledging BSL as a language instead of something akin to abstract dance. I suggest you go watch her again. She’s on-point while also being funny, and I can’t think of another way to summarise this topic that isn’t a downer. Let’s do better, people.

Bea Webster is a mixed-race queer woman with a cochlear implant, living in Glasgow. She’s a recent graduate of the BA Performance in British Sign Language and English at the Royal Conservatoire of Scotland (RCS). Hot off the success of Mother Courage in Leeds with Red Ladder Theatre, she’ll play Alfa in Peeling by Kaite O’Reilly, on tour in Wales with Taking Flight Theatre Company in March 2019.

Watch all videos from Stairs and Whispers here.

Sandra Alland is back next month with interviews of disabled and D/deaf artists working in various media, about their experiences of being reviewed. 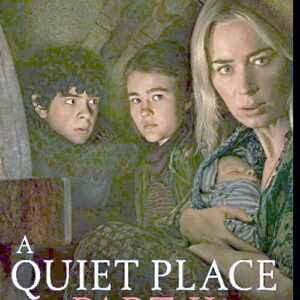 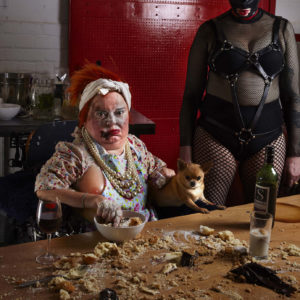 ‘Quality’ and the marginalised artist part 4: reframing the conversation

In a series of four pieces, writer and critic Sandra Alland examines the state of disabled and D/deaf arts criticism, with input from artists and experts. The series has included statistics of reviews of marginalised artists, a case-study of reactions to an 'identity-based' publication, and suggestions for reviewing D/deaf artworks (with BSL commentary from Bea ... 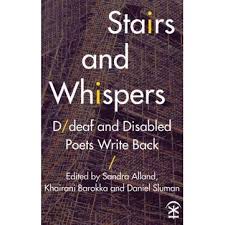 ‘Quality’ and the marginalised artist part 2: reviews of ‘identity-based’ works

In a series of four pieces, writer and critic Sandra Alland examines the state of disabled and D/deaf arts criticism, with input from various artists and experts. Last month, Alland dissected what's happening for marginalised people in publishing. Today, she uses her experiences as co-editor of Stairs and Whispers: D/deaf and Disabled Poets Write Back ...