Internationally-acclaimed performer Ramesh Meyyappan enjoyed sell-out performances around the world for his most recent show, Butterfly. Whether or not Off-Kilter will receive the same acclaim remains to be seen, but there is much to relish in this darkly comedic and beautifully physical work of theatre, a production, which skillfully incorporates a range of ‘magic tricks’ to tell the story of one man’s psychological disintegration and his eventual recovery and salvation.

Meyyappan plays Joe Kilter, a man who has his own, somewhat obsessively maintained routine in life; at the start we’re succinctly shown how he has a place for everything and, as he returns home from some unidentified workplace, a sufficiently strict routine to ensure that everything is put in its place — whether that’s the office badge and lanyard in his jacket’s inside pocket, his tie on a hook, his keys in a recycled tin can on a shelf, or his shoes positioned perpendicular to the shelf unit.

We’re also clearly shown he has little life outside of his work; he sits at his table, drumming his fingers, falling asleep but wakening up again, as the hands on the clock behind him spin through the night. When his alarm clock goes off, we see the first contribution by illusions consultant Kevin McMahon, as Meyyappan discovers a growing number of vibrating alarm clocks in various pockets and parts of his person. This sequence is played for laughs; a necessary moment of lightness before events take a turn to the dark.

For, as Meyyappan essentially reverses his actions from the ‘previous night’, heading off to work once more, a brown envelope is lowered from the ceiling onto the table; it comes with an ominous import which Meyyappan as Kilter does his best to ignore despite knowing it’s there. When Meyyappan eventually opens the envelope, this is the signal for the audience to do the same with the brown envelopes we found on our seats. The folded sheet inside doubles as the show’s programme, but it is primarily a copy of a letter from Kilter’s employer (well, some low-level ‘Assistant Personnel Manager’) informing him that his “services are no longer required” with immediate effect.

This is arguably the show’s one slight stumble, as the act of opening the envelopes and reading the letter does momentarily distract us from Meyyappen on stage; then again, perhaps that’s the point—the letter is a disruption of our role as audience just as much as Kilter’s role as employee. In any case, Meyyappen soon regains our attention.

The body of this show is a finely judged expression of Joe Kilter’s fragility, and the process of grief — shock, doubt, anger, acceptance and recovery he goes through, with magical illusions and finely controlled gestures used to brilliant narrative effect.

It’s fair to say that Joel Nah’s soundtrack — a mix of noise, silence and discernible vibration helps express the character’s inner turmoil, but Off-Kilter is first, and foremost, a theatrical feast for the eyes.

—
Off Kilter
will go to Theatre Works in Singapore from 11-14 October with more dates being planned for a tour of the UK this autumn. 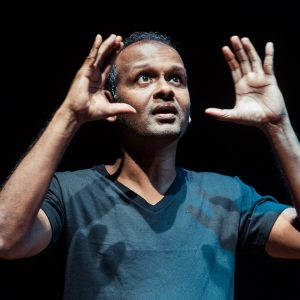 Kaite O’Reilly And Suddenly I Disappear: The Singapore/UK ‘d’ Monologues

‘And Suddenly I Disappear: The Singapore/UK ‘d’ Monologues’ written by Kaite O’Reilly is the result of a collaboration between teams of Deaf and disabled practitioners from both the UK and Singapore, funded by Unlimited (delivered by Shape and Artsadmin). It played Southbank Centre 5 and 6 September as part of Unlimited Festival. Review by Joe ... 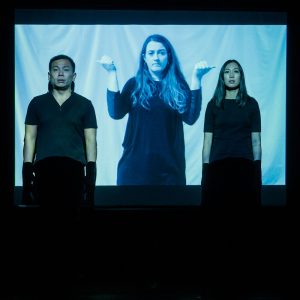 ‘And Suddenly I Disappear: The Singapore/UK ‘d’ Monologues’ is an international theatrical dialogue of difference, disability, and what it is to be human, from opposite sides of the world, written by award-winning playwright Kaite O’Reilly and commissioned by Unlimited (delivered by Shape and Artsadmin). As the show prepares to embark on a four-date UK tour, ...