An exhibition which highlights a little-known faction of the disabled people’s movement challenges assumptions and examines the tactics disabled activists use to fight back. Gill Crawshaw finds out what drives disabled people to take extreme action.

I was intrigued to read about Justin Edgar’s exhibition in his interview with Disability Arts Online last month. Reasonable Adjustment – The Disabled Armed Resistance Movement brings together archive material and artefacts which reveal the story of a radical group of disabled freedom fighters, Reasonable Adjustment, or RAD for short. RAD was active from the late 1980s to early 1990s. 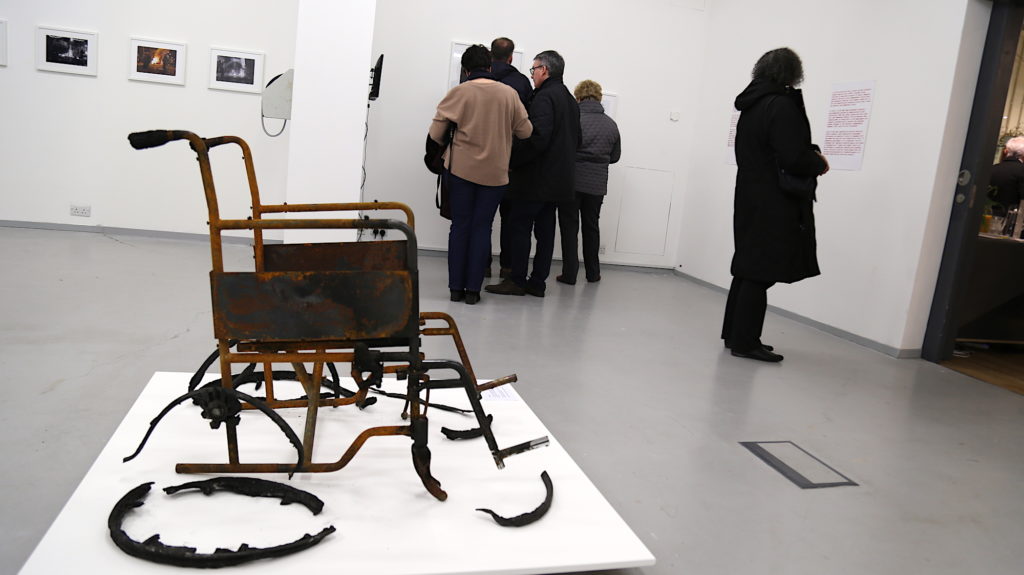 This is a gripping exhibition, but it’s not for the faint-hearted. Many of the exhibits are shocking and extreme. If you hadn’t fully absorbed the title of the exhibition, a replica AK47 rifle on the far wall might focus your attention. In the middle of the gallery are the burnt remains of a wheelchair, the result of a fatal accident with a home-made petrol bomb. A series of photographs captures this tragic event, when RAD activist Dave McCauley, a wheelchair user, dropped a Molotov cocktail. Clearly, news photographer Phil Dexter’s incredible images are dramatic and some people will find them upsetting. It’s hard to make sense of what we’re being shown.

Amongst an impressive collection of news cuttings, flyers, posters and objects, the outstanding item in the exhibition is a World in Action television documentary from 1991. It opens with a RAD member warning of a bomb being placed at Euston Station, then cuts to a clip of Margaret Thatcher condemning terrorist violence. The programme contains rare interviews with RAD activists (one with his voice replaced by an actor!) who are articulate and clear in justifying their tactics of criminal damage, arson and violence:

“Mrs Thatcher and her right-wing government have left us no alternative but to take up arms.”

These views are put in context and given credibility by a university lecturer who describes the social model of disability, which RAD advocates: “not an extremist philosophy”. We are reminded of what we were up against in the 90s during the programme’s advert break, with Jimmy Savile promoting Intercity trains.

Interestingly, this documentary is the only exhibit that comes with a warning, in case some of the “outdated language” used to describe disabled people causes offence. I talked to two women who I’d overheard gasping as they watched the programme. They told me they worked in care services and that they’d been horrified by some of the language they’d just heard. We discussed the rest of the programme and the exhibition and, while they definitely didn’t condone RAD’s violence, they could understand why disabled people might be driven to it. They acknowledged that violent acts can lead to positive outcomes. They saw RAD as an example of “people power”. 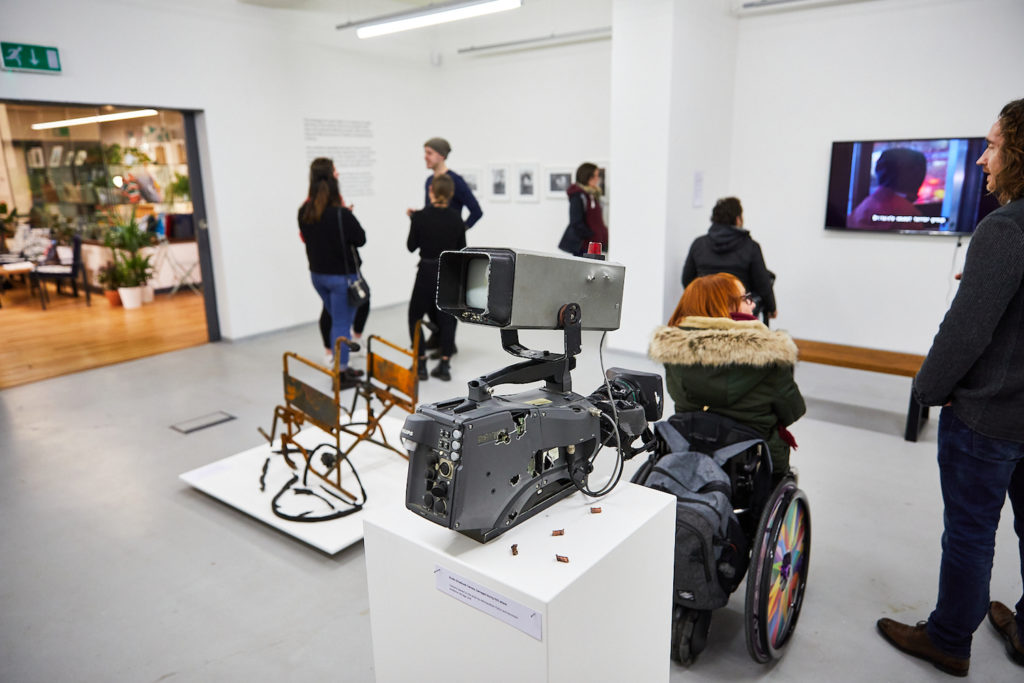 I hadn’t expected to hear such sympathetic views. I chatted to other visitors, disabled and non-disabled people, to gather more impressions of the exhibition. Nobody I spoke to had heard of Reasonable Adjustment before, the name didn’t mean anything to them. The exhibition was therefore a revelation and an insight into not just RAD’s activities, but also to the political climate that led to them. And, like the two women I spoke to first, people could relate to RAD’s anger and actions, to an extent – so long as they didn’t lead to casualties or serious damage to property.

Several people immediately made the link with a story currently in the news, that of Errol Graham, who died of starvation in 2018 after the Department for Work and Pensions (DWP) stopped his benefits. Graham, who had a history of mental health problems, is yet another victim of government policy and the actions of the DWP. People I spoke to were angry at the thousands of needless deaths as a result of benefit cuts, which some described as the real violence. Its scale and severity far eclipses anything carried out by RAD or other more recent activist groups.

As if in tune with these thoughts, Edgar gives space in the exhibition to some of the recent struggles of disabled people. Footage from Bolivia in 2016 of disabled people’s protests demanding increased state benefits and equal rights shows the police’s aggressive response, using tear gas and water cannon.

News coverage from UK television gives another chance to watch DPAC (Disabled People Against Cuts) storming parliament in 2015. Again, what’s striking is the police’s brutal handling of the situation. Succinct supporting text brings the history of disabled people’s protest, on the streets and online, up to date. 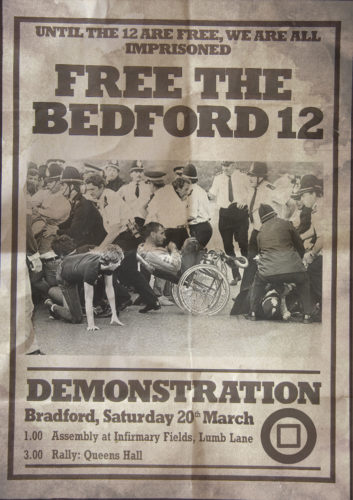 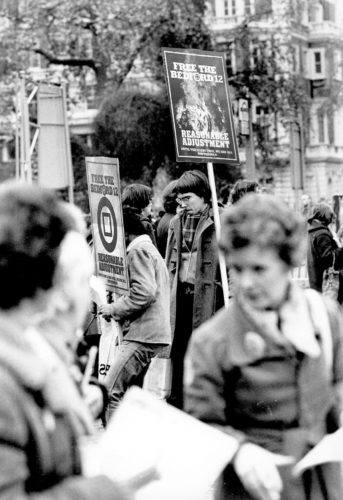 I wondered why DAN, the Disabled People’s Direct Action Network, was missing from this part of the exhibition. While DAN was committed to non-violent civil disobedience, there are some similarities with RAD, and they were operating at the same time. Edgar explained that, apart from a couple of sneaky clips, he had been unable to show a documentary about DAN because the BBC wouldn’t give permission. A panel discussion during the exhibition’s Wakefield run will be an opportunity to learn more about DAN.

This is a fascinating exhibition, as fascinating for the discussions and questions it raises as for its content. The installation invites people to think about whether armed resistance and other forms of action are ever justified, and what might drive people to carry them out. It might even inspire more activism. Radical acts, not necessarily along the lines of RAD, but certainly daring and confrontational, are still needed. The gains that the disabled people’s movement has achieved have been relentlessly eroded. It’s as if Reasonable Adjustment never happened.

Reasonable Adjustment – The Disabled Armed Resistance Movement is at The Art House in Wakefield from 29 January to 7 March. The exhibition will tour to the Attenborough Arts Centre in Leicester and the Worcester Arts Workshop, later in 2020.

Wait…but was RAD actually a thing? Wikipedia says it’s made up…

It never really existed, in this interview the artist admits he made it all up – https://www.youtube.com/watch?t=953&v=ef7A4k_dNG0