Born in Bowral, Australia Richard J. Bell has lived in rural New South Wales most of his life. He has tried his hand at many artforms in a bid to support recovery from mental illness, sharing much of his creative output via his website. DAO talked to the artist about the inspiration behind his creative work. I thought neologism was a cool word. It kind of described what I was doing. The word neologism means a new word or a phrase and also doubles as a symptom of schizophrenia considered to be a thought disorder where the person makes up their own words. It grabbed my imagination as a positive attribution and I coupled with ‘media’ because I experiment with art forms other than poetry, and ink because I still use pen and paper.

I began writing seriously at first, as a way of counteracting clinical depression. I was laying in bed for most of the day and I found that writing poetry gave me a sense of achievement. It was a way of building on small accomplishments and gave me the motivation to get out of bed and generally begin to look after myself better.

I had some support with the writing through a friend but at first it was just me doing something that felt right. Writing about lived experience of mental illness has helped me get through and to grow as a person.

I write so that other people can read and relate to what I experience because people have similar issues and the feedback I get is that by reading my website people feel that they are not alone. One in five of us struggle with a mental illness at some time in our lives – yet coupled with the stigma and media representation it can be a very isolating experience and can feel as if no-one else can understand what it’s like to live with a mental illness.

My first poem was published in the 2007 Annual Poetry Journal created by the Schizophrenia Fellowship of New South Wales Inc. From that point I discovered Vibewire.org, Poetry Space and a mental health magazine called Conexoz created for and by people with lived experience of mental illness, which all became outlets for my writing.

In 2012 I was published in Verity La and Wollondilly Ink – an anthology of the Wollondilly Branch of the Fellowship of Australian Writers.

From that point one of my goals became to write a book. It took me seven years in all to write the Gospel of Schizophrenia, but it was finally published by CreateSpace in 2015. I’d had enough work published to enable me to obtain a grant from Accessible Arts for a mentor to help me copy-edit the book.

The idea behind A Gospel of Schizophrenia was to take the reader on a journey from un-wellness to wellness – it’s a story about gaining independence. I moved to Mount Gambier in South Australia and was working in the vineyards. My medication was being chopped and changed at the time – so it wasn’t easy – working 30 hours per week and taking days off to go to the hospital to see the mental health team.

To me on the inside everything is to do with independence and freedom. Everything seemed to be working well down there – so I wrote about the journey about going to South Australia and searching for acceptance.

I write about some of the people I met who were important to me. I gave them pseudonyms to give them anonymity. The ‘Rock Chick’ was the first person to say “hey you’re sick” and without that I would never have gone to see the doctor. The ‘Lady of the Night’ meant a lot to me, because she was the first person outside the team of mental health professionals to understand what I was going through because she had a husband with a mental illness.

She was also an out-of-towner. Mount Gambia is a touristy town and they don’t accept people who move in from other States very easily. It’s hard to make friends down there, but I made quite a few friends and the Rock Chick was one of them.

The mental health team in Mount Gambia took a more friendly approach and I got to know a few of the professionals there. Once a year I still ring up a mental health support organisation and have a one-hour chat.

On the flip side resources are few and far between. They don’t have a psychiatrist in every hospital and the closest to me at the time was five hours away in Adelaide. So consultations took place over the internet.

In terms of support the ‘Angelic Mental Health Nurse’ actually sat with me when I went for a CT scan. She wasn’t supposed to – according to the regulations – but it meant a lot to me that she did.

It was a confused period of time as well. I didn’t know who I could talk to about what things. The community support workers were non-clinical and then the case manager was clinical but non-clinical at the same time – it was bewildering at times.

When I moved back to New South Wales I saw a psychiatrist every two or three weeks for a time. I’ve been able to build support networks through friends. I have one friend who doesn’t believe in medication for herself, but personally if I wasn’t on medication I’d be hallucinating from the time I woke up to when I go to sleep. Some of the friends I know have mental illness – some are in the system and some aren’t. Some friendships have lasted for over 20 years – one friend is an artist, but doesn’t get stuff published or anything, but she’s creative.

My creativity has been a lifeline. It’s pulled me out of depression and has helped me to keep going. I have written a lot about mental illness and the situations I deal with and I have come to understand myself better as result.

Writing has given me a focus while I don’t have a full-time job and with the help of a psychologist I’ve found techniques that have helped me improve my writing. So, for example, I found that I was writing about experiences that made me anxious so I was spending the whole night awake. I couldn’t sleep and then I couldn’t finish the writing I’d started. Learning this technique has helped my poetry improve so I can write about stuff without falling into post traumatic disorder flashbacks and depression.

I find language and words fascinating. They talk about black and white thinking as a symptom of mental illness and I used to feel the world was in black and white. However, I have gone through a process of inventing colour for myself.

Part of that has been about reclaiming my cultural heritage, learning Tongan. My mum was Tongan but I never got to speak the language. It’s complex and interesting and I am fascinated by the connections between words in different languages.

So for example, John in Tongan is pronounced Sione and is spelt the same in Samoan but pronounced with a silent ‘e’. In Polynesian culture there are lots of words that are slightly changed from their counterpart in other languages.

Even though they are thousands of miles apart, the Egyptian pyramids at Giza, the ancient Tongan site The Ha’amonga ‘O Maui and Stonehenge in England are all linked to the constellation of Orion. Culturally, there are links between the way that language, art and science have evolved that are universal.

And so as I say in one of my poems ‘Invention of Grey’ I have been sorting out the grey areas while waiting for colour to be invented.

I call myself an Arts and Media Mental Health Advocate because I use my creative output – poetry, memoir and photo stories as a tool to challenge stigma in the media. I combat it by putting my lived experience out there – giving training to staff in libraries, schools, police and the fire and ambulance services.

I tell the truth of what’s happened to me – like hearing voices for instance. No-ones ever been hurt by it. I might walk around the same space for hours mumbling to myself if I’m being distracted by hallucinations – but that doesn’t make me a danger.

The statistics on people with mental health conditions harming others is 0.005 per cent whereas the media tend to concentrate wholly on stories about scandal rather than the human story. Instead, the media could be making a positive impact on helping friends and families understand better what their loved ones are going through.

Not everyone has their brain wired in the same way and we should be celebrating diversity not punishing people for being different. The mental health services need to understand that it’s not all about medicine. There are a whole bunch of other factors – housing, employment, a person’s social situation. Creativity has improved my situation a lot.

I haven’t been offered any other Grant-funded projects, other than the Poetry Trail, which is currently in the process of being installed. But I kinda realised The Gospel of Schizophrenia was 2015, and so I plan to start working on my second book.

I umm-ed and ahh-ed a lot about carrying on the plan of the five-part series of the memoirs/cover-to-cover poetry book. But I’ve decided to carry on with it. So the next in the series will be The Way of the Relapse, poetry book that will carry on from the Gospel of Schizophrenia as a sequel. Then the other books will carry on after each other in a series of five books piecing together my recovery journey.

To connect with Richard J Bell you can follow the links below:

I wait
for colour to be invented 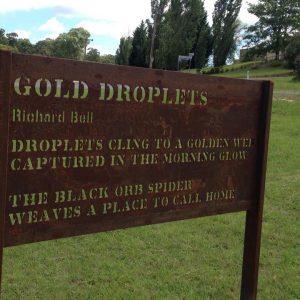 The Masquerade of Disclosure

Lovely to read about your journey Richard. I wish you best of luck with the follow-up to the Gospel of Schizophrnia