The Newbridge Project in Gateshead hosts self-taught artist, performer and writer gobscure’s on rose carved in rain – an exhibition of visual poetry, sound, installation and participation from 20-31 January. Review by Letty McHugh 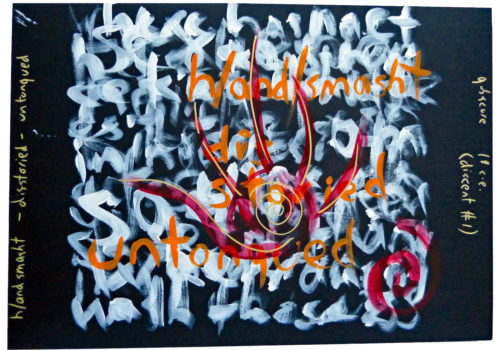 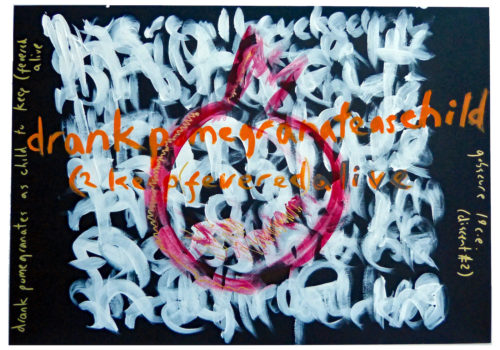 We all have sprawling complicated identities that are difficult to sum up with something as clumsy as words. Most of the time words is all we have to work with.  The truth of who we are as people exists in the intersection of these ideas, we are the most heavily shaded area in the at times contradictory Venn diagram of identifiers. We have layers, we are all more than one thing.

This complicated layering of identity is explored by goscure in their new exhibition on rose carved in rain. Referencing Armenian artist and film maker Sergei Parajanov as a ‘fat, mad, bisexual dissenter’, gobscure realised they shared much in common. The work shown in this exhibition began 17 years ago. gobscure had just been discharged from the worst sectioning of their life to the street, had managed to get into a homeless hostel and was visiting a library to access the computers and came across a DVD of Parajanov’s film ‘The Colour of Pomegranates’.

That’s the thing about identities, the stuff we find the hardest to explain is the easiest to recognise in others. gobscure felt a powerful connection with the work of Parajanov, and the filmmakers ability to keep making art in the face of extreme persecution has been a longstanding source of inspiration for them.

To me the exhibition felt like discovering an ancient temple. I was struck by the beauty and understood that everything there had a significance, everything is there for a reason, sometimes a multitude of reasons, I just wasn’t always sure that I understood what they were.

Take the tables featuring broken Power Rangers figures tenderly displayed on altars of gathered rubbish. Is the point here that we throw away things we might treasure – as an allegory to the way marginalised people are thrown away by society? Or am I over-intellectualizing? 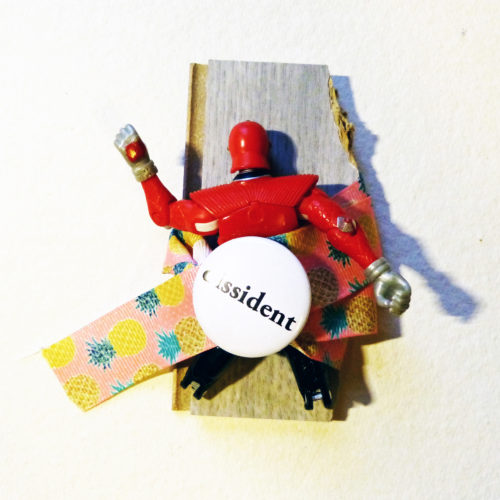 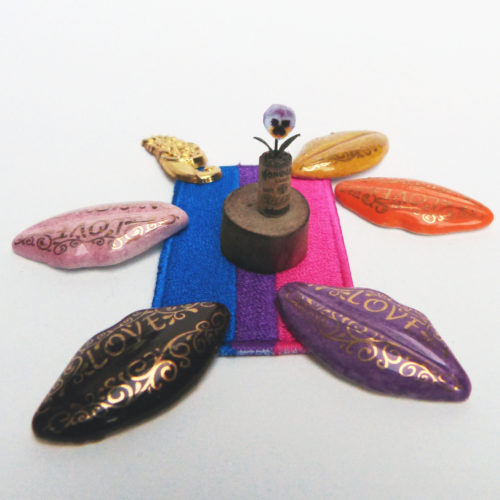 rose carved in rain is at times a little overwhelming with the increasingly loud disorienting sound art and the bold artwork, but given the subject matter I think that is perhaps the point. The search for meaning, the desire to apply your own logic to a system where the logic is entirely foreign is very familiar for anyone who has ever spent time dealing with the bureaucracies of care.

Layering is everywhere in this show, from the paintings which layer mysterious symbols over visually expressive writing (printed copies of the text were available), to the artist book which features names of other persecuted artists with a list of words after their names, alternatives suggested by spell check.

However, I came away from the exhibition wishing I’d heard less about Parajanov and more about gobscure. The highlight of the show for me was the opening night performance, where we heard stories from the artist’s childhood, their mother nursing them back to health with pomegranate seeds, a neighbour teaching them to draw the birds they could see out of the bedroom window through their illness. I hope these themes will be expanded on in their upcoming performance at the Leeds Playhouse on the 11th of March.

This artist has interesting things to say, and I hope that we all get plenty more opportunities to try and figure out what those things mean.

I enjoyed the poems shared very much. I think the found art was partly influenced by Paradjanov doing the same, you may be right in your meaning seeking and other things may be too? I was at the opening too, it went with a bang. I like what you say about identities too, I’m thinking a lot about a line by Milosz at the moment that Seamus Heaney used which may be relevant ‘the soul exceeds its circumstance’, I thought of it that night. I love that this exists and look forward to the film screening and workshop too. Your… Read more »

not sure i put that well, hope it’s ok to say. It’s cool review, brought i all back and made me think.

It’s fine to say, really interesting to read others thoughts! Thanks for sharing your take.