Written and performed by Athena Stevens, Scrounger is inspired by real life events that Stevens experienced in October 2015 . A no holds barred look at Britain’s treatment of disabled people, the play is currently staged at the Finborough Theatre, London. Review by Natasha Sutton-Williams 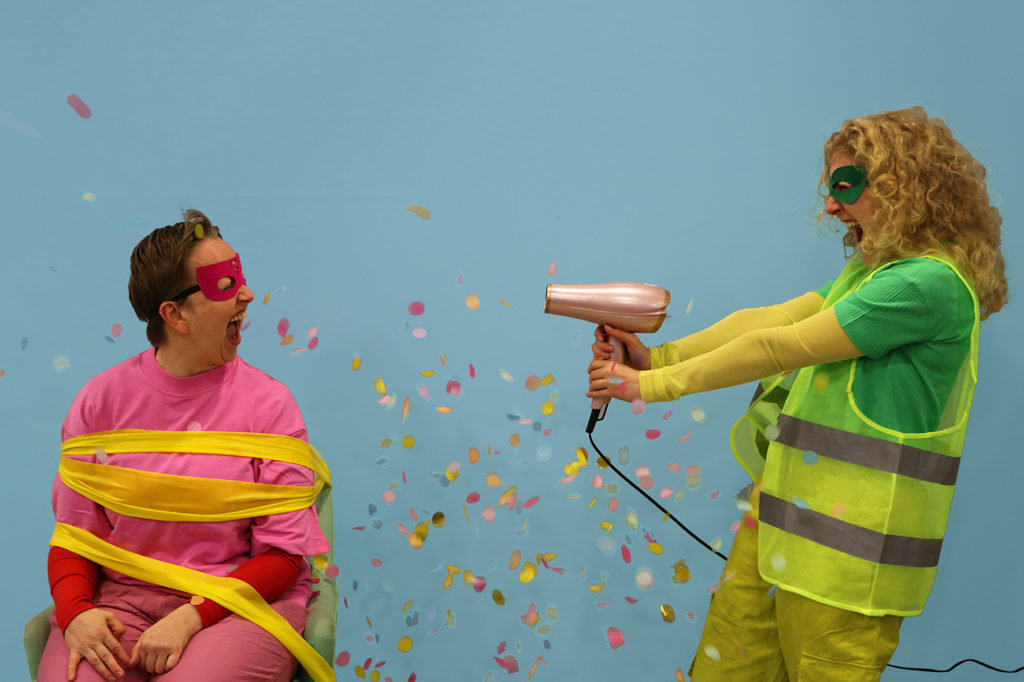 When trying to make a flight from London to Glasgow, the cabin crew removed Stevens from an airplane before take-off, although she had provided the airline with all the information they needed in advance. The flight attendants couldn’t fit her £30,000 wheelchair into the hold, returned it to her severely damaged and would not replace it. As the character of Scrounger, Stevens begins a traumatic quest for justice: filing lawsuits, sparking broadcast media attention, creating Twitter storms and online petitions, telling anyone who will listen about the sustained injustice she has suffered through this catastrophic event.

Scrounger painstakingly goes through each beat of this story, detailing the addictive media attention highs and insurmountable lows of this distressing lived experience. For 85 days Scrounger is left wheelchair-less and almost entirely immobile in her flat, with a sympathetic yet simplistic boyfriend who exults in the power of positivity, and a best friend who would rather run a marathon for kids living in a country she can’t remember the name of than visit her friend in need.

Stevens – as always – is captivating as a performer. She’s straightforward to the point of bluntness, and is genuinely fierce, fuelled by her outrage. The bubbly Leigh Quinn plays Scrounger’s PA, who embodies the multitude of colourful characters that Scrounger meets, as well as creating many of the quirky sound effects. Stevens’ long time collaborator Lily McLeish (who directed Stevens’ Schism at the Park Theatre) creates a dynamic theatrical landscape for the action to take place. McLeish’s unflinching direction highlights that while all may be rosy, compassionate and twee on the outside, there are venomous undercurrents to seemingly innocuous characters and situations.

There are three direct addresses interspersed throughout the play, where Scrounger brusquely calls out the audience for their progressive, liberal-minded yet discriminating prejudices. It is a difficult feat to pull off, especially as the audience are there to engage with Scrounger’s story. These direct addresses are intended to be uncomfortable for the audience, however there is a fine line between making audience members truly question their ethics, and simply insulting people who may have more in common with Scrounger and her perspective than is implied.

There is no denying that Stevens is a force of nature. She is a writer, performer and director, and her prolific output of work has been produced for theatre, film, TV and radio. She is an Associate Artist at Shakespeare’s Globe, where she is directing and curating Notes to the Forgotten She-Wolves in the Sam Wanamaker Season 2020. Schism – which Stevens wrote and performed – was nominated for an OffWestEnd Award for Best Female Performance in a Play and an Olivier Award in 2019. If you thought she wasn’t busy enough, she is also a Huffington Post contributor, a Tedx speaker, and the Equality in the Media Spokesperson for the Women’s Equality Party.

Stevens is a theatrical warrior and Scrounger is her battle cry. The show demands that we acknowledge how British society insidiously oppresses disabled people and how we as individuals play our part in this enduring persecution. Scrounger is loud, Scrounger is angry and Scrounger is going to question your inherent biases, whether you like it or not.

ACCESSIBILITY
There are 23 steps to the theatre (including a turn in the stairs) with a handrail on the left-hand side. On request, the theatre can arrange a touch guide to the set and props, or prepare audio and large print versions of programmes and the brochure.

Guide and hearing dogs are welcome in the auditorium.

All seats are unreserved, and are in bench seating format, but the doors open to the auditorium 30 minutes before each performance, so if you are there then, you can choose your seat to suit your particular requirements.

Please call 020 7244 7439 or email us on admin@finboroughtheatre.co.uk and the theatre will do everything possible to accommodate you.

For further information go to www.finboroughtheatre.co.uk

Post Show Discussion 22nd January
Producer Sarah Lawrie will lead a conversation with Scrounger playwright Athena Stevens, the Chair of campaigning organisation 38 Degrees Srabani Sen OBE and the Personal Finance Editor of The Mail on Sunday Jeff Prestridge. Athena, Srabani and Jeff will talk about the play in the context of consumer rights and ‘taking on the system’, and answer audience questions.

Relaxed performance 26 January
The matinee on Sunday 26 January will be a relaxed performance, designed to welcome audience members who will benefit from a less formal theatre-going experience. The house lights will remain on, at a low level, throughout, and music and sound effects will be quieter than usual. Please note that these shows are for anyone.

I haven’t seen the play (but hope to soon) but I have to warn visitors that there has been a serious failure by the owner of the pub when it comes to disabled people. He took the decision to rip out the disabled persons’ toilet to install a kitchen and this only leaves toilets downstairs, so you have to be able to use the stairs. I have been in contact with the council and it seems that despite lies by the owner, Darren Nolan, that he had got permission from RBKC, he hadn’t. John Pring from Disability News Service has… Read more »