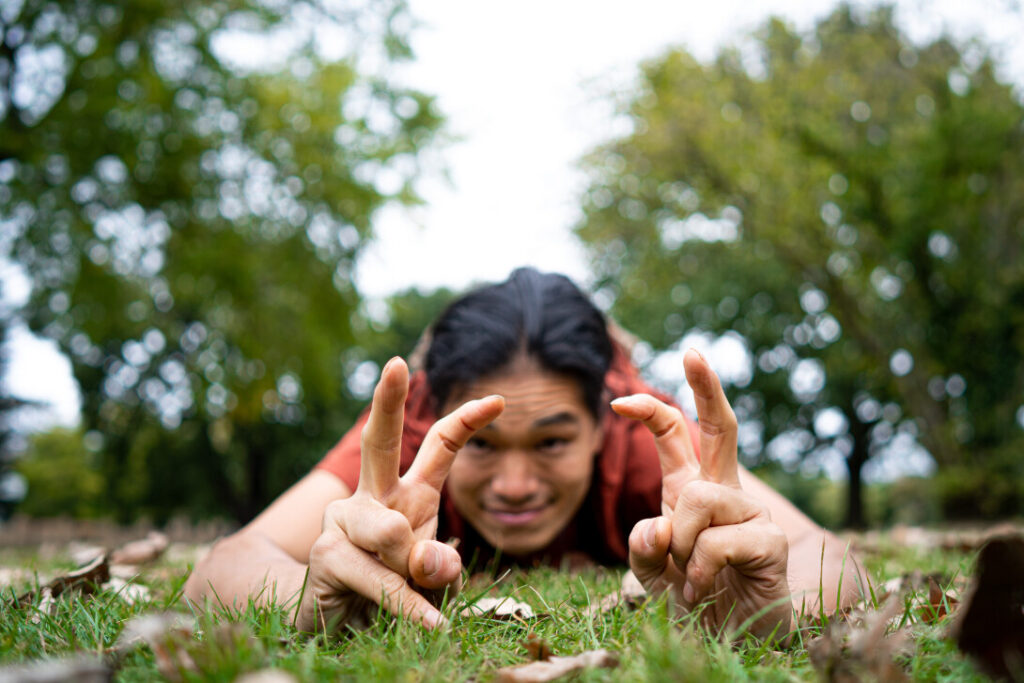 Insect Hands was available for streaming for two days during the Unlimited Festival and lit up the living room with its simple beauty. Shot in outdoor locations, a solo dancer responds to the creepy crawlies and flying insects found in a park and, deliciously, a secret garden discovered in the second part.

Watching the film feels like enjoying a perfectly baked loaf of bread or a cup of tea made just as you like it. The concept of the film is uncomplicated but executed with effortless exquisiteness. While the sample size of this household’s audience is small, it speaks volumes that the piece mesmerised a four-month-old, a two-year-old and two adults in their thirties, who all watched with similarly rapt attention. The joyousness of exploring the bright green grass and the common six-legged friends found in the garden transcends age – the piece is aimed at children aged 4 – 7, but truly, it can be enjoyed by everyone. The audio described version of the film is a delight too – the description is provided by Rationale Method and is as jaunty and spirited to listen to as the dance is to watch.

Whether or not Insect Hands was originally planned to be an in-person experience, what’s particularly striking is that this doesn’t feel like someone pointing a camera at what should be a live dance piece. It is absolutely a dance film and the camera joins in the fun, with shots at worm-eye view as Matsumoto wriggles across the lawn and light, floating shots from above, the camera itself a butterfly. Matsumoto’s performance is pitched perfectly: his skill as a dancer is evident, but everything he creates feels accessible enough to try out yourself in some way, irrespective of age or mobility. The dance has its roots in the natural playfulness of children faithfully mimicking animals for fun and transforms this familiar past-time into art wonderfully.

An additional layer in Insect Hands is the way it brings the outside world indoors at a time when nature and its pleasures are more remote than ever for so many people, especially those living in urban areas or who must shield. Even in a biting January, the film transports you to a sunbathed grassy park, with close-ups on gnarly tree trunks and misty greenhouse panes adding to the atmosphere.

Second Hand Dance specialises in creating sensory dance for children and I’m delighted that a locked-down Unlimited Festival allowed them to let loose their impish bugs to dance amok across my screen, bringing a fresh summer breeze into my domestic space.

Insect Hands produced by Second Hand Dance was available for streaming on 14th and 15th January as part of Unlimited Festival 2021.