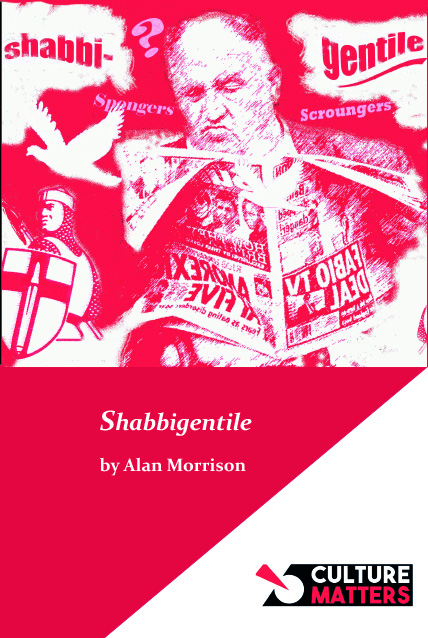 If ‘Tan Raptures’ (2017) was an A-side then ‘Shabbigentile’ is its experimental B-side: both collections explore the repercussions of austerity, the relentless benefits cuts, and the mass campaign of welfare-stigmatisation (which I coin as ‘Scroungerology’). But, as its off-beat title suggests, ‘Shabbigentile’ grabs its subject with a more grotesque satirical hand. Much of it was written over the past few years and simultaneous to ‘Tan Raptures’, some of the poems kept over from that originally overlong collection.

Soon newer poems were developing along similar themes and eventually I had another very distinct collection looking for publication. That opportunity came through Culture Matters, a relatively new, progressive publisher of poetry and prose with an implicit commitment to a cultural commons. Its editor Mike Quille commissioned a collection from me and a manuscript initially entitled ‘Common Music’ was duly accepted for publication under his imprint.

But soon the concept behind the newest of the poems, ‘Shabby Gentile’, outgrew itself and, with a bit of jumbling, became the new umbrella title for the book: ‘Shabbigentile’ – a neologism which puns on the term ‘shabby-genteel’ (definition: preserving or aspiring to gentility in spite of being materially poor).

The title also references Gentile, meaning non-Jew, because this book is mainly about the ingrained prejudices of the Gentiles, or more specifically, the English Gentiles. This can incorporate an often only semi-articulated anti-Semitism (perhaps in part from distant folk memory of the 1290 Edict of Expulsion under Edward I). Though today Islamophobia is arguably the more prominent of the English Gentile prejudices, and is something I address in a short poem, ‘Zaghareet’ (named after the high-pitched tongue-ululation in the traditional singing of Arab women).

‘Shabby Gentile’ depicts the typical white working-class or lower-middle-class English Gentile who is drip-fed prejudices by the right-wing red-top tabloids – and is likely to be a Ukip/ Brexit Party or EDL/ Britain First supporter. He is represented on the cover as a burly tabloid-reader flanked by the English Knight motifs of the Daily Express, though these particular Templars clutch giant biros instead of swords. This contemporary folk figure (or devil, depending on one’s point of view), disparaged as ‘gammon’ by some commentators for his skin-pinking angriness, is now championed by right wing politicians. As Grace Blakeley put it in a recent New Statesman piece: ‘Populist politicians build their base by constructing an in-group —in this case, hardworking, white Britons—  and pitching themselves as the champions of this “oppressed” group. They then blame the out-group – Muslims, migrants and scroungers — for the hardships everyone else is suffering’.

Elsewhere in the book, ‘Brexit’ is anticipated as a tin-pot enterprise in ‘RURITANNIA!’, the title of which is a play on both ‘Ruritania’, the fictional 19th century realm in Antony Hope’s ‘The Prisoner of Zenda’, and ‘Rule Britannia’. The Bakelite romanticisation of the Blitz era (cue those ubiquitous KEEP CALM AND CARRY ON memes) propagated by the Coalition Government, and now that of a Faragist nostalgia for a pre-welfare state/-mass immigration England, is also tackled in poems such as ‘Thirties Rut: Clocks Back Britain’ (themes I previously explored in Odour of Devon Violet).

But the main polemical point of this book is to highlight the hypocrisy of the red-top press and (mostly) Tory politicians who accuse Jeremy Corbyn and Labour of ‘anti-Semitism’ whilst themselves (under the subterfuge of decadal austerity) resurrecting and disseminating near-identical rhetoric and lexicon to that of anti-Semitism, only substituting the traditional target with benefit claimants and the sick and disabled. Terms such as ‘scroungers’, ‘shirkers’, ‘spongers’, ‘parasites’, ‘malingerers’, ‘loafers’, ‘undesirables’, ‘workshy’ etc. have been routinely deployed against the unemployed and disabled for years now in much of the mainstream press.

Few today have batted an eyelid at the onslaught of hate-inciting vitriol directed against society’s most vulnerable and impoverished citizens — what one might term anti-Claimantism. Such vicious propaganda, replete with often bogus ‘scrounger’ and ‘benefit cheat’ tabloid splashes, has been orchestrated for decades but became almost ubiquitous during the first few years of Tory-imposed austerity. This was a deliberate stratagem to justify and win public support for the draconian and remorseless regimen of vindictive benefits cuts, sanctions regimes and the notorious ‘work capability assessments’ resulting in tens of thousands of premature deaths and suicides, and playing a large part in the United Nations’ condemnation of the Tory Government for abuses of disability rights.

And in wider society, through the prevalence of semantically out-dated, yet still just as prohibitive and discriminatory, ‘No DSS’ clauses increasingly used by private landlords and lettings agents, we’ve seen a normalisation of discrimination against benefit claimants, including the sick and disabled. When people feel they have to try and hide the fact they are on welfare benefits in order to get somewhere to live, it doesn’t seem so far removed from the Jews in early Nazi Germany feeling they had to disguise their Jewishness from the authorities. Today’s claimants, if you will, have to hide their ‘welfarishness’.

In this spirit, my poem ‘St Jude and the Welfare Jew’ (first drafted in 2013) addresses this leitmotiv, juxtaposing the perennial plight of the starkest historical figure of persecution, the Jew, in terms of the slow-burn rhetorical persecution endured in Germany in the 20s and 30s -–a drip-drip of prejudice that slowly poisoned the minds of their peers and neighbours, paving the way to the ghettoes (that stigmatising “closed blinds during the day” trope of George Osborne’s when Chancellor springs to mind). So here the figure of the Jew as scapegoat is used in the spirit of solidarity.

The poem concludes that the right-wing press always needs its own form of ‘disposable Jude’: that it has effectively reconfigured anti-Semitism into anti-Claimantism. While the differences between the targets of these prejudices are clear (the former aims at a particular race and religion, the latter at an economic grouping), much sickness and disability is chronic and thus also a permanent ‘characteristic’. Disabled claimants are thus being persecuted by the State (however circuitously) for being disabled: something fundamental to their identity and existence.

The following epigram from the poem crystallises the spirit of the collection:

So it’s permanent open season
For press-persecution of the unemployed
As “parasites” —fleas of unearned leisure;
Castigating strugglers as “scroungers”
Is judgemental England’s guiltless pleasure…

‘The Problem With Jeremy’ is a polemical poem which recapitulates the constant stream of allegations and red top propaganda deployed against Jeremy Corbyn since he became Labour leader in 2015, with particular emphasis on the accusation that he fraternised with a fringe Jewish group deemed by some more mainstream ones to consist of ‘the wrong kind of Jew’ — a quote from a 2018 Guardian article by Rachel Shabi.

Focusing more on the theme of disability, the final and longest poem in the book, ‘Another Five Giants’, chronicles the history of the British welfare state, but more specifically, the latter-day decades-long political-psychiatric-pharmaceutical conspiracy to redefine ‘disability’ and ‘sickness’ for economic purposes, and the corruption of occupational therapeutic ethics in the process, towards the Kafkaesque ‘work cure’ and ‘fitness note’ culture which afflicts us today.

This covert campaign began in 2001 at a psychosocial Conference in Oxfordshire, menacingly titled ‘Malingering and illness deception’, linked to a US insurance company called UnumProvident, which led to the 2005 ‘Waddell and Aylward Report’, the actual title of which was The Scientific and Conceptual Basis of Incapacity Benefit. From this came (Lord) David Freud’s 2007 report, ‘Reducing Dependency, Increasing Opportunity: Options for the Future of Welfare To Work’, which directly led to the introduction of the work capability assessments.

But this poem also questions the original intentions of William Beveridge’s much-eulogized Report on Social Insurance and Allied Services (aka the ‘Beveridge Report’), which led to the foundation of the welfare state, unearthing disturbing facts as to the liberal pedagogue’s leanings towards eugenics and how these have covertly informed much welfare policy through the decades. The title ‘Another Five Giants’ alludes to the ‘Five Giant Evils’ Beveridge hoped a welfare state would eradicate (namely, Want, Disease, Idleness, Squalor and Ignorance), superimposing over these the new Five Giants identified by Jeremy Corbyn: Inequality, Neglect, Insecurity, Prejudice and Discrimination. And it is emphatically those last two evils that Shabbigentile is intended to highlight and counter.

Illustrations are part of Culture Matters’ unique mixed media template, the point being to make poetry books look a little bit less forbidding and more accessible, in the spirit of William Blake’s illuminated books. However humbly, Shabbigentile is my contribution to this Blakeian legacy; an illuminated tradition which is never more needed than in this most un-illuminated time.

The book can be ordered via Culture Matters website

I hope the reading in a couple of weeks goes well Alan.