Shape Arts’ flagship annual exhibition, the Shape Open, this year took the theme of ‘Collective Influence’. It is on display at the The Art Pavilion, East London from 22 March to 5 April. This group show features the work of more than 30 disabled and non-disabled artists. Review by James Zatka-Haas. Each year Shape’s annual Open presents a theme reflecting, if indirectly, some of the key debates surrounding culture in that particular period. 2017’s Open addressed power, and what artists can do to challenge it. This year’s theme, entitled ‘Collective Influence’ extends that; posing questions about what it is to be (or not to be) part of the bigger mass – and how that mass influences us both as individuals and as members of society. On the whole, the work responded well to this provocation, presenting pieces that covered individual senses, mental health and the relationship between disability and the DWP.

Memory, perception and disappearance played a big role in ‘Collective Influence.’ Attia Rashid’s ‘Losing Memory’ was a particular highlight here. The work is a painting of a scene (a memory) with grey squares overlayed on top. It speaks about the deterioration of memory, how those places once familiar to us are gradually forgotten through the passing of time. Although the work is consciously about the individual, I found myself linking it to other works, thinking about how memory and disappearance play a significant role in our collective society. In this light, Anahita Harding’s ‘Coat Rack’ felt all the more pertinent. Exploring the individual and the collective, Anahita comically nailed a coat rail to the wall out of reach to anyone. At first glance the piece appeared as an apt metaphor for access, pointing to a lack of it. On further reflection however, the work dived deeper. It wonderfully captured both the hierarchy that separates people who are disabled and people who are not, and enquired into the nature of what it feels like to be part of ‘the collective’ and what – through exclusion – it feels like to be individualised.

Grace Leigh Igoe’s sculptures ‘Resistance of Change’ and ‘Highs & Lows of Missing Pieces’ beautifully captured the individualising effect of having Autism. One sculpture showed a head with fingers pressing into the skull whilst the other showed a skull with a few pieces missing. I found them to be haunting, masterfully distilling the anxiety and emotional struggles that accompany having an invisible impairment into its purest form. Definitely a highlight of the exhibition.

Some of the sound and video installations lacked the same strength. You Will Find her by DYSPLA aimed to draw parallels between our flawed education system and the mental health crisis, but the finished film felt a little incomplete. The clip showed a woman standing on a beach. She was dressed in a glittery outfit with her face painted grey. She spoke about her time at school, how many of the everyday activities students were asked to perform – such as a spelling competition – exacerbated her anxiety and rendered that period of her life traumatic. Whilst the subject of the film highlighted a serious problem in our schools; one that has largely been ignored, the mode of delivery failed to convey this. Crammed with university grade ‘dream like’ sequences and triangular frames, the end product just felt a little lacking in refinement (compared to the other pieces). If it were produced with a little more sophistication, I feel DYSPLA could make an original contribution to this largely unexplored topic. DYSPLA You Will Fail Her, film still

The music video for ‘Feel The Beat’ by deaf rapper Signkid points to pioneering avenues in hip hop, and the clip, like any quality grime video, showcases his talents as a performer and his ability to own the camera. But the music itself seemed to miss something. The beat was solid, and the sound was well produced, though I feel – admittedly not knowing BSL – that the lyrics could have been more expressive. Where Signkid has an opportunity to explore what it’s like to be a deaf rapper in an industry built on its practitioners ability to communicate vocally, the lyrics ‘making up ‘Feel The Beat’ don’t go further than the fact that we should all really be feeling it (the beat). Still, it’s early days for Signkid, and with a little more development, I think we’ll see a lot more of him.

Overall, however, this year’s Shape Open was both intellectually and visually stimulating. The sheer variety of works on show made for a theme that could be approached from many stances – on the surface addressing the nature of what it is to collectively influence, but, from a disability perspective, highlighting the multitude of barriers preventing that change from happening.

Click here for more information about the Shape Open 2018. 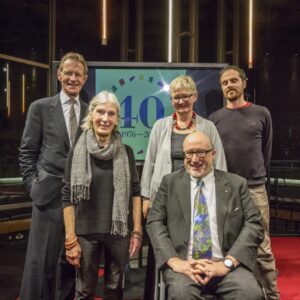 A new chapter for Shape and Tony Heaton

Shape has developed a series of strong programmes and supported hundreds of artists under the direction of Tony Heaton OBE. As Tony steps down from his position as CEO he talks to Disability Arts Online about that long list of achievements, his views on the arts, the political landscape and his own plans for the ... 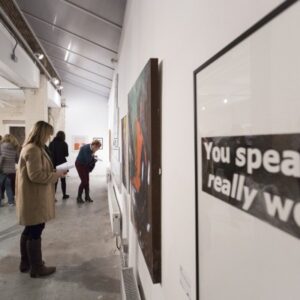 This year Shape present their fourth Open Exhibition with what promises to be the largest attendance yet, undoubtedly helped by the fact it is held in Yinka Shonibare’s Guest Projects studio, just off the thriving gallery scene of Vyner Street in Hackney. Review by Colin Hambrook. The competition, open to disabled and non-disabled artists, put out ... 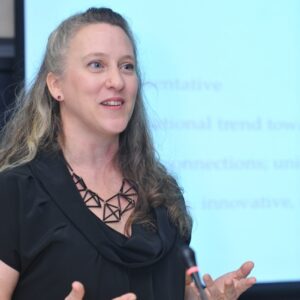