Some cynics say classical music is little more than a museum for dead composers, that it has exhausted its capacity for new ideas.

The initial concept was premiered last August at the 2017 Edinburgh Fringe Festival with Waseem’s Stories of Syria for solo piano. Performed at Stockbridge Church, the vaulted roof filled with swelling chords that blend sweet nostalgia with terrorism’s dark shadows.

Waseem’s skill lies in marshalling a huge dynamic range; he can playfully reel off mid-tempo folk dances; or pummel the keys into a maelstrom of dense harmonics; or brush them with the lightness of a dragonfly on the breeze.

Across five movements – Dawn, Dance, Pain, Hope, Damascus Rose – Waseem unfurls a psychological profile of his homeland, a tightrope-tension between innocence and fear, sorrow and hope for a better future. It was mesmerising 20-minute performance that left me wanting more.

And there was more to come: At the close, Waseem shared news of his commission by Audiovisability to rewrite Stories of Syria for a chamber ensemble. The result to be performed with synchronised live action painting, sign language and captions.

This was an intriguing prospect: Audiovisability is the brainchild of deaf flautist Ruth Montgomery. An ‘audio visual’ collective whose latest iteration blends Arabic and British cultures into dazzling multimedia events. Another innovation: live captions on a big screen (above) track the music’s evolving themes and moods. ‘Unstable’ – ‘Remember peace?’ – ‘A sudden unexpected shift’ – ‘Thick tension’. It’s a pleasing touch, like whispered asides to the audience. Additional cues flag up the ensemble’s techniques: ‘The flute returns to the original melody’ – ‘The oud reminds us of the march’. Scripted by Eloise Garland, the balance was spot on; not fussily detailed or overly prescriptive, empowering the audience to insert their own imaginations into the music. Rachel Gadsden paints in response to the music

Pushing the envelope further: on a slightly-raised stage just behind the ensemble, stands artist Rachel Gadsden with buckets of acrylic paint and five blank canvases – one for each movement.

As Rachel’s paintings (above) evolve in real time to the music , they mind-map Stories of Syria’s physical and emotional impact. Using an abstract expressionist palette of daubed whites, splashed crimsons, bleeding turquoise. Applied with brushes and sticks or by fingertips, knuckles and palms. Improvised strokes that might evoke a throbbing heart or delicate flower, a torn limb or spilt wine.

It’s a perfect marriage with Waseem’s music which itself is never simply ‘picture music’ but takes us on a psychic journey from trauma to hope.

In the west, we’re often guilty of holding a two-dimensional view of Syria – framed by 24/7 media images of Kalashnikov-waving terrorists and concrete ruins. The 2nd movement ‘Dance’ reminds us it was not always so. Adapting the classical Rondo form (= ‘circle’), it nods to the Syrian Dabkeh tradition of dancing in circles. There’s a communal spirit as the ensemble plays in unison while allowing generous space for each individual musician to take turns in driving the melody forwards. A one-for-all, all-for-one Syria before factional divide-and-rule tore it apart. Nadia Nadarajah interpreting the music in BSL, with James Greenfield on cello

Audiovisability throws us another gambit: deaf actress Nadia Nadarajah (above with James Greenfield on cello) steps up to unfurl her British Sign Language (BSL) and ‘conduct’ and ‘interpret’ the music, using a deft mix of BSL storytelling and improvised gestures that signal the music’s repetition, rhythm, rhyme, alliteration, and metre.

This is something of a ‘research and development’ technique that has huge potential. As an experienced actress, Nadia is supersensitive to the role of facial expression and body language in theatre. Far from being just an interpreter, she dramatises Stories of Syria’s narrative and brings an added pulse to the music too.

As ‘Dance’ ends, an eerie silence falls. Then, one of the evening’s key moments; James’ cello opens ‘Pain’ with a long-held cathartic moan, wringing every drop of emotion from his bow. A caption evokes ‘Mothers who have lost their children’. Rachel drags crimson-streaked fingers down the canvas, like a prisoner in solitary confinement gripping the cell walls. Nadia’s existential body language connects to all of us whatever language we speak or sign.

It’s a harrowing moment that stops the audience in its collective tracks – musicians, artist, BSL signer, captions, audience, all fused together in a universal cry of pain.

Over the next three minutes, ‘Pain’ leads us on a slow, hypnotic funeral march through a limbo of mourning strings and heartbeat rhythms from Helen’s plucked viola and Jamal’s gently finger-tapped heartbeat rhythms. During this passage, I recall the poet John Donne’s famous line on hearing a funeral bell: ‘Ask not to know for whom the bell tolls, it tolls for thee’, reminding us that all of us in the west are diminished by this war and the suffering it causes.

The tempo gathers once more with the 4th movement’s tentatively upbeat ‘Hope’ until Rihab’s solo tango (above) for oud introduces ‘Damascus Rose’. As Ruth’s flute takes its cue from a famous Syrian folk tune, to evoke a flower’s petals opening to a brighter future, James’s cello interjects a note of caution, reminding us that for many Syrians ‘home’ is a place of love and pride with an underlying sorrow that never entirely leaves. After the interval, the ensemble returns to tackle a second theme – ‘migration’. In the three-movement Belonging, Waseem alludes to the life story of deaf textile artist Omeima Mudawi-Rowlings. It’s a sublime evocation; Omeima’s Sudanese-Arabic childhood beside the river Nile, her sudden deafness aged four by meningitis, and subsequent migration to deaf school in London.

In the aisle, three of Omeima’s translucent textile panels (above) hang on display, backlit with spotlights until they glow like African sunshine in Brighton’s wintry darkness. One could pass a whole evening scanning the details. Each panel a micro-world in itself. Intricate patterns and lines resemble Arabic script or audiogram charts, musical notation or childhood memories. A visual narrative that amplifies Waseem’s music (and vice versa).

In another technological twist, the accompanying photography and textile exhibition enabled visitors to use Signly’s new mobile phone app to display on-screen BSL translations of the exhibit captions.

The Unheard World ends on a third theme – displacement – reminding us of the ongoing cost of Syrian war; the trauma experienced by over three million of asylum seekers and refugees. This is bought to vivid life by a video short by deaf film-maker Ramon Woolfe of his 11-year old daughter Layla’s BSL poem – soundtracked by Rihab’s plaintive oud solo. Through her native sign language, Layla’s gives a voice to the dreams of a six-year old deaf asylum seeker Lawand Hamadamin. He’s currently safe and being temporarily schooled at Derby’s Royal School for the Deaf. Yet his family still await a high court judgement on their application to remain in the UK.

From an audio-visual perspective, The Unheard World is a lot to take in. Yet it consistently hits the spot for me, and judging by the rapturous applause, for the wider audience too (a mixture of Brighton’s general public and deaf community members). With thoughtful staging, Audiovisability empowers us to enjoy music on different levels. You can choose as and when to switch focus between musicians, painting, captions or BSL, each a standalone element while adding value to the overall performance.

Ask a random stranger in the street about “classical music” or “music and deaf people” and you’ll likely get some fumbling response about “posh music” and “shame that some can’t hear music”. Audiovisability not only challenges these tired assumptions, it alchemises a whole new way of enjoying music.

This project is surely only just beginning and deserves a far wider audience.

Review published by kind permission of Ruth Montgomery and Audiovisability.

The Unheard World was performed at the Fabrica, Brighton on 6 December 2017. A further performance will take place at Arlington Arts Centre, Newbury RG14 3BQ from 15th January – 9th March 2018. Please click on this link to visit Audiovisability for more information.

The project is funded by Arts Council England, The Arab British Centre, and Decibels Year of Sound. 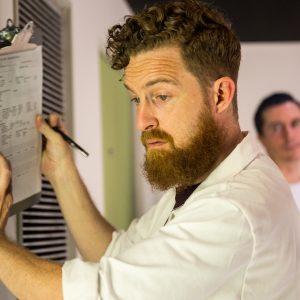 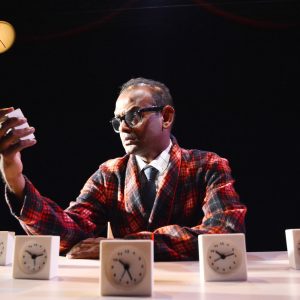 Ramesh Meyyappan is becoming more widely celebrated for his darkly comic brand of visual theatre. Paul F Cockburn caught his latest production Off-Kilter at the Tron Theatre, Glasgow, as part of its Mayfesto 2017 season. Internationally-acclaimed performer Ramesh Meyyappan enjoyed sell-out performances around the world for his most recent show, Butterfly. Whether or not Off-Kilter will ... 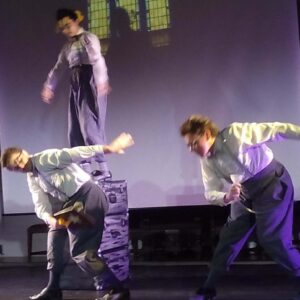 Today I’m launching my DAO blog, which will mostly feature information and updates about my ongoing disabled- and Deaf-themed art projects and collaborations. I also like to write about other artists who create, interrogate and interrupt narratives around disability, Deaf culture, (a)gender, class, (a)sexuality, colonialism and race – and my experiences as a queer crip ...