Ivan Riches is a disabled visual/ sonic artist, filmmaker, musician/ composer and writer. He talks to DAO about his final conclusions from the research and development project Surroundings after nine months of work.

I began developing ‘Surroundings’ following personal impairment related issues that changed my relationship to my immediate environment. I wondered what it was like for other disabled people; whether there were similarities in barriers encountered and whether those experiences chimed with non-disabled people.

In brief the artwork I planned, involved interviewing a range of people in three locations (locations that I had connections with); editing a soundtrack of their voices and accompanying it with an installation of collaged images of my experience of traveling through and photographing/filming those locations where the people I was engaging with live – along with an improvised layer of live music.

Each participant shared stories relating to their cultural, social backgrounds and experiences from personal viewpoints on the theme of ‘surroundings’. There were marked differences between people from the three different locations. Only after the final installation/performance did I realise the potential impact of the project as a whole, in the possibility of nurturing empathy and understanding from my audiences. And participants’ initial responses to the final edited voice soundtrack focused on hearing their own experiences within an edited stream of other peoples’ stories. Many of the participants told me how important it was for them to share their stories and how it gave them a sense of being connected with the other participants.

Interestingly, the German participants had a nuanced interpretation of the concept of ‘surroundings’ due to the differences between German and English language. For them it was much more focussed on feelings about ‘home’ or ‘homeland’ and their shared experiences of migration. For the participants from North Devon and Southwark it was interpreted much more in terms of changes in the environment they grew up in, or that they moved into. In general the UK participants stories were more related to their physical, social conditions, development and changes within the environment. And many of the UK participants expressed shock at the extreme experiences, hardship, fear, sadness and loss in the stories told by the German participants because trauma from invasion and foreign occupation are experiences that most of the British people had not been through.

The events at the South London Gallery and The Plough Art Centre raised some brief uncomfortable discussions about attitudinal and institutional barriers, particularly concerning experiences of differences in race, colour or culture – particularly during the 60s and 70s when extreme attitudinal behaviours were endemic, often entrenched in racism. And there was some discussion as to whether these experiences could be paralleled with attitudinal and institutional barriers for disabled people. One story of discrimination at school chimed with many of the non-disabled as it did with most of the disabled people. 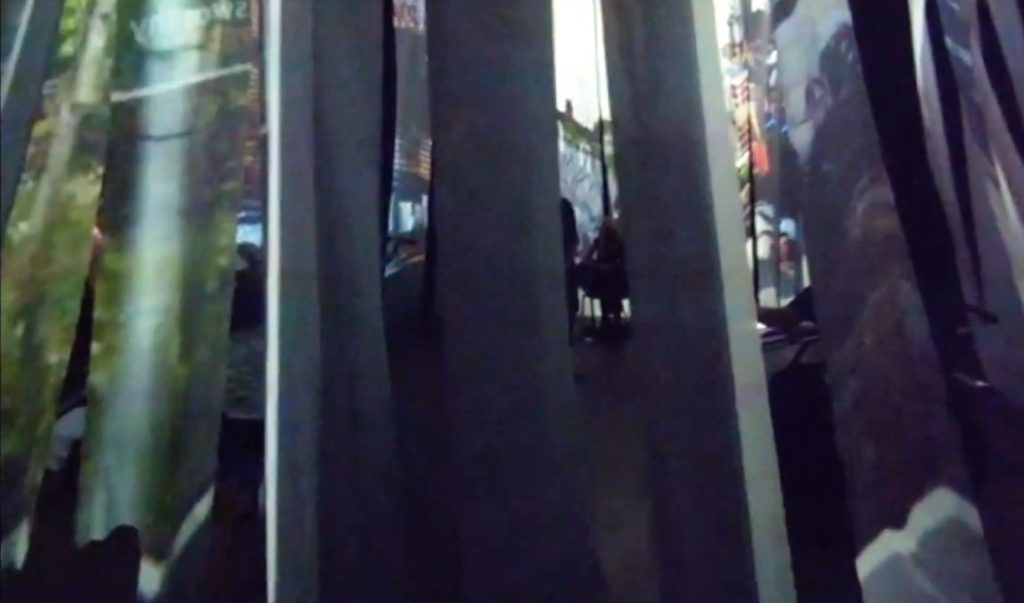 In terms of editing the voice soundtrack, I felt a strong reaction to each shared experience and intuitively pieced stories together to form a timeline from childhood to the present day. The stories seemed to have a flow, mainly around the differences between migration and decisions to stay in, or return to childhood locations/surroundings. And the shared timeline was linear in terms of selecting experiences that work together over a timespan, rather than singling out personal stories verbatim within their own timelines, which would have resulted in an artwork that would last much more than 40 minutes.

It was a matter of being concise enough to attract attention to the subject ‘surroundings’ rather than relate each participant’s story verbatim, as each interviewee had half an hour to an hour of talking recorded and there were 26 participants to include in some way, however small in content. That’s the subjectivity of editing. I recognise this can prove problematic and that people looking for life stories to latch on to, may not pick up on the gist of the stream of consciousness I was attempting to set free. And therefore the soundtrack could be seen as hit-and-miss. You draw your own conclusions and opinions and that is the point of the project. By working in this way, I have deliberately constructed platforms for debate and it is up to my audience whether they chose to respond directly or indirectly to me in any way they wish.

The direction of this artwork is not an experiment that I can hide behind. I want my audience to respond directly and give their honest feedback, in the same way as with my relationship with my participants, as some of their opinions I found uncomfortable to listen to. But I did not put myself in a position to judge. If I had I would not have been trusted and that would have restricted the outcome of my artwork and impeded my inquiry. As for my audience, honest feedback is all I want, so that I can further develop as an artist by not allowing myself to become too comfortable in what I can do.

In terms of the future of the project, I see its potential for creating a bridge for sharing understanding between disabled and non-disabled people, particularly those who have migrated to another country, or who have moved from a city to a small rural area. ‘Surroundings’ resonates with the idea of being a ‘stranger in a strange land’ drawn from my experience of having to use a wheelchair in recent years, forcing me to learn to renegotiate my environment.

As for online discourse, people have been encouraged to feedback and I hope there will be more discussion, particularly from people within the DAO community.

This R&D has lead to a project that offers more questions than answers, at this time. Feedback and its evaluation, is proving to be convoluted but I plan to continue the research and tour my current findings/artwork/outcomes. I want to develop new artworks in relationship to each new location I work in and open wider opportunities for discourse.