Poet, mother, Station Supervisor for the London Tubes, and co-writer of Labour’s Neurodiversity Manifesto; Janine Booth is a woman of many trades, as well as trade unions. She talks to Emma Robdale about poetry and activism. 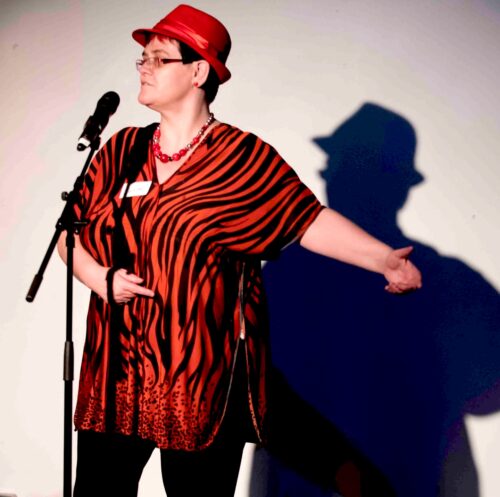 Janine firmly advocates that the Neurodivergent Movement needs to be entrenched within wider political groups and has started paving the way herself. She has not only published several political papers, but also channelled her passion, her fury and first-hand awareness of what it means to be a working-class autistic woman into remarkably apt stand-up poetry. Fiercely witty and as direct as a bullet, Janine Booth never misses a beat.

It wasn’t until Janine Booth’s son acquired an autistic spectrum diagnosis that she started to learn more about its nuances; at 45, in 2012, she saw a correlation between autism and her own identity, describing the realisation as feeling as if ‘little lightbulbs were starting to switch on in my head’. She had recently experienced bullying within her workplace (sadly a commonplace scenario for ND individuals), which had led to a breakdown.

Stemming from both her own and her son’s experiences of discriminatory rejections Janine wrote ‘Why Can’t You Just Be Normal?’ a poem illuminating the hardships, prejudices and downright stupidity of a world which ultimately strives for ‘normal’… 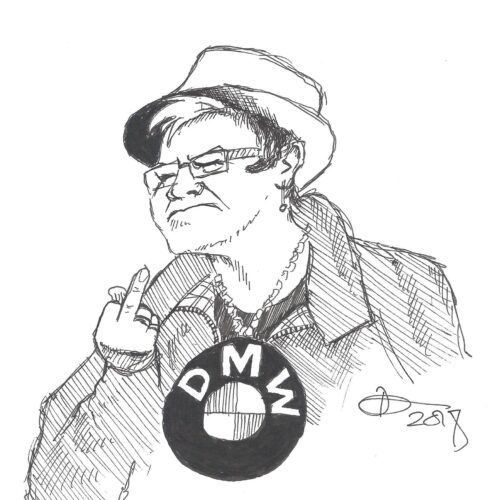 Throughout her life Janine had found institutions harsh and unaccommodating. After discussing her own experiences with a diagnostician, she acquired a diagnosis of autism. Janine describes this identification as suddenly feeling as though past difficulties had fallen into place: “It was like being short-sighted all my life and finally getting a pair of glasses. Now I understood why I had always felt different, where my strengths and my challenges came from. I was on my trade union’s national executive at the time and set about addressing autism as a trade union issue, primarily by training union reps to fight for autism-friendly workplaces.”

Women’s rights, socialist and worker’s unions were already integral to Janine. She asserts that she has been an “active socialist all my adult life!”. However it was only after diagnosis that she started to campaign directly for neurodivergent rights within these groups; this influence led her to proposing to MP John McDonnell, the then Labour Shadow Chancellor, that a manifesto which specifically tackled issues relating to ND peoples, was needed. And she was given the go-ahead!

Wasting no time Janine found others who shared her vision, detailing the ‘roping in’ of Monique Craine, a passionate Neurodivergent activist, who had already written to Jeremy Corbyn to suggest that a Neurodivergent Shadow Minister was necessary. Combining forces, they dedicated the next three years to drawing together the viewpoints and perspectives of ND individuals across the UK. Spanning generations, ethnicities, sexualities, and genders, they began to compile an intersectional, inclusive manuscript that would have “radical, practical policies that we believed would transform the lives of neurodivergent people.” Janine further expanded that, “for me, the struggle for autistic liberation and the acceptance of neurological diversity is tied up in the wider struggle for human liberation. We live in a capitalist society which both excludes us and commodifies us.”

Solidarity and democracy are at the core of the manifesto. Booth is living, breathing, poetry slamming evidence of the slogan, ‘Nothing About Us, Without Us’. She loudly advocates for inclusive policies, the removal of barriers, and the promotion of ND equality within all sectors. Within her poem ‘Soft Skills’ she succinctly highlights some of her own day-to-day experiences of anxiety and masking within institutions…

As well as poetry Janine also writes practical handbooks that address the environment of ND workspaces, two of which being: ‘Autism Equality in the Workplace: Removing Barriers and Challenging Discrimination’ (Jessica Kingsley 2016), and, ‘Autism in the Workplace: a Handbook for Trade Unionists’ (Trades Union Congress, 2014). She is committed not just to identifying problems, but also ensuring employees recognise how the workplace can be made more accommodating. Additionally, she highlights that it is not simply immoral, but also illegal for employers to ignore ND/disability within the workplace; reasonable adjustments are not an employer’s choice, they are an ND/autistic/disabled employee’s right. Janine Booth aspires to enable ND individuals to better understand and utilize these rights. Her poem ‘Had to Let Him Go’, establishes her robust socialist mentality while also illuminating an extremely raw truth; the fact that currently only 16% of autistic adults are in full time work…

He worked alone, not a team player
Not a keeper or a stayer
Didn’t fit in, not really our sort
Talked about boring stuff, not sport
We had to let him go.
Profit margins were getting low
We didn’t want to let him go
But some things we just can’t afford
We can’t keep funding his support
So we had to let him go.

A substantial barrier affecting autistic individual’s career progression is that many employers still refuse to accommodate difference, even if it is extremely moderate. Janine views the Neurodivergent Movement to be deeply ingrained with wider sociologies that affect class, status and wealth and allies alongside LGBTQ+, Black, Women’s, and ethnic minority rights groups. She not only believes that ‘we’ are stronger together, but also appreciates that ND people exist within every minority. Her strongest alliance is with the Worker’s Movement; Janine believes that, if the ND movement establishes itself within wider organisations their struggle will gain greater strength and recognition, “The Worker’s Movement has great potential social power, and by participating in it, we gain strength from unity with others, and also help the struggles of people within our own ranks who have intersecting experiences of oppression.”

A natural wordsmith she performs spoken word at a range of political and literary events: festivals, book readings, gigs, rallies, protests, and union meetings. Many of her poems have been collated into published anthologies, including: ‘The Three ‘R’s: Ranting, Rhyming and Revolting’, ‘Mostly Hating Tories’, and my personal favourite, ‘Disaffected Middle-Aged Women’.

After watching Janine perform at Lava Elastic’s Neurodivergent comedy night in Brighton, I felt her performance, though unquestionably humorous, was venom-loaded, armed and ready to fire. Every stanza honest and assertive. Each rhyme peeled like an onion, unveiling toxic and unaccommodating truths. Laughs came at the expense of being winded by injustice and inequality. Though down-to-earth and approachable, Janine is certainly not a woman you would want in the opposite corner.

‘Narrative Verdict’ is another extremely poignant and politically charged poem; each stanza details autistic people who have died through the neglect of a system set up to ‘protect’ them. It directly names and makes web-links to each story…

Step forward, Connor Sparrowhawk
He leads a host of souls to tell
their stories from a bitter well
of negligence and ignorance
of culpable indifference

Along with phenomenally high suicide rates, the amount of ND people who suffer neglect and assault within institutions is clearly disproportionate; Janine’s poetry attempts to highlight and remedy the fact that many ND people’s voices have been dehumanised and dismissed. With the same tact she has written ‘Horseplay’, detailing the murder of 18-year-old autistic student Steven Simpson. By heightening awareness, hopefully instances like these will not only be treated with the recognition they deserve but become fewer.

Janine boldly channels her intellect, fury and passion into each and every line of her writings; she explained that, for her, performing poetry was about, “Having something to say and finding a medium and a style in which you can say it.” After watching her perform I bought a signed copy of her latest anthology, ‘Fighting Tories, The Force Awakens’.

Mother of three, Station Manager for London Tubes, active trade unionist, and now the first Chair of the recently formed Neurodivergent Labour – a fantastic, and perhaps ground-breaking foothold for the ND movement. Not even COVID 19 has caused her to lose steam; she has been performing spoken word at FB Live and Zoom events additionally to publishing several articles on the effect of the epidemic on ND and disabled peoples: Covid 19 and Austerity: The Threat to Disabled People.

As a Neurodivergent person, scholar and journalist, I am thankful that there are dedicated, eloquent and unabashed ND women willing and able to thrust themselves into the heart of ND matters; together we can reach out, gain greater support, demand serious recognition, and steam out from the far end of the tunnel (both figuratively, and literally for Janine).

Just to say as a curator of poetry events who has worked with Janine, who i’m looking forward to working with again, that i’d recommend her to anyone. Her left thinking right on-ness is accessible and inclusive. One of the best on the circuit