Angela Edmonds: It would be good to start with a little background information about you and what led you to become an artist, if that’s ok with you?

Dominic Quagliozzi: Well, I live and work in Los Angeles. I started painting when I was fourteen, watching Bob Ross on PBS while I was in hospital. I would recreate the paintings he made, with oil paints and construction paper. Before that I was drawing all the time.

A.E I love that! I can see how that would have been comforting and inspiring to you as a young boy in hospital.

D.Q I started selling my paintings to the nurses. Then later when I was in college I decided to seriously pursue art as a career. I studied Sociology and Studio Art, infusing my work with lived experience and social issues around the medical world and patient experience. Then in 2012 I gained an M.F.A at California State Los Angeles, wanting to give myself the rigor to be more seriously involved and considered. I was listed for my double lung transplant while I was installing my graduate show! 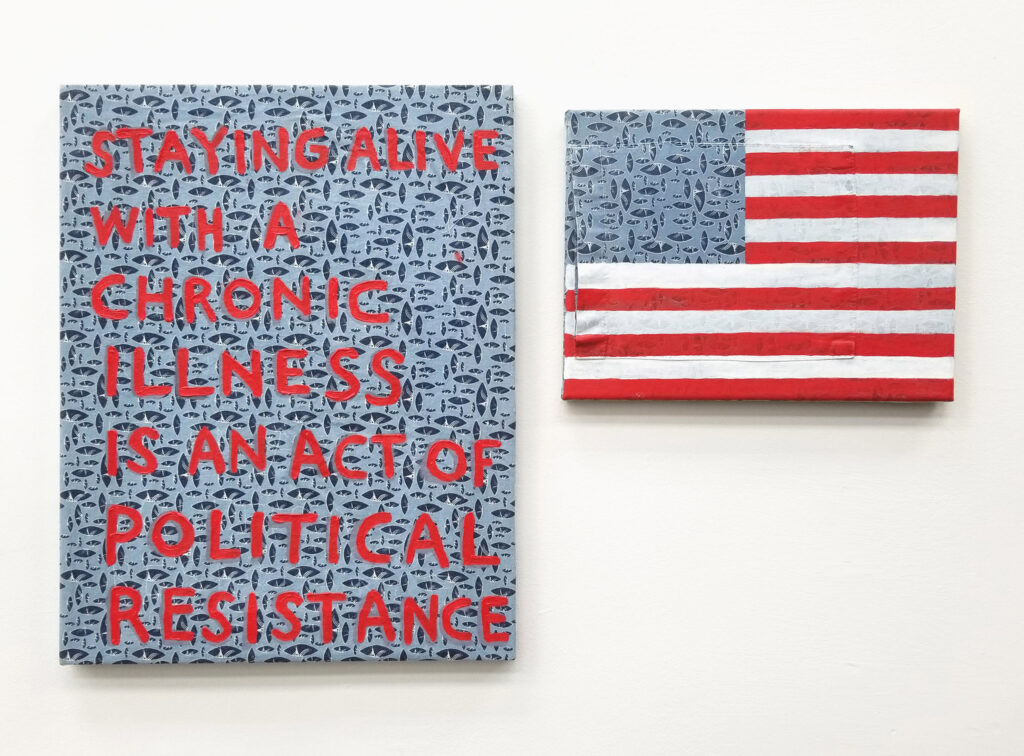 Staying Alive with a Chronic Illness is an Act of Resistance, 2017
Perilous Fight, 2017. Acrylic on hospital gown. Image Dominic Quagliozzi

A.E Several years ago your work often comprised text painted onto canvas, in small scale works not dissimilar in format to the work of the poet Rene Ricard. His texts are words from his poems whereas yours are more in terms of the body politic and your medical experiences?

D.Q I tend to use text when I want that directness. A lot of it comes from short phrases that stick in my thoughts. Things that I hear during hospitalizations, from doctors and nurses or talking to other patients. Some of those words resonate with me, almost like poetry. They stick together in some way that makes me want to share them. They are often contradictory terms or concepts but putting them together makes sense.

A.E It’s interesting that you should say that about things being contradictory. I see it as a kind of poetic inexactitude, bringing together disparate elements to create a third space for discourse.

D.Q Yes. For a while around 2010 to 2011 I was deeply affected by the notion of ‘estranged intimacy’ and I started making work on that concept.

A.E I get that. Hospital gowns, which you have used extensively in your work sum that up perfectly. Do you see the work as a protest or a crie de coeur ?

D.Q Some of both, and at times both. Most of my work comes from a place of chronic illness, the struggle for my body to get me through my life – I have to actively challenge societal impulses to ‘other’ me or that uphold ‘ableism’, and to challenge insitutions that marginalize differently functioning bodies.

A.E Yes. Following your double lung transplant in 2015 you seemed to dispense with text to make work soley from hospital gowns in transformational formats.

D.Q I work in congruent threads. So I’m often working on different bodies of work at the same time. The text works continue, even when I am making the hospital gowns work. I started playing with hospital gowns in 2010, along with other hospital specific materials. But in 2014 the hospital gown work became my primary subject matter after I survived a four day coma and acute lung failure. That was in 2014. 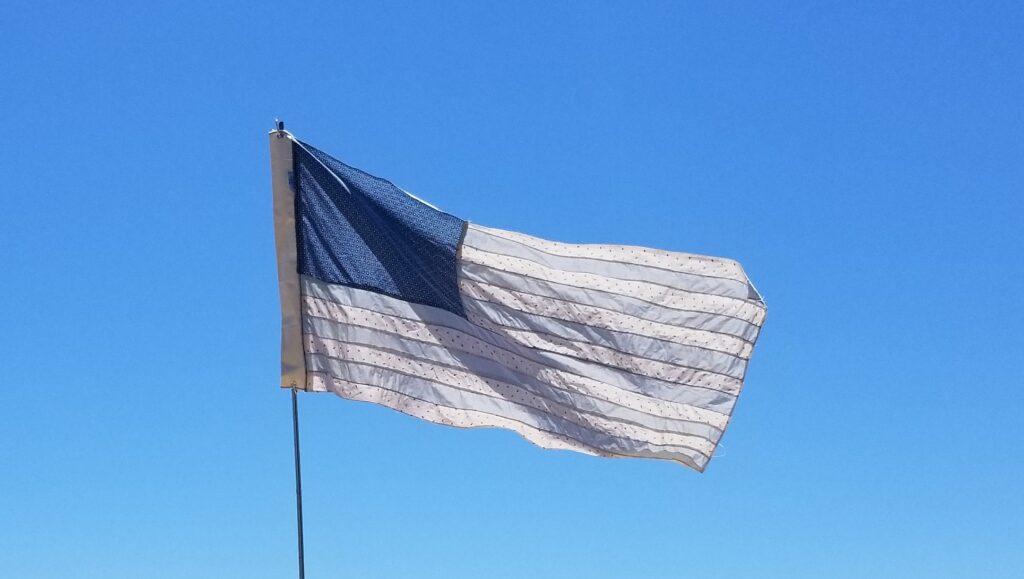 A.E I see. It would be good to discuss your more recent work of The American Flag made entirely from gowns. This work in particular has so much resonance now in this time of Covid and our vulnerabilities.

D.Q Yes, it certainly has. I made ‘Flag’ in the Fall of 2019 wanting to present the American Flag as a work symbolizing every American citizen being covered under Medicare. Thinking about uniting the country through universal Healthcare. Healthcare as a basic human right.

A.E Your flag looks pretty dystopian. I’m aware that there’s a law against defacing the Flag but that hasn’t stopped artists from appropriating it in their work. Jasper Johns said that the idea of using the Flag came to him in a dream, which I found quite funny. A cryptic comment on ‘The American Dream’.

A.E It has been suggested that the actual design of patients’ hospital gowns reinforces feelings of vulnerability and low status in the patient and there have been many different designs of gowns over the years trying to address these issues.

D.Q Yes, that’s one of the reasons that I use them often and in the way that I do. I play with the notion of vulnerability trying to turn it on its head or question how I feel as the patient in the gown.

A.E Then you made the suit! 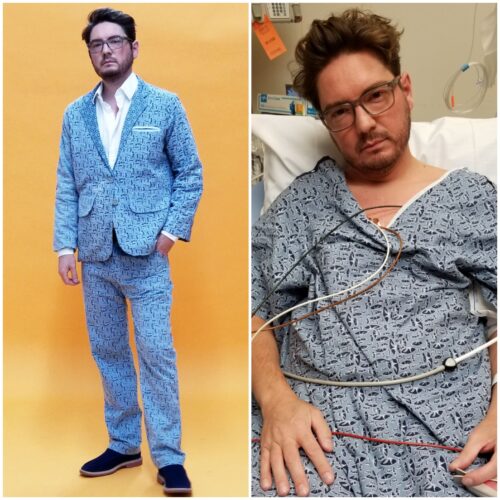 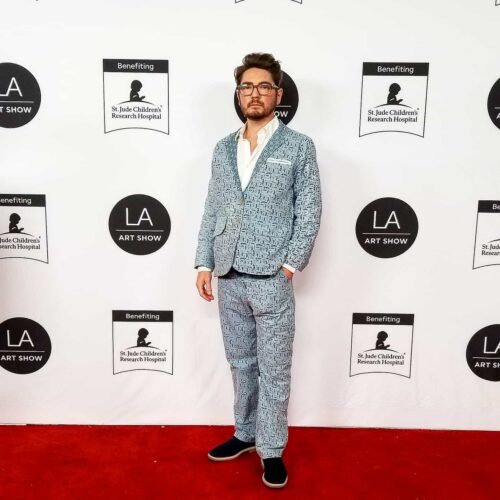 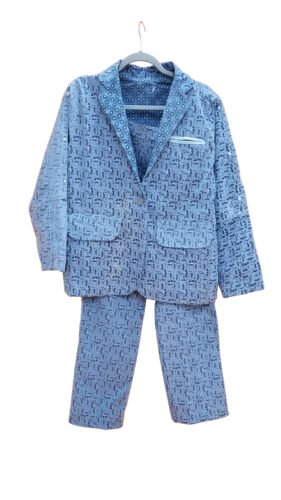 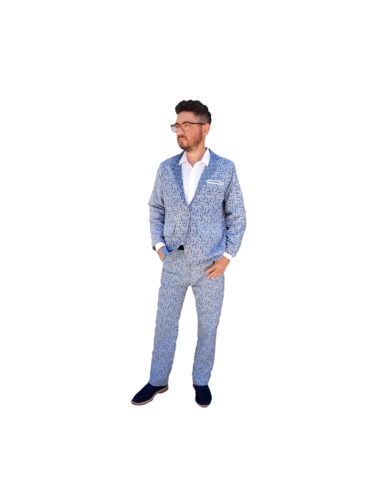 D.Q Yes! The suit deals with those issues, agency over vulnerability.

A.E A garment that bestows a certain status and dignity. How do you feel wearing it?

D.Q I feel powerful and engaged. Like I’m an expert in my own lived patient experience, and hopefully it’s a model of positivity for other medical pratitioners to see that and trust patients and value and honour their experiences.

A.E I think it’s a difficult thing to navigate. How do artists express these things without denigrating the nurses and doctors who save lives? Without respecting their experiences? It has to be more about communicating than criticising because it can alienate instead of encouraging discourse and empathy.

D.Q Yes you’re right; it’s more about communicating; more of a partnership. The patient, and doctor, nurse etc working as a team on equal terms rather than something with unbalanced power dynamics.

A.E It’s been interesting to see your work develop over the years. The suit is so positive. Some other recent works which you made in collaboration with your artist wife Deborah, also include freshly cut flowers. Less triumphant in tone than ‘Suit’, they are also less strident than some of your earlier work with gowns.

A.E I hadn’t thought of them like that. I had thought of flowers brought to hospital by visitors and also of decay.

D.Q Yes, it’s that too. Gestures of caring. But also decay.

A.E Signifiers of transience, and maybe the flowers were a female touch if I am allowed to conjecture that! Gowns as vases is interesting. They are both designed to be containers.

D.Q Deb and I talked about the work and wanted it to reflect the patient and caretaker relationship. Deb loves to arrange flowers and uses organic motifs in her own work as well as being a caretaker, so it worked. I like how the gowns are a symbol of someone being looked after and supported, in a vase like way, but despite this simbiotic relationship, without water, the flowers soon wilt and wither away. They are only beautiful together for a short time. 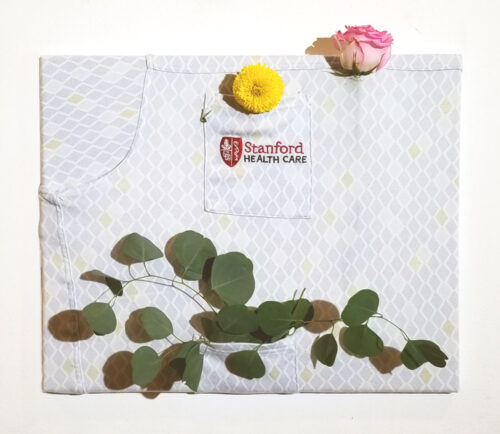 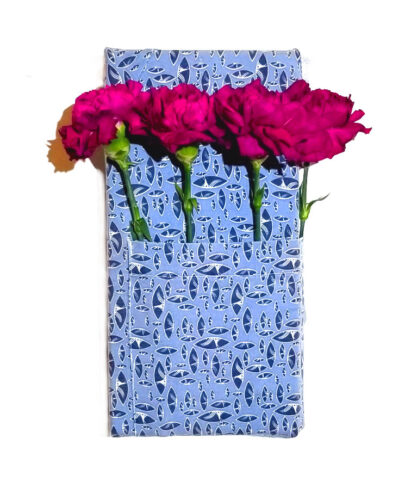 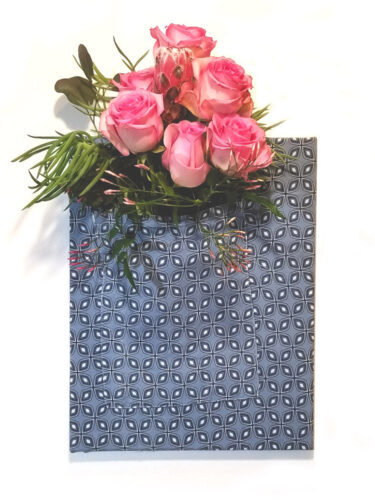 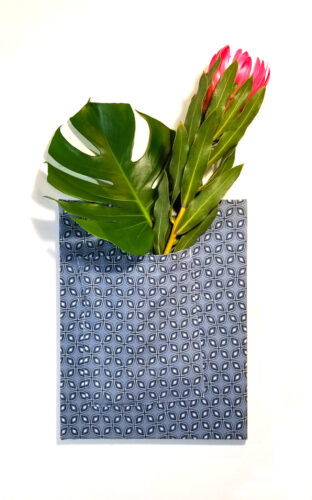 A.E The flowers are very vulnerable.

D.Q Like in my earlier gown work, there’s that implication of vulnerability that gowns impose.

A.E Very much, but this series has a quiet pathos, a more philosophical mood. There is a gentle melancholy more than any sense of anger and as in a lot of your work there’s a striking and direct synthesis.

D.Q Well, I reached my coin toss this year as there’s a 50% survival rate after five years of recieving a double lung transplant. I feel very lucky.

A very interesting and informative interview. I wasn’t aware of Dominic’s work before but find it very compelling. Angela asks thoughtful and insightful questions of her interviewees – more please.