In his latest television documentary disabled artist and film-maker Richard Butchins investigates whether good vision equals great art and looks at modern and historical artists through the lens of their impaired vision. Review by Alison Wilde 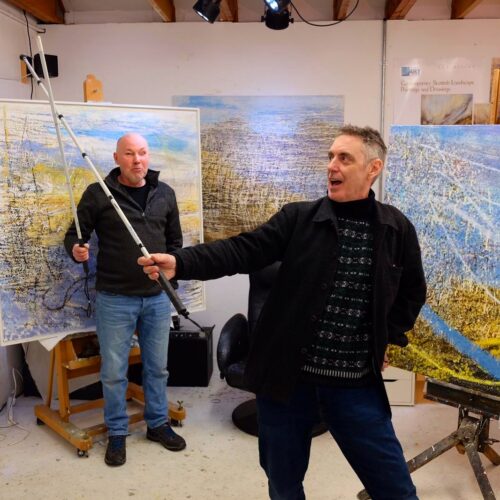 It was a delight to watch Richard Butchins’ latest documentary programme for BBC4. Like his previous examination on Dwarfs in Art, this programme has a broad-based appeal to all viewers; once again, he has skillfully orchestrated a wide range of themes, images, and people, to help us learn much more about the role of impairment in the creation of art, asking a variety of important questions along the way.

This time the emphasis is placed on artists with visual impairments, and their creative practice, rather than examining portrayals of people with visual impairment in art. However, it is testament to Butchins’ talents in storytelling that we are likely to be left with questions about the impoverishment of art without the contributions of artists with ‘disordered eyes’.

Personally, even as someone (with occasionally disordered eyes) who is very critical of what passes as ‘normal’, and who has had the benefit of discussing the work of artists with visual impairments with Raina Haig (and seeing her excellent work on film), I went away from this documentary with a far more critical perspective on visual art and the ways  in which our expectations are founded on assumptions of the ‘ordered eye’.

Butchins examines the work of both current and historical artists with visual impairments. including Keith Salmon, Aaron McPeake, Sargy Mann, as well as Degas and Monet. He positions these inquiries into the working lives of artists carefully, rather than directing us to conclusions that art by artists with visual impairments is better, worse, or special. More than that and almost by sleight of hand, Butchins weaves the stories of visual artists that most of us will be familiar with amongst the lives and practice of contemporary artists. This means that we come away from the programme knowing  that the canon of mainstream visual artists is replete with artists who had visual impairments. That, in itself, is a crucial move forwards, telling us much more about disabled people’s participation in the arts then the previous documentary was able to do. He manages the curiosity of viewers adroitly, acknowledging that many of us want to know how it is possible for someone with little sight to create visual art.

As suggested the synthesis of well-known artists of the past with contemporary artists really brought life to the documentary, giving us valuable insights into the ways in which artists work with their visual capacities, artistic aims, and their changing circumstances. A variety of jaded old tropes were shot down along the way including those deficit-led beliefs surrounding the loss of hearing and sight. The sculptor Aaron McPeake, for example, tells us how people assume his interest in sculpture and sound is not because he has lost his vision but because of his interests in the sounds metals produce and in listening per se; as he says  ‘we’re taught to look but we’re not taught to listen’.

The initial focus on painting raised the issue of colour perception, and the understanding that it is a construction in the mind rather than an objective property of the world. Usually, as examples such as Monet demonstrated, it is the deterioration of the eye that affects the material the brain is given to work with and so affects the perception of colour. The significance of the brain in this process was made clear in Butchins’ interview with Neil Harbisson, the first officially recognized cyborg/cyborg artist – and activist for transpecies rights. While his eyes function ‘as normal’, his brain is unable to process the information in the usual way and consequently he sees only in black and white. To add another dimension to his experience of the world, he has an antenna implanted and osseo-integrated into his head, an ‘eyeborg’ which allows him to listen to colour; this and other aspects of Harbisson’s work offer a profound challenge to perceptions of reality. Overall, the programme provides a stimulating  array of artists and art which act as handy jumping-off point for further exploration, e.g. Harbisson’s Ted Talk (I advise you to watch the documentary before you listen to this).

Another segment I found particularly compelling was the foray onto the work of Robert Morris. As a prominent non-disabled artist who had a great curiosity for the way that people with visual impairments create and experience art, we gain a salutary reminder of just how easily disabled people are exploited, marginalized, disempowered and ‘vanished’ in these processes.

Butchins pulls no punches here, showing how Morris’s ‘abject failure’ in understanding disability was no impairment to his artistic success, even while he marginalized the actual (though anonymous) blind woman he initially worked with, and whose contribution to his art was largely disregarded. I was shocked to find out who this person was. Anonymized and erased as his collaborator she went on to become a key pioneer in Disability Studies, one who had a great influence on mine and many other disabled people’s lives. I was thrilled to see that this erasure, of yet another disabled woman’s talent, was taken forward in Butchins’ rallying call to position disabled people as protagonists.

The arts world has been dominated by white men, and it was a shame there wasn’t sufficient time to feature more women in the documentary. Women are frequently marginalized in art history (and history generally). It is true to say that women artists with visual impairments do not have as much fame as artists such as Monet, but they are certainly there, including Georgia O’Keeffe, Mary Cassatt, and Josee Andrei. Like all the artists featured, they too continued to create art after their eyesight changed.

Similar issues arise regarding the class background and race/ethnicity of artists – most of those featured had lost visual acuity over time, and were already successful, so allowing them opportunities to adapt their working practice to continue to produce works. Whether the terrain could be so successfully negotiated by lesser-known artists is open to question, especially with contemporary biases towards those deemed with more valuable cultural capital. This has been exacerbated with attacks on arts education, the impoverishment of many disabled people through government cuts, and now the pandemic.

Equally, this applies to a group the programme barely touched on, those ‘born blind’. Indeed, some of the deepest prejudices which people with visual impairments have faced are embedded in beliefs about ‘blindness’; as the documentary mentions, this is a group of people who have fascinated philosophers who have theorized consciousness, generating ideas which have fed directly into historical and contemporary understandings of people with visual impairments, having significant impacts on the ways they are treated by society.

Indeed, just as people may start viewing this documentary with the belief that people with visual impairments cannot make visual art, there may be residual doubts as to whether those who are visually impaired from birth have the talent and imagination to produce it either, especially as many of those discussed, or speaking, in this account seemed to rely, to some extent on memory. An examination of the work of those who have been blind for their entire lives, such as Esref Armagan  (for example) can be seen to ‘challenge centuries of beliefs about colour’.

Overall, given the limited time available, this is a valuable, informative and insightful work. I hope that this second programme on art and impairment signals that we can expect more documentaries of this type. Butchins has shown again that much can be done to vanquish ideas and stereotypes which serve none of us, by recognizing our talents, needs and creative views of the world.

really enjoyed the programme and this review of it.

Really inciteful and useful have shared with my colleague ophthalmolgists