Rhi Lloyd-Williams’ one woman play, The Duck, aired on 7th of March at the Theatre Deli, Sheffield. It details the trials and tribulations, thrills and sensitivities of experiencing life as an autistic woman. The play, in part autobiographical, depicts how Rhi Lloyd-Williams identifies as autistic; highlighting social-political challenges, injustices and nuances. Produced by Autact Theatre CIC, an autistic-led theatre company, ‘The Duck’ can be viewed as an encouraging, accurate and ultimately human interpretation of feminine spectrum-hood. Review by Emma Robdale. 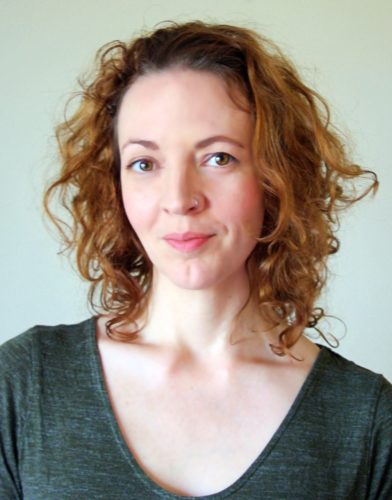 Rhiannon Lloyd-Williams was given an autism diagnosis in her mid-30’s, but throughout her life she’d worked with and alongside autistic individuals… She wondered why it’d taken her so long to recognise herself as autistic.

Damning (and inaccurate) stigmas surrounding autism have being so prominent, that she had herself internalized many, which inhibited her own identification. She believes that if more women are able to positively connect with autism, they may gain better understandings to how to nurture emotional health needs… thus avoiding exhaustion/shutdown/meltdown. This is one of the reasons she wrote ‘The Duck’, to boost genuine representation:

“All I want is for NT people to listen and challenge their internal stereotypes. And for AS individuals to know they’re not alone.”

Since identifying as autistic she’s wasted no time; longlisted in 2018 for her essay collection ‘The Wrong Kind of Happiness’, on the topic of finding happiness in a non-autistic world. Last year she was also writer in residence for Neither Use Nor Ornament (NUNO), a project bringing together the work of both autistic and non-autistic artists. Always clutching a handful of string within her pocket for inspiration, she’s now produced her first play, ‘The Duck’.

“Water does not slide off my back, I am not a sitting duck… I do not take to things like a duck to water.” 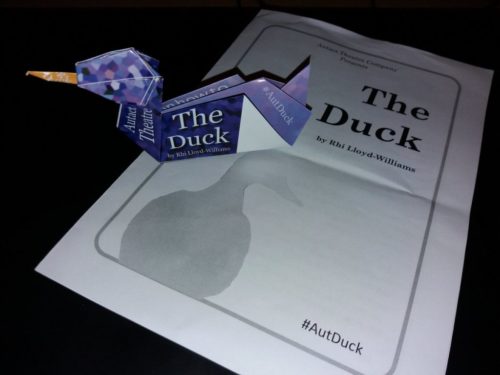 Rhiannon had conducted many speeches about being a woman on the spectrum, but she wanted to portray her experiences more artistically. But why ‘The Duck’? For her the analogy portrayed an image of appearing still on the surface, while frantically paddling beneath. A duck also has a smile set into its beak, regardless of whether it is happy, sad, anxious, or even grieving… the play questions if this is indeed a real smile at all? Concluding that, if it appears as a smile to ‘non-ducks’, does it matter…
Autistic individuals understand that this type of ‘smiling’ will take a toll upon mental health; the play expands upon experiences of ‘masking’… an everyday performance many autistic women feel the need to keep up to fit in. The play passionately describes how society should not expect ducks to transition into swans; it’s time to respect ducks.

Having intermingled with neurotypical peers who do not find the same situations distressing, Rhi spoke on how she used ‘masking’ to hide pain and fear; leaning to suppress her own feelings and natural responses to being overwhelmed, ‘I hear all nose together, at once… all as important as the next!” In order for her to determine herself, physiologically, when she felt panic, she bought a fitbit to track her heartrate, “At least six times a day it shot up to 150!”. Though her body obviously responded, people surrounding her were clueless to her true emotions. This type of instinctive ‘covering’ prevents many autistics individuals from seeking or obtaining help. Rhi described the ‘mask’ she used in a previous workplace as so ‘thick and calculated’, that she referred to herself in the third person,

“She had long blond hair, she watched Coronation Street to make small talk, and she was aware of precisely what she said and didn’t say.” 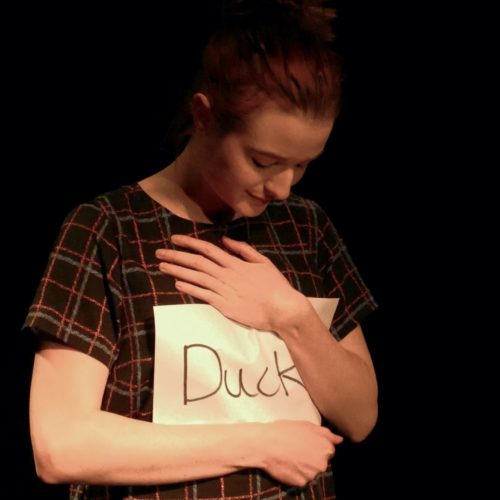 Actor, Lucy Theobald, holding the label ‘Duck’ during its performance.

Rhi’s play, ‘The Duck’, was performed upon an empty square stage with simple lighting, using just a chair and a sheet as props. The focus is entirely upon the actress: her energies, anger, scepticism and terror. Rhi wanted the performance space to be ‘uncluttered’, with no over-lapping sounds, as she thought it to be unnecessary and overstimulating for the performance. But at one point a magic flow bracelet (see picture) is used for the actress to ‘stim’ (often a repetitive action many autistic people use to decompress/relax). Rhi described how she’d wanted to portray ‘stimming’, which is often misunderstood, as something enjoyable and even beautiful. As the woman in the play spoke, the bracelet shined, shimmied and rolled over itself in the light.

The actor also held-up labels reading, ‘Duck’ and ‘Autistic’ at points; Rhi expanded that this demonstrated how autistic people can own and take charge of labels; they carry these qualities with them, but they can be made to appear offensive/negative when neurotypical society takes ownership.

The play is honest, frank and cutting; however, phrases are often intermingled with metaphors and description that befits poetry. This was hardly surprising when I learned that Rhi was first and foremostly a poet; at the bar I purchased a copy of, ‘The Duck, and Other Poems’, her latest anthology. It is self-described as, ‘a love poem about a play’. And afterwards, I had mine signed, “For Emma, a marvellous audience member.”

As an neurodiverse (dyslexic) individual I related unequivocally to sections of the play’s narrative; it was so on the nose (or bill!), that I had to take measures to stop my own anxieties from escalating along with the actresses. Rhi reflected upon how she has interpreted the world’s stressors, vividness, complexity and cruelty; truthfully detailing occurrences such as sensory over-stimulation and isolation. She commented on how her experimentation with words helped put-forth these sentiments,

“Sometimes it is in playing with language and movement that we end up finding our most profound forms of communication and connection.”

The performance projected a level of resentment and anger, denoting its attention towards NT audiences and stigmas that Rhi must have personally faced. One scene was directed upon how NT people have reacted upon discovering she is autistic… “I think we’re all a bit autistic…”, “it must only be mild”. And it is this type of reaction that she is now battling against,

“I don’t have duckishness… I am a duck.”

The play illuminates how she has attempted to mimic and comprehend neurotypical/ ‘non-autistic’ behaviour, but how rarely she has felt understood in return… and when they did compromise, she has so often been met with judgmental responses; “Why is she being like that!”

One verse from her poem, The Duck, explores how Rhi’s dedicated of a huge proportion of her life-energies to fixating upon neurotypical society, attempting to fully understand them… because everyone should want to gain an appreciation of the people they know and love.

What if instead of loving the stars and the planets
And the swivel of physics through the spheres,
What if instead you fell in love with people
And mirroring is how you spent those years?

Unlike many, who shy away from disclosure, Rhi poetically bulldozes through neurotypical preconceptions, forcing them to accept autism as part and parcel of her personality. Having autistic role-models like Rhi, who can be seen, heard and admired for their work, enables other people on the spectrum to gain confidence and become more accepting towards their own identities: “If you can’t see it… how can you be it?”

During the question and answer session, actor Lucy Theobald, revealed how she was dyspraxic. She detailed how being neurodivergent had helped her relate to the roll. Neurological variation such as dyslexia, dyspraxia, ADHD have many overlaps, and many people now identify more with the word ‘neurodivergent’ than specific diagnosis. She felt she brought some true insight and used stims which made her feel more comfortable on stage, rather than taking direction or copying Rhi’s.

Regarding her own working/writing style Rhi commented, “I enjoy shutting myself away, working alone, decompressing.” However, within the Q and A she detailed a recent experience of ‘autistic compromise’; she personally doesn’t like or appreciate hugs, and her mum knows this. But, on seeing her mum upset, she determined that her mum needed a hug, more than she disliked hugging. Neurodiverse/ autistic people navigate the world with all its complexities, but only now has the world begun to have an appreciation of theirs too.

Rhi has also posed a new concept regarding accommodations for ND/ autistic audiences; she’s coined this as ‘considerate performance’. After establishing that both she and other ND/ autistic adults felt uncomfortable, hence did not attend ‘relaxed performances’ (performances where pacing, moving around, speaking and noise is accepted), but still feel anxious within ‘ordinary’ settings. She described ‘considerate performance’ as being sensitive to quiet stims, and that it should be well-accepted that people may feel the need to leave and re-enter; but within the realms of being ‘considerate’ to others who may be easily distracted or overwhelmed by sudden movements/noise. It is important to stress that Rhi does not advocate ‘considerate performance’ over ‘relaxed performance’; but believes there needs to be more appreciation of the diverse needs of ND/ autistic communities… not a ‘one boot fits all’ approach.

One audience member said ‘The Duck’ had highlighted real topics that resonated for them. Slurping (quietly) on a very small (but expensive) cocktail, I ‘braved up’ and posed my own question,

Her answer: maybe not when she was younger… because harmful stigmas came with labelling and it may have risked greater prejudice rather than understanding. But, she confirmed, that if she were a child today…. she’d like to be recognised as autistic; believing that people now know and respect autism far better; the climate is changing. And I truly and wholeheartedly hope she’s right. One thing is for certain, ‘The Duck’ will help neurotypical society waddle in the right direction….

The Duck is hopeful, the Duck is love-filled,
The Duck is deeply misunderstood,
Once upon a time she hid her Duck face,
But now her beak is back for good!

Poetic and political, the play pushed past binary stereotypes and ‘othering’. I stood to applaud. For anyone who is tickled (unless they hate tickling) to experience ‘The Duck’ for themselves… you’ll be glad to know it’s (hopefully) flying to Edinburgh Fringe later this year! And, in light of this sudden viral epidemic, Rhi has chosen to record an audible version of the play, making it accessible for people who require entertainment and support.

Purchase (or, if low on cash, listen for free) to ‘The Duck’ on the Autact Theatre website
Read Rhi’s experiences from the ‘duck’s mouth’ from her blog: AutistRhi.com

This is such a well written review! Sounds like it really resonated with you, I’m so glad there’s a version I can listen to from home!

A very interesting article. I like the duck analogy. A duck is a duck and should be respected in its own right. They never will nor ever want to be a swan. We can blame Hans Christian Andersen for that analogy.