In the second of commissioned responses to The Festival of Minds and Bodies at the Wellcome Collection, London, Alison Wilde reflects on the screening of Who Cares? a short film about caring, by Catherine Long, Felipe Pagani and Charles Stuart. 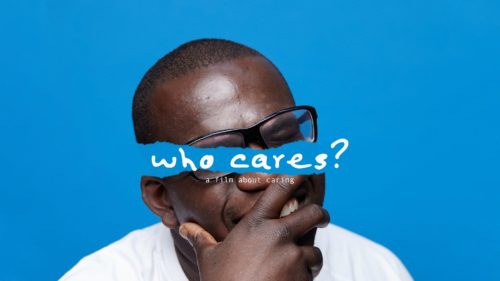 On Saturday 30th November I went along to the Festival of Minds and Bodies at the Wellcome Collection, and I had the absolute pleasure of seeing this wonderful film. I have chosen that word carefully – it is wonderful in the aesthetic sense but even more so in the stories it presents, in that the majority of the words we hear tell of relationships that work, of care and learning gained on both sides of the support relationship, and of reciprocity, and of mutual regard. Catherine Long (artist/director) and her collaborators, Felipe Pagani (visuals) and Charles Stuart (music) have created an exquisite picture of ‘care-full places’, (to borrow from Chrissie Rogers’ academic writing on care-less spaces) but, importantly, it is a glimpse of life that is embedded firmly in, and directed by, the lives of those with learning disabilities and autism and their relationships with their support workers.

This is a film which is undeniably positive in its depiction of relationships between disabled people and support workers, but it doesn’t avoid more difficult questions about the desire for independence. To some extent this is due to the harsh reality that the contributors who were involved were people who can get out to attend ‘Allsorts’ Heart’n’Soul’s creative taking part day for adults.

This is possible because most of their care packages still allow them to do so, or they rely on support from family/friends. It is visually striking, with all the contributors’ faces shown close-up, featuring ongoing clips from the participants describing their experiences. The overall impact of these conversations provides the audience with an intimate sense of the connections and divisions between disabled and non-disabled people, subtly posing questions about what the rules of caring are, illustrating the ways in which we respect or transgress them.

Although I am sure we all had our doubts about the ‘care’ in care systems before we saw the film, the film seems to shift us into asking our own questions about the value society places on care and support. It doesn’t preach at all. The contributors help us to consider the mutual benefits and disadvantages on both sides of the support relationship, and we gain a strong reminder of how much non-disabled people gain from support and ‘care’ work, and from disabled people. The value of independence is clear, in or out of a support-based relationship. I suddenly found myself on the verge of tears, as I realized how inured I had become to the culture of ‘care-less’ spaces, the ones I had grown weary of fighting against in vain, for so many years, for my sister.

Critics might suggest that, given the prevalence of inadequate or brutal forms of ‘care’, or worse, that this film doesn’t capture the reality we need to see. I would say the opposite; this is EXACTLY what we need to see. I had forgotten that relationships like this were possible (and my experiences of working in the sector had made me pessimistic about the conditions of possibility for support staff to work with learning disabled and autistic people creatively and care-fully). I think this film should be shown widely, especially to those who train people and who manage care and support organisations (who often seem to see support as little more than a technical exercise at best).

In accordance with the ethics of producing this film and the event it was shown at, I also want to highlight and praise the work of the collaborators – it was clear that this was a great team effort, from visuals, editing, music and so on. Audio description was available, with the voices of everyone in the film; they chose how to describe themselves and made the decisions what information felt valuable for them to share. Two of the contributors, Michael Prempeh, and his support worker Peter Mensah were on the panel for the post-film discussion, which added a great deal to the lively discussion which ensued.

As I said, a wonderful film. See it if you can.

Given the Tories election manifesto pledge to completely remove all Government funding for learning disability and Autism in 2023 – this film becomes even more vital as a resource for evaluating and valuing the meaning of ‘care’.