JOY is a disability strand to the annual Hammersmith & Fulham Arts Festival produced by Turtle Key Arts in partnership with the Lyric Hammersmith. Wendy Young went along on 5th June.

Performance is a joy for the performer – even though it can be a nerve-wracking, laxative causing bundle of panic, but all that disappears if you’re ‘in it’ – hence it is a joy for the audience. So breathe, lubricate the vocals, project and inject. 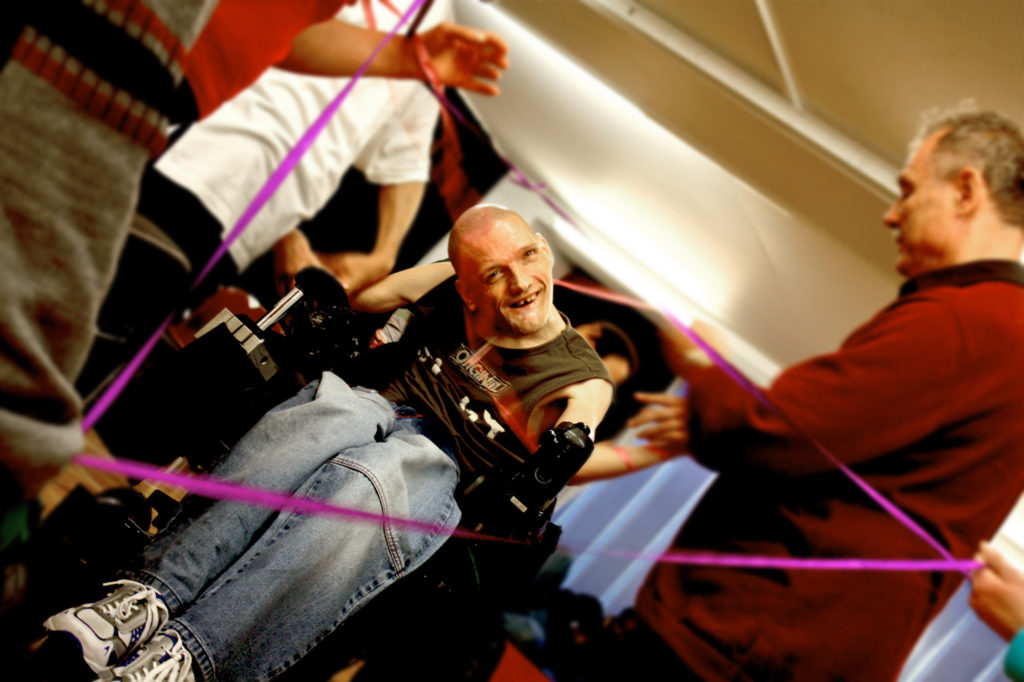 Wolfgang Stange, Director of Amici Dance Theatre Company started the evening off with an open workshop with around 20-25 disabled and non-disabled performers in The Lyric Studio. Open really meant open as members of the audience were also invited to take part in workshopping – for instance by shouting our names out as part of a game so that everyone in the room had named themselves.

The Amici performers showed us how nothing is exclusive and how inclusion can make life a happier experience. Throwing caution to the wind and dancing freely, clapping and moving to all types of music – Opera, Classical, Oompah, African, Arabic, Jungle was a sensory manoeuvre. Being a fan of electro music I was pleased to see that the piece they used to improvise the scene ‘Human Machine’ evoked a spark of electricity (our very own Richard Downes was coerced into that one).

Small breaks were taken to loosen the neck and shoulders – Wolfgang taking great care of his group! A beautiful moment when, to a female aria, another improvised piece comprising a number of couples on stage moved almost unwittingly into trios – people, music, solace in harmony. There was an Eisenstein moment when the music (could have been Stravinsky or Bartok) evoked panic. I found that slightly uncomfortable and scary, but nothing’s perfect! Amici will be celebrating 40 years in 2020. 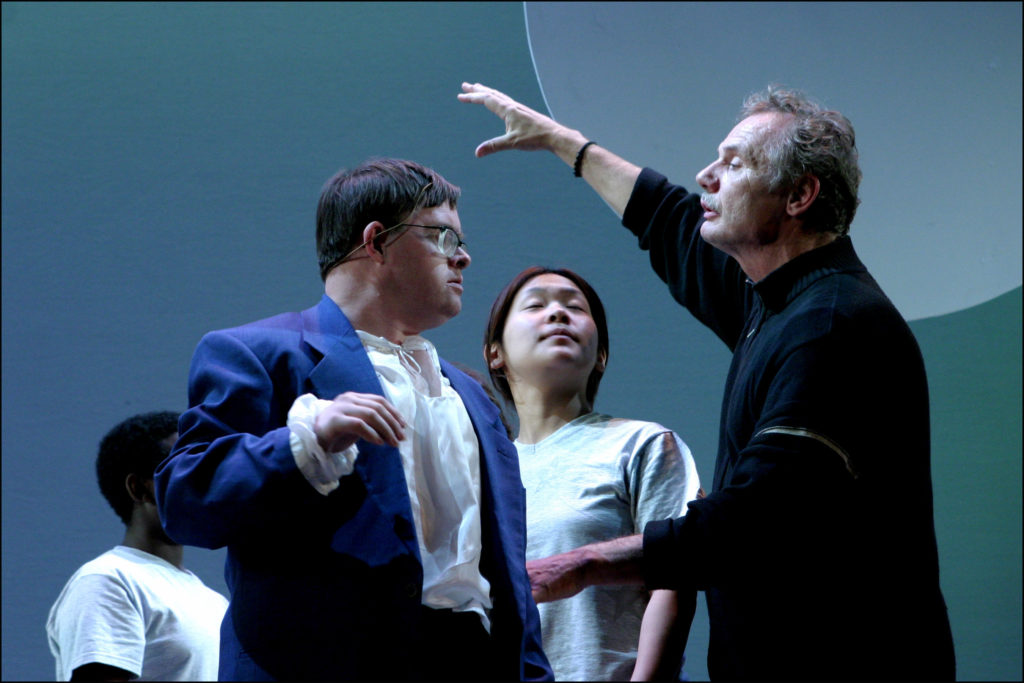 Next up the West London College Performing Arts Course students devised their own piece ‘A Year in the Life of a College Student’ to let us know the ups and downs of student life. The studio was in darkness except for blue lighting on the bodies on stage. As the videos of interviews of students and the Head Susan Jenkins played out on the screen above, I was a bit worried they’d actually do some method acting and fall asleep in their makeshift beds!

My worries unfounded, the kids sprang up and acted out issues like cyber bullying, making friends, gender, sexuality and anxiety at starting with the ‘new face’ they had to wear at College (some mask theatre here) but in the end everyone’s included and most importantly, allowed to be themselves.

To close the evening DAO blogger and disabled activist Richard Downes came on with REaD Rhymes. Wake up and smell the coffee mornings – Rich D eats his cake … anyway he likes it! It was wonderful to look down from the back of this prestigious studio and see Richard walk on in his inimitable style – a modest slink in red T-shirt and hessian bag and introduce himself as a poet with a stammer.

Since I met Richard Downes at Daisyfest a couple of years ago he has progressed to becoming a Performance Poet! He may have a stammer but Rich hammered home the importance of disabled people having a voice and this led into a series of poems with hip shooting content as well as humour and sharp intellectual wit.

Works like ‘Interference’ – his poetic polemic at ‘cake’ mornings – ‘pathetic status quo charities’ made us giggle like naughty kids. ‘Martin’ a tale of two people with the same disability who are also completely different people – surprise surprise!!

DWP – the Department of What and Pardon – (to me now his doo wop poem) has a good dig at the sorry state we all know to be the DWP and it’s bastard Universal Credit and ‘Keep Clear’ (Rich, Jean and the audience) could be the Disabled Anthem!

It was a varied performance. At times it was hard to hear when the introduction stopped and the poem began (I have been told I am guilty of this so maybe great minds …) Saul’s Box was about a homeless man and expressed deep pain but I didn’t manage to catch every word.

Moreover, nerves could have caused distorted words but to repeat the cliché – nothing’s perfect (unlike the Shell in Richard’s final poem) and he produced a real, genuinely heartfelt performance!

To find out more about JOY go to http://www.hf-artsfest-joy.org.uk