Angela Edmonds talks to watercolourist Roger Alsop about his lifelong passion for painting. 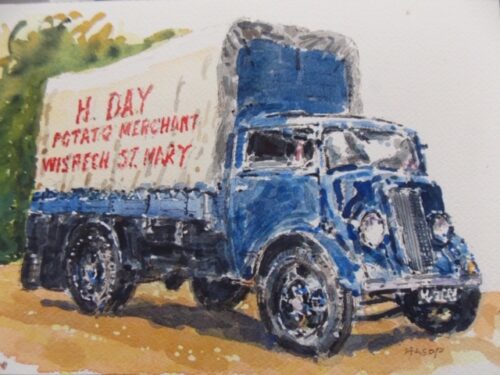 You may not have heard of Roger Alsop, but he has been a dedicated artist since the 1960’s when he first left his family home in Wisbech to study at Cambridge College of Art. Growing up in the Fens surrounded by agricultural industry Roger developed a lifelong love of trucks. It was a passion that soon became evident in his work, leading to many commissions and collectors of his watercolour paintings of trucks and vintage cars.

Moving to London soon after completing his studies Rogers’ early life in Wisbech had nevertheless imbued him with a strong sense of history and place, a love of wide open spaces and light. Alongside his commercial work he always painted landscapes, regularly travelling across Europe on painting trips, particularly seeking out places of historic significance, and always painting en plein air using delicate mark making to convey form and light. For Roger the outdoors has always been his studio and his work has always been on a modest scale, and mainly painted in one sitting.

These paintings are unashamedly topographical showing an affinity to Ruskin, himself the founder of Cambridge College of Art, who believed that the job of the artist was to paint reality. The works that Roger admired were the landscape paintings of Hogarth and Rubens, Jacob van Ruisdael and Meindent Hobbena, a  far cry from developments in minimalism, conceptual art or abstraction in which he admitted having little interest. 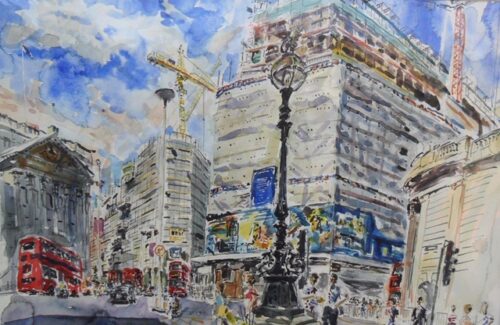 The Bank of England, London by Roger Alsop. Watercolour on Paper 1999 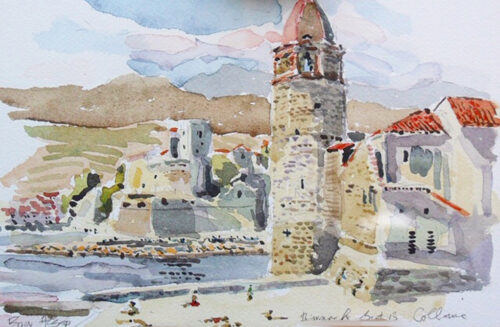 Roger’s artistic trajectory seemed set but over the years he developed a certain freedom and relaxation of mark making, his work becoming more expressive yet always structured and figurative whether painted in London or abroad. 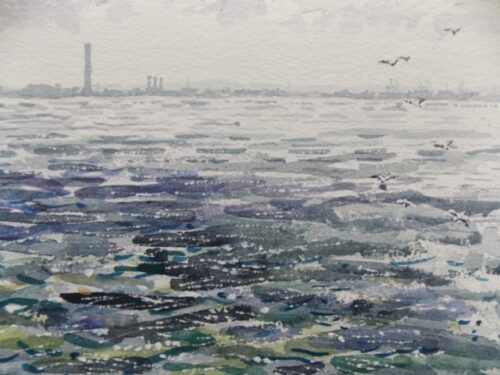 From Southend Pier by Roger Alsop. Watercolour on Paper 2014

In 2015 Roger exhibited 20 paintings from a new series of watercolours depicting The Thames Estuary viewed from Southend Pier. The paintings captured the changing light, sea and sky at different times of day. These were shown in a solo show at The Forum Gallery, Southend, and seemed to signal a growing interest in a more abstract, minimal vision with a limited palette, a chance for Roger to explore his love of light and wide open spaces.

As Roger himself said  “I found beauty on Southend Pier.”  I asked Roger if there were any artists who were relevant to this series of  paintings. He said “No, I use simple techniques and let them be themselves. Paintings have to be seen as they are. To name influences is a bit reductive.” Roger Alsop is a man who has always known his own mind. At least he thought he did. Then something happened. In 2015 Roger suffered a major stroke. He was confined to hospital for three months and then spent a further three months in a care home, where he was the only resident who didn’t have dementia.

Unable to negotiate the stairs at his lodgings Roger was eventually rehoused in a ground floor flat in Islington and complications with the move resulted in him losing a great many of his  paintings and possessions. Roger had to learn to walk again but he never gave up thoughts of painting. His desire to paint was so strong that he scribbled on the back of the meal menus in the Hospital.

Recovery was long and slow. Eventually he was able to venture out near to where he now lives in North London and for the first time he noticed the many flowers growing in London and wanted to paint them despite never having painted flowers before. These paintings took on a life of their own, they were small in scale but fluid and full of energy. 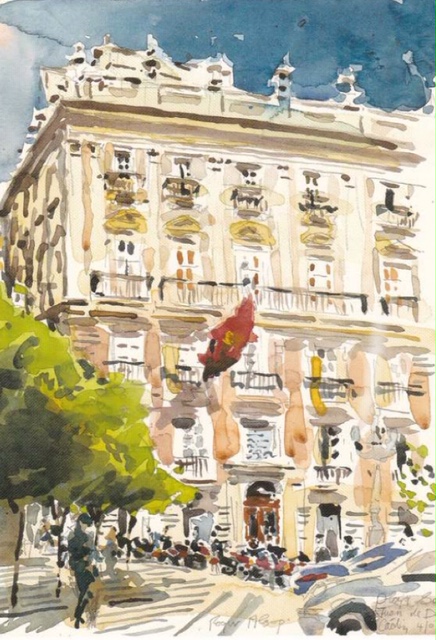 Roger began looking at the work of artists such as John Hoyland with a newly discovered enthusiasm which surprised even himself. Throughout art history most flower paintings were done by men. I asked Roger ‘Why would a man paint flowers? And he said “because they love colour.”  Roger Alsop paints flowers for their colourful and joyful impact rather than for their structure or symbolic meaning. Starting over following his stroke gave Roger a fresh vision and a way of painting which has blossomed and shown the power of art to enrich life and aid recovery. He told me “I can’t believe I am painting like this.”

Matisse famously said “Perhaps I owe it to flowers that I became a painter”. Similarly Roger remarked: “I opened my bedroom blind at eight in the morning. The sun highlighted snowdrops and campions and I suddenly saw how beautiful they were. I did a painting then and there. I realized that I had fallen in love with flowers (in my seventieth decade).” 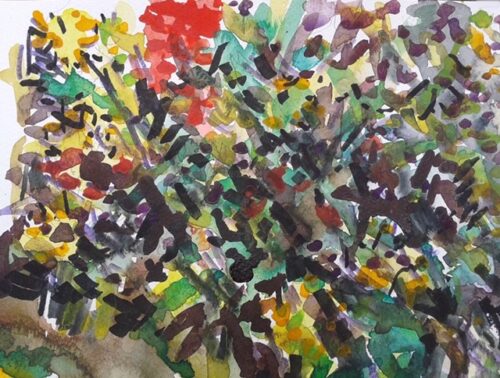 Yellow Daisies and Geraniums by Roger Alsop. Watercolour and Pen on Paper 2017

Roses on Sussex Way by Roger Alsop. Watercolour and Pencil on Paper 2020 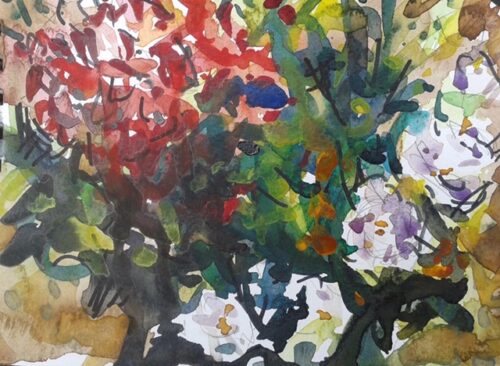 Red and White Geraniums by Roger Alsop. Watercolour and Pen on Paper 2017 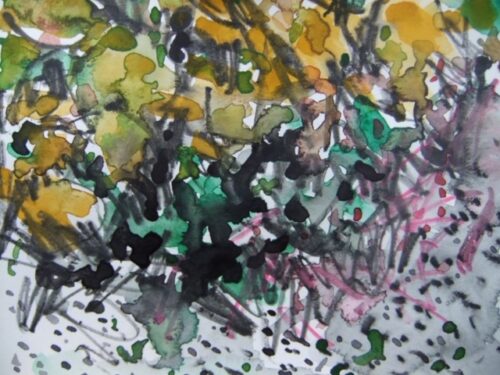 Oxalis From The Back Door by Roger Alsop. Watercolour and Pencil on Paper 2020 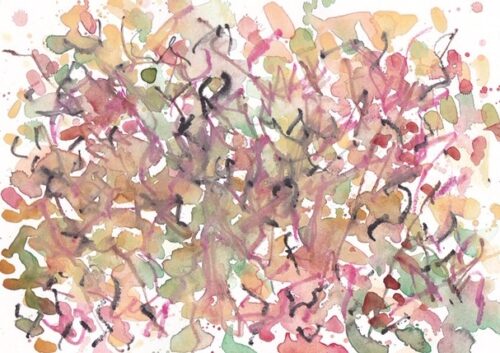 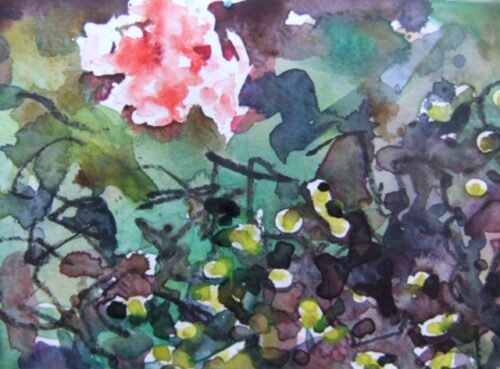 Geraniums and Oxalis by Roger Alsop. Watercolour and Ink on Paper 2020 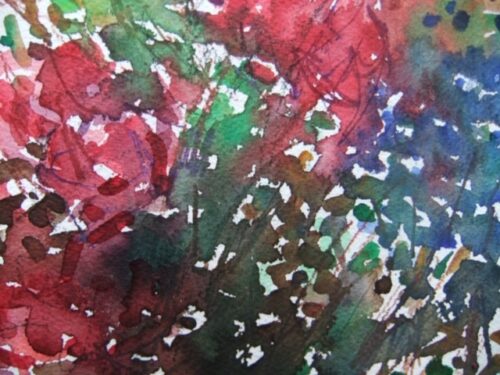 Geraniums and Hyacinths in Hornsey Road by Roger Alsop. Watercolour and Pen on Paper 2020 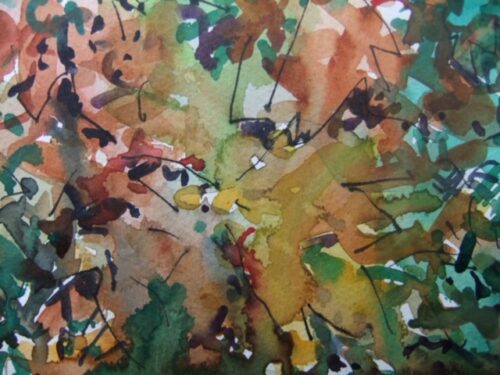 Fallen Leaves by Roger Alsop. Watercolour and Pen on Paper 2018 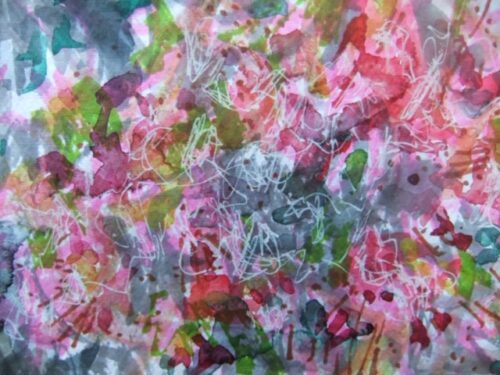 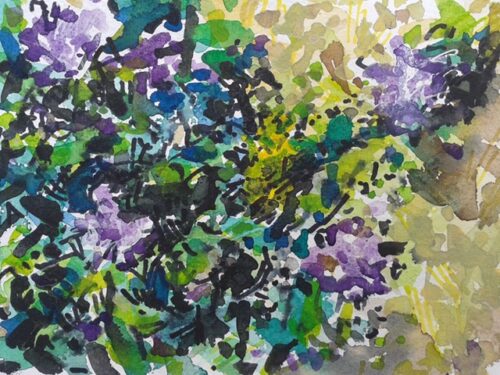 Campions Just Round The Corner by Roger Alsop. Watercolour and Pen on Paper 2017

Painting flowers after his stroke inspired Roger to embrace change and rediscover the joy of painting and colour in works that have become increasingly intuitive and fluid; a way to start afresh as an artist. His many flower paintings have yet to be exhibited but how joyful they would look exhibited hung closely together  as ‘a piece’  in a similar way to the work of Marianne North in The Gallery at Kew Gardens. An abundance of flowers, what could be better?!

Fascinating work by an interesting man.