The Art House in Wakefield present a new exhibition by disability rights activist / artist Tony Heaton on show until 18 May. Heaton used his time as artist in residence through March 2019 to continue his practice in stone carving, as well as experiment with printing techniques. Review by Gill Crawshaw

A handwritten invitation to “touch (gently) if you want to” is inscribed below a marble sculpture at the centre of Tony Heaton’s latest exhibition, Altered. This personal touch, asserting the importance of accessibility, is an example of Heaton’s activist approach to his work. He delivers powerful messages with warmth and wit. 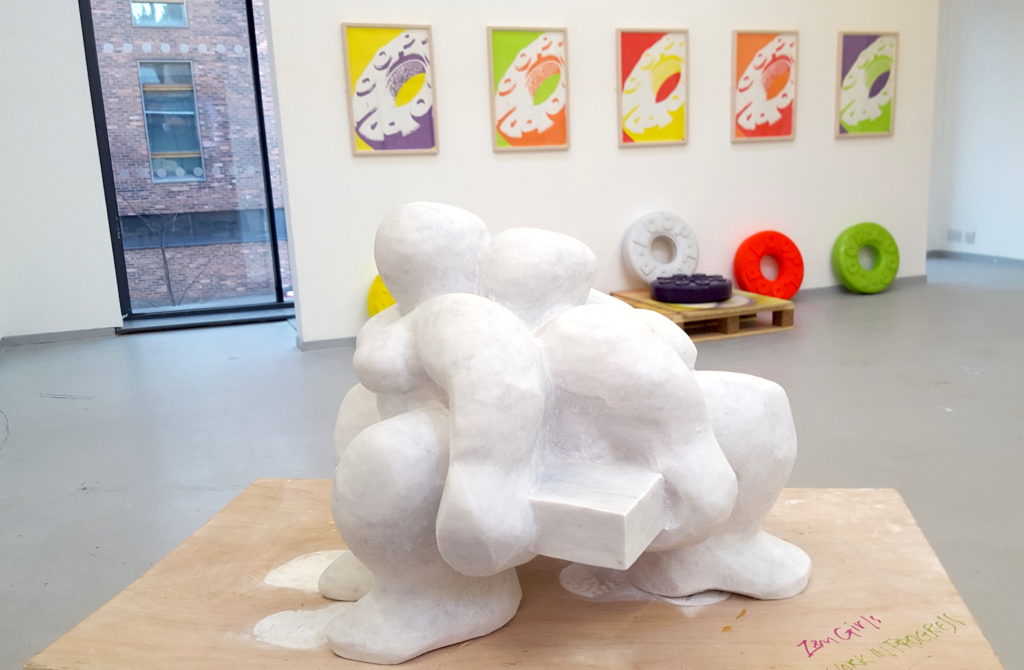 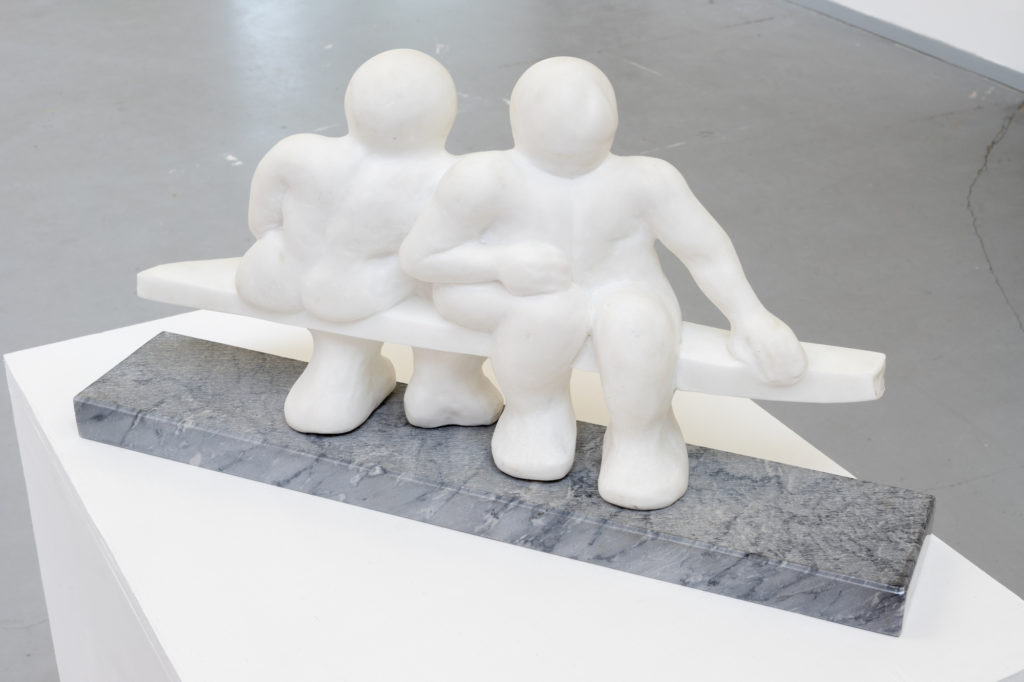 Heaton is, of course, known for some of the most distinctive and confident artworks in disability arts: Britain from a Wheelchair, Shaken Not Stirred and Gold Lamé come to mind. It is interesting to see how, following the recent residency he revisits some of his earlier works to develop ideas or create something new, and has experimented with new materials and printmaking using The Art House’s excellent facilities. These works come together in a coherent and pleasing show, perhaps not as confrontational as some of his early pieces, but compelling nonetheless. One of his well-known works, Raspberry Ripple, originally projected onto the Southbank Centre in London, is remade for The Art House in neon. It stands out in the space, even at a smaller scale than the original, its straight lines and angles contrasting with the curves and arcs of the other works.

That Heaton uses loops and cycles in his work has been stated before. His interests include both geometric circles and loops as well as cycles and loops of time, as he returns to and refreshes existing ideas and images.

Wheels are represented in the photo-montage Cycle Tour of Europe. The wheels this time are from bicycles rather than wheelchairs, which featured in some of Heaton’s earlier work. The bicycles have wheels or other parts missing, and have been abandoned, chained to fences and railings, no longer a means of transport and mobility. This series of black and white images of broken machinery reminded me of the typologies of Hilla and Bernd Becher, although Heaton does not adopt their detached, emotionless style. As usual, humour and humanity is present.

Altered (and much larger) versions of round fruit sweets read ‘LOOP’ rather than polo. The newer, juicy-looking resin versions are grouped together with the original marble sculpture in Sweet Meetings. The screen printed images of these stacked sweets could be studies for future sculptures. There is a similar study on paper, an etching, that accompanies the marble sculpture Zen Men – the object we are invited to touch. Being able to touch enhances our appreciation of the smooth surfaces and curves of the sculpted figures. Close inspection shows that the bench they are sitting on is being held up by the figures at the same time as supporting them, in a display of interdependence.

A drawing of Heaton by Tanya Raabe-Webber welcomes us next to the entrance – also the exit, both beginning and end – of this cyclical exhibition. I found the inclusion of work by a different artist slightly jarring, even though Heaton was the subject. If it was intended to show the person behind the art, it wasn’t necessary – Heaton’s personality and passion shine through his work.

Find out more at www.tonyheaton.co.uk