As Tony Heaton resurrects some crip humour with his latest sculpture ‘Raspberry Ripple’ commissioned by Lumiere London, Allan Sutherland talks to the artist about his career. Tony Heaton thinks that art should be dangerous, and that what makes it dangerous is the quality of the ideas contained within it. ‘I think about art as sort of tangible philosophy. How do you wrap thoughts, idea and explanations into form? There is a huge intellectual process that goes into thinking about the work, the materials, the title and what I’m going to say about the work.’

Heaton was born in Preston, Lancashire, in 1954, the son of a coppersmith. When, at the age of 16, a motor bike accident left him with a spinal injury, he switched from a comprehensive school to a local arts college at Southport, where, by his own admission, he was a disruptive influence until he got expelled. ‘I enjoyed the experience but it wasn’t any good for me.’

From 1972, he was self employed as artist, sign writer, disc jockey, record shop proprietor, progressive rock band member and mural painter. He had not at this period started to identify as disabled: ‘I didn’t even see it as a personal tragedy, I just saw it was something that happened to me, and it was bit of a drag but I just had to get on and get over it and sooner I’d do that, the more I just am assimilated back into the world that I’ve come from’. Becoming more serious about visual arts, in 1986 he enrolled on a degree at Lancaster University. A contemporary of Andy Goldsworthy, Heaton experimented with environmental sculpture on sands at Morecambe Bay.

Lancaster’s head of sculpture, Paul Hatton, noted that the marks left by Heaton were immediately distinguishable from the footprints of his fellow students and urged him to develop work about this. Heaton states that, ‘A chance comment about how the marks left in the sand by my feet and crutches made my tracks immediately identifiable became the catalyst for a whole series of works relating to disability and my interaction with the environment’. Heaton exhibited a plaster cast of his feet and stick imprints, his first piece of disability art.

Heaton’s early sculptures often use what I once described in Disability Arts in London magazine as ‘the everyday impedimenta of disability: collecting cans, NHS wheelchairs, X-rays, Part M of the Building Regulations’. But his work contradicts the normal associations of such materials by turning them into profound and joyously witty statements about the nature of our oppression.

Thus, an early piece, ‘Springback’ (1990), is an assemblage including a spinal X-Ray juxtaposed above the shock absorber springs of a scrapped motorcycle, referring to the accident which caused his impairment and the metal strengthening spring placed inside his spine. The wordplay in the name is typical of Heaton, an artist whose work engages the brain as well as the eye, and usually contains strong ideas about disability. Tony Heaton with ‘Shaken Not Stirred’ in a more recent recreation of the 1992 performance piece.

‘Shaken… not Stirred’ (1991), originally commissioned by London Disability Arts Forum and subsequently used as part of a press event for the 1992 anti-Telethon demonstration, consisted of a seven-feet high pyramid of 1,760 charity collecting cans, its ascending ranks of red plastic referring to the hierarchical nature of the charity system. The whole edifice was brought crashing to the ground when Heaton threw an artificial leg at it, a piece of performance art suggesting that the hierarchical system could be destroyed by the collective power of disabled people.

As Heaton’s work has developed, it has embodied ideas about disability and impairment. For instance, ‘Split’ (1995) is a woodcarving made from a piece of ash discarded by a wood turner as useless because it has a shake; a fault running through it. Heaton saw this as indicative of a society that sees only perfection and disregards all that is damaged or perceived as impaired. For him the block of wood was a thing of beauty: the problem was how to bring this out: ‘It’s a beautiful thing, you could see inside the crack the wood, tearing you know, still connected, so as the wood splits, you’ve still got that, almost like chewing gum stretched inside it somehow. And then I just thought it’s a fucking split. Just carve the word ‘Split’ into it. Job done, you know.’ The final piece consists of a carving of the word ‘Split’ with the letter ‘i’ formed by the shake, a simple but remarkable piece of work.

Heaton points out that a lot of his work from this period explores ideas of severance and connection: ‘I’m sure there’s a psychology to it of trying to reunite broken bodies, I’m sure there is something deeply related to the, you know to the psyche of how do you reconnect things, how do you rebuild things. I used to come back to this idea over and over again, this idea of reconnecting things together.’

Heaton’s early work was included in the London Disability Arts Forum’s exhibition ‘Out of Ourselves’, the first public exhibition of disability visual arts. It was then that he first met fellow sculptor Adam Reynolds whose work ‘Suitcase’ first convinced Heaton of the value of exhibiting with other disabled people. ‘This beautifully crafted lead suitcase, like one of those nineteen thirties, forties leather suitcases but made out of lead. It was open and it was full of dead leaves, which spilled out into the space – a massively powerful piece of work. I just thought, yeah, this is alright, this work stands up.’

The 1994 sculpture, ‘Great Britain from a Wheelchair’ is a map of Britain made from two grey NHS wheelchairs. I have in the past described it as the disability equivalent of Picasso’s bull’s head, made from a bicycle saddle and handlebars. It forms a wonderful repudiation of the value judgement (‘This is for some tragic bastard’, in Heaton’s words) implicit in the wheelchairs. An image of this work was chosen by the National Disability Arts Collection and Archive as an example of work from the ‘golden age’ of disability arts.

For the 2012 Paralympics Heaton was invited to redesign ‘Great Britain From a Wheelchair’ as lecterns for Lord Coe and Sir Phillip Craven during the opening and closing ceremonies. Monument to the Unintended Performer by Tony Heaton

Also in 2012, he was commissioned to produce ‘Monument to the Unintended Performer’, an installation for the Big 4 sculpture sited outside Channel Four’s offices. It brought together three elements in addition to the Big 4: the first based on the classical Greek sculpture Discobolus, the discus thrower, evoking the spirit of the Olympics; the second element, a circle, representing the wheel of the international symbol of access; and lastly, the introduction of gold, silver and bronze considers hierarchy.

Heaton stated: ‘I wanted to use the structure of the Big 4 as one of four elements that would fuse together to form a new cohesive piece – which would provoke thought and celebrate Channel 4’s involvement and commitment to the Paralympics. The subtext is the assertion that disabled people are almost always the object of scrutiny and curiosity.’ Afraid that Channel Four would find its subject too political, Heaton gave the work a much blander title during the commissioning process. ‘Gold Lamé’, included in the 2014 exhibition Art of The Lived Experiment, is an invalid car covered in gold spray. Heaton states that the Invacar has been ‘transformed from prosthetic to sculpture, transmuted from spazz blue to gold, from lame to lamé’, mirroring his own life adjustments, where he says, ‘I transmuted from biker to invalid’.

Currently Heaton is exhibiting Raspberry Ripple – one of 50 artworks produced by Artichoke and commissioned by the Mayor of London, set to transform London’s streets, buildings and public spaces into an extraordinary and immersive nocturnal art exhibition of light and sound.

Sited outside the Royal Festival Hall within the triangle formed by the access lift in the corner and the Nelson Mandela sculpture, Raspberry Ripple hints at access and freedom from the ghetto!  The sculpture offers a humorous, subversive, political comment on the concept of disability as deficit, with a fun, pink neon play on rhyming slang for Cripple. As Heaton says: “words can oppress but we cripples resurrect it in Crip culture and Crip humour, it’s ours alone to own.”

Raspberry Ripple is on show outside Southbank Centre from 18-21 January 2018. See Visit London for details

For more information about the work of Tony Heaton you can visit his website at http://www.tonyheaton.co.uk

Read the D4D Electric Bodies project for ‘Making Links’ – a cycle of transcription poems based on interviews with Tony Heaton, telling the sculptor’s life story. 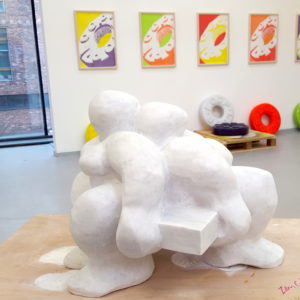 Angela Edmonds and Tony Heaton kick off our series of Artists in Conversation talking about Heaton's sculpture ZEN GIRLS, carved directly from Carrara marble. They discuss the artistic process and the thinking behind the work, which consists of two figures sitting back to back on a bench. Angela Edmonds: Good to see your sculpture Zen Girls ... 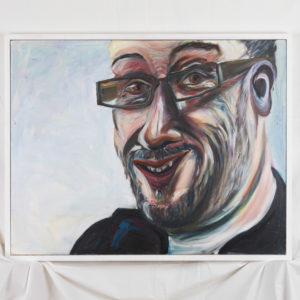 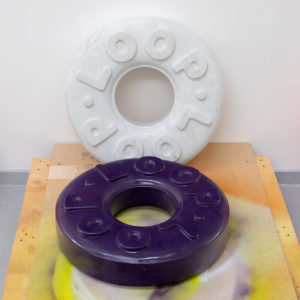 The Art House in Wakefield present a new exhibition by disability rights activist / artist Tony Heaton on show until 18 May. Heaton used his time as artist in residence through March 2019 to continue his practice in stone carving, as well as experiment with printing techniques. Review by Gill Crawshaw A handwritten invitation to “touch ...