Dodo Ink is an indie press which publishes daring and difficult literature. Their recent publication Trauma is an anthology of essays, which range from the personal to the political and from the raw to the reflective. Review by John O’Donoghue 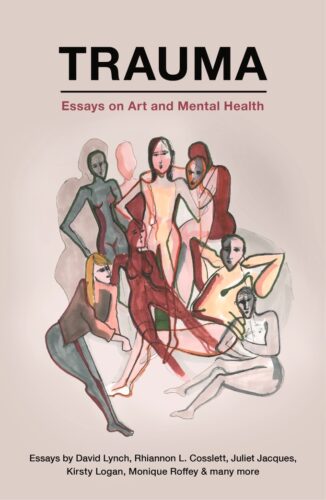 We live in traumatic times. As Covid dominates the headlines, it seems timely that Dodo Ink should bring out an anthology on this very theme. The editors – Sam Mills and Thom Cuell – have collated thirty-two essays ‘on Art and Mental Health’ some of which touch on our present impasse, most of which recount their authors’ personal experience of trauma.

Here we will encounter sexual and emotional abuse; drug addiction; depression; suicide; bereavement. A few of the essays report on bearing witness to others’ trauma, sometimes acknowledging the toll this takes, sometimes effacing the self in order to focus on the ‘other’.

The editors have managed to hook one particularly big fish: David Lynch, the film director, has contributed a short essay ‘On Creativity and Meditation’. Lynch is an advocate of Transcendental Meditation, which he’s practised since 1973. His contribution makes something of a strange companion piece, its tone of positivity and optimism somewhat at odds with the rest of the book.

In a short review it’s not possible to comment on every piece here, but I was particularly taken with several essays. Novelist Neil Griffiths writes about his experience of depression. You get the sense that Griffiths is clinging fast to his identity as a writer as he measures out his existence in clusters of words that might just contend against the great weight of depression:

Bring back madness. I mean, that’s what it is, right?… what this is, in my head. Madness. In both senses: ‘this madness – I can’t believe it’s happening’ and the other one… the one represented on this page. There is a third, of course: ‘He/she is mad’, meaning, sometimes at least, full of life.

These fragments convey the bleak reality of depression, which looks on at that other mode of being, ‘full of life’, in a kind of bewildered wonder. I think Griffiths’ fragments are assertions of life, even when ‘life’ feels completely lost, and as such are a valuable contribution to the literature of depression.

Rowena Macdonald also uses a formal arrangement of words on the page to convey her dealings with anxiety and depression. Rather ingeniously, she splits the page into two columns, so that her inner reality comes up against the indifference of the world:

Meanwhile, in the right-hand column:

5am: She wakes up in bed next to her boyfriend. Her daughter sleeps in a bunk bed in the same room. The room is well-proportioned, high ceilinged and airy with red velvet curtains and vintage furniture.

This account of trauma creates a similar sense of the doubleness Griffiths evokes, of the ‘abnormal’ self in fragments, while the maintenance of a kind of cool objectivity propels the ‘normal’ self onwards until recovery – if it ever comes – can take place.

Monique Roffey, novelist and activist, outlines a powerful therapeutic exercise in her contribution, ‘The Fish Bowl’:

First, we women, about fifteen of us, sat on the floor. The men in the group sat around us. We women began to talk about ourselves, very much relating to men and sex… almost every woman relaxed and opened up and began to say the truth about their life as a woman and their everyday sexual lives, and sexual trauma, ranging from rape to painful sex.

Roffey’s preamble to this point in her essay outlines an incident of sexual abuse she experienced when she was 13, and it’s this, and then the moment when the women in the ‘fish bowl’ swap places with the men who also open up about themselves and their relationship to sex, that makes this piece so powerful.

Naomi Frisby’s ‘A Recipe for Madness’ outlines her encounter with ‘J’, who lures her into a relationship that’s all about toxicity:

When J initially tried to discard me, it didn’t work, I wasn’t humiliated by his affair, I believed it was my fault… It isn’t until I realise the relationship is abusive that I feel humiliated. I feel ashamed I fell for his scheme… J had never loved me. Narcissists aren’t capable of it.

Frisby uses the conventions of a recipe to structure her account of coercive control, and while it’s tempting to categorise this piece as a ‘recipe for disaster’ it is a painfully honest account of abjection, humiliation, and recovery.

The piece that struck me most powerfully was Susanna Crossman’s essay, ‘The Clown’. Crossman explains the piece’s premise: ‘For over a decade, as part of my clinical drama-therapy practice, I work as a clown.’ She recounts her work in a French child day-care centre attached to a psychiatric hospital: ‘… I place eight mats in a circle, four chairs, a drum, and hide a secret red nose.’ She introduces herself: ‘… I am the clown. As you can see, I have a red nose. All clowns wear red noses.’ Then the children… speak as one: ‘But you haven’t got a red nose.’ She wipes away imaginary tears and asks the children help her to find her red nose. As she says, ‘The red nose is the smallest mask in the world. It doesn’t hide us. Instead, it reveals.’

This essay – part personal essay, part academic paper, part prose poem – powerfully enacts what writing per se promises to do, and what writing about trauma specifically, I think, sets out to do: to transform experience by recording it, to relieve us of memories that are painful by an act an of translation that draws on creativity, on dreaming, if you like, to reprocess dark matter and bring it into the light, however dim that light might be

This process may be therapeutic; it requires a certain amount of obstinacy, perhaps courage, definitely a willingness to believe in the self’s essential worth when beset by experiences that call into question our humanity, whether we’re traumatised by acts of cruelty, aggression, indifference, or abuse.

We may become like Crossman’s clown, bereft of our identity, of our clown’s red nose, but when, as Crossman says, ‘We found the red nose together… We have been heard, seen, recognised’ the traumatic experiences no longer dominate us.

Trauma is a welcome to addition to the works of witness which explore the theme of mental health. I know it will sit on my shelf for a long time, and that I will return to it whenever I too feel I have not been heard, seen, recognised.

Visit Dodo Ink to find out more about the press