I first stumbled on Jason Wilsher-Mills’ artwork a few years ago at ‘Ghosts in the Machine’, Shape Art’s Tate Exchange. He presented Brave Boy Billy, a 6 foot clown-like figure through which viewers could interact with via a phone app. His new work Jason and his Argonauts delves deeper into his digital world, presenting a gallery built from a thousand shapes and colors that I can only describe as a kind of psychedelic, feverish dream. 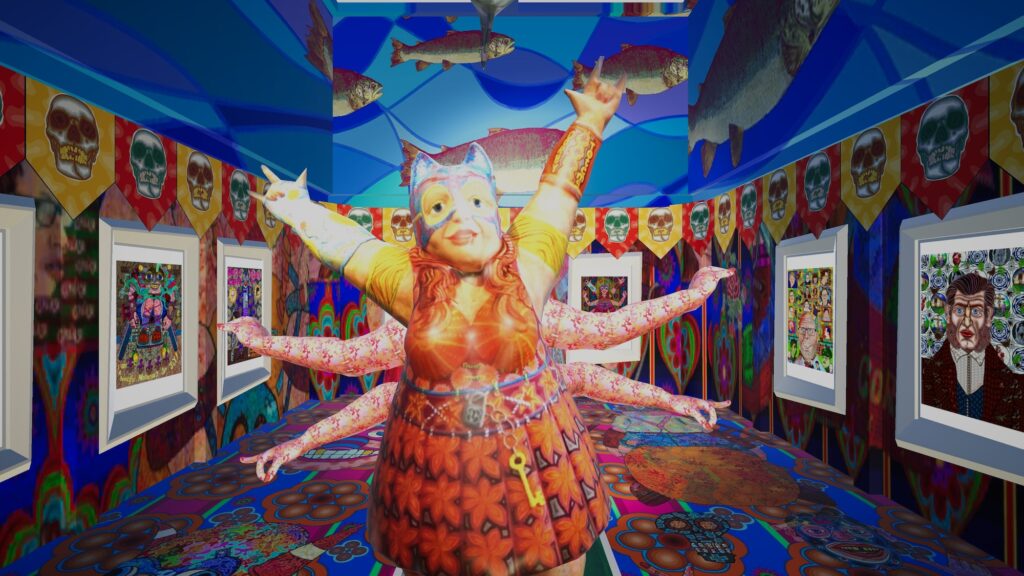 In the app, you point your camera at a flat surface and after a few seconds of calibration, a large box appears. In this box, a shark hangs from the ceiling with someone, somehow riding it. Below the shark, a six armed goddess stands in the centre, her arms waving as if submerged underwater. Behind her, a Lucha libre Elvis impersonator in platform shoes jerks his tongue out and sings into a microphone. On the surrounding walls, A series of strange but beautifully detailed portraits of people, including Jason, invite our attention.

This motley crew appear like members of an old travelling circus troupe, with names as diverse as Mario Lanza or Corby Rocker reminding us of the oddballs Pinnochio met on his adventures through Tuscany.

You can meander around the gallery either by physically moving around (please be aware of your furniture) or via a set of transportation buttons dotted around. You’ll find Liam Gallagher facing off with Captain Mainwaring for reasons unknown, an aquatic interior that becomes clearer the more you explore and a repeating carnival theme tune that may just rob your ability to focus on much else.

The work covers disability, illness and memory, and whilst there are references to these themes through the exhibition, Jason’s work cultivates a more universal sense of playfulness. There’s a knowing joy built into the space. It almost winks at you, inviting you to enjoy the humour of creation before getting into any meaty discussion. This approach could be seen as divisive, perhaps from fear that the work might be seen as childish or – worse still – dishonest. Yet it makes for a truly original and unforgettable experience.

There’s an uncanny moment video gamers have when the game unexpectedly glitches out – perhaps you moved somewhere you shouldn’t have – and your character would begin falling out of the built structure and into some kind of digital purgatory outside of the designers intention.

In Sophie Helf’s captivating Myrtle Avenue you stand alone on a street with only traces of human activity remaining. The floor beneath you isn’t really there. You hear a dulled out drone of cars some distance away as the subway train screeches. You drift around and see the closed down Prestige Barber Shop now a graffitied wall; an ATM, a dilapidated restaurant. Above all this, a large handwritten board reads ‘cheat death nyc’. Like with Jason’s piece, you can wander around this strange place by moving around with your phone, or by those movement buttons. 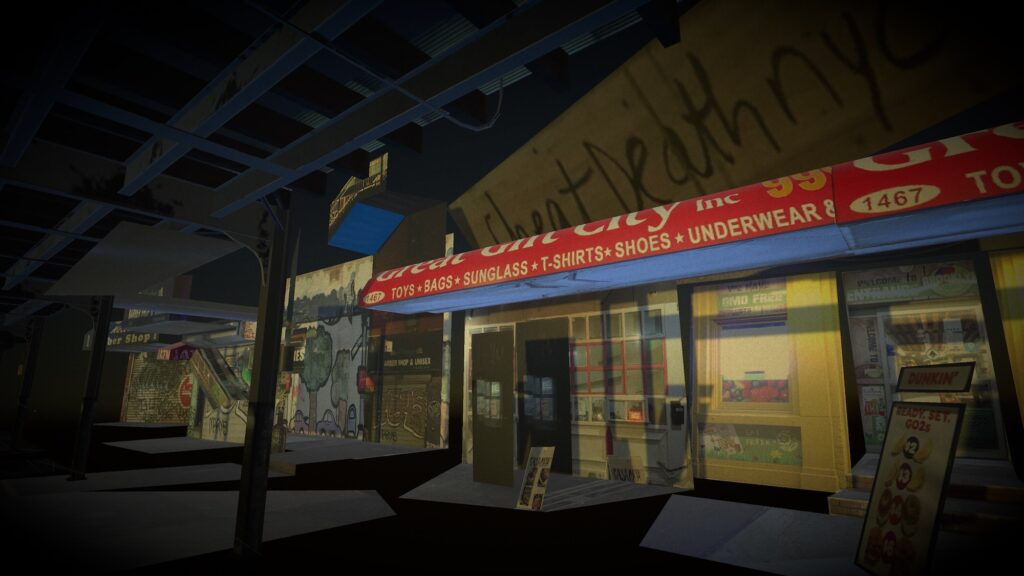 Sophie’s voice, emerging like a ghost, speaks of this place as if it were a distant memory. ‘Time hasn’t existed here for a while now’ she says ‘not that I can recall’… ‘Remember when I used to go places at the dead of night?’ she asks (the listener may be us, but it is more likely herself.)

The scene taps into an experience which is simultaneously alien and uncomfortably familiar, as if there’s some part deep within us oscillating with the pixels. Myrtle Avenue is presented as a place of significant meaning for Sophie, but it could also be read as a stand in for a lost earth.

The work asks the visitor to pick up its fragments (physical / emotional) and rework them into a personal narrative. It uses AR both as a tool for display and as a conceptual apparatus in this sense. The act of pointing your camera transports the avenue to your lonely room, or your empty lockdowned street, and in doing so illustrates some kind of universal truth about the situation we find ourselves in and our inability to remember what it was like beforehand.

In a similar vein Rebekah Ubuntu’s Despair, Hope and Healing: Three Movements for Climate Justice present a deep and meaningful understanding of a different situation. In the piece, 3 short films pay tribute to BIPOC Communities, who contribute little to the global climate crisis yet feel its effects most intensely. With the climate debate becoming an ever increasing fixture of modern life, the work taps into those it leaves out, in turn creating a powerful piece of activism demanding both affirmative action and a cultivation of love. 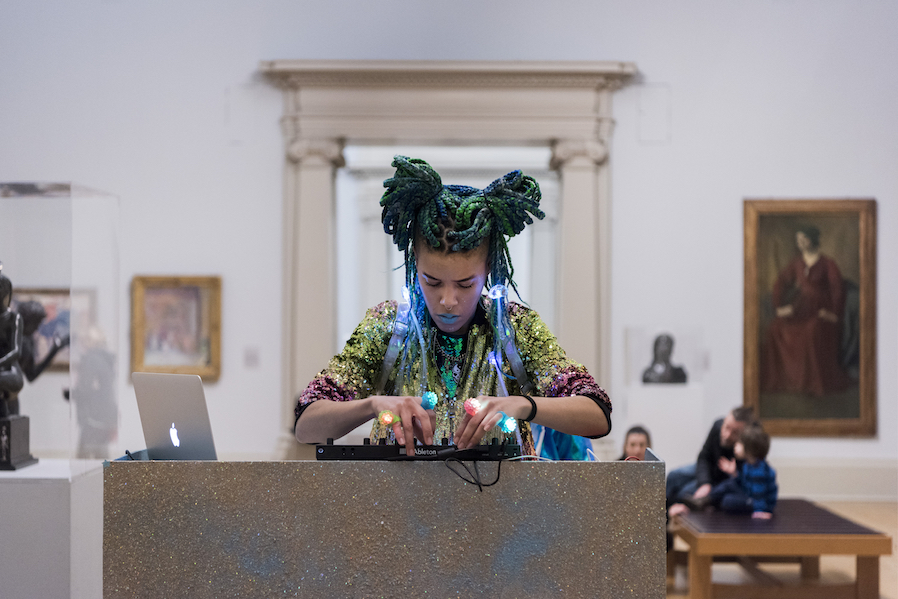 The first movement ‘Despair’ places you in a hellish landscape engulfed by a volcano on one side and a hurricane on the other. In the centre a black monolith appears. It’s a screen. The film begins with a statement from Black American climate activist Cheryl Johnson: ‘All people from all walks of life should have the right to breathe clean air.’ The narrator repeats the line, morphing it into a rallying cry. Shots of forest fires, hurricanes and storms accompanying the line ‘you don’t have to be an expert to know that there’s pollution in your community’ show climate change as a global phenomenon with multiple pressure points, targeting different groups with varying levels of severity. The film is consciously disruptive in this sense. It forces you to consider your position however seemingly safe / unsafe, and its relation to others in the crisis.

The second film Hope takes us to a different world. We are in a forest clearing; tall grass grows around us, yellow and blue butterflies circle over our heads. In the background, graceful wind turbines go round and round. The film begins with the following quote: “In my moments of loneliness despair, when all seems lost, I invoke my ancestors with the words are you there?”

As the work is a tribute to BIPOC communities, the identity of these ancestors must be taken into account. Yet there’s something universal going on here too. At least tangentially the piece calls to all ancestors – it asks us to consider what it means to reconnect with ancestry in a global way. Later, another voice comes in saying ‘I will never leave you’ as if to respond. The film has a rich spirituality in this sense, it yearns to re-establish the lines that empower the present with the past. The voice reminds us that ideas of hope must also exist alongside despair, and in order for us to move forward, we must believe in the validity of this deeper connection, and the rights of the communities who foster them.

The final film Healing builds on this foundation by presenting water as the source of connection. We are placed in the centre of an expanding ocean drenched in bright sunlight. On the screen, a heart rate monitor shows one single spike that morphs slowly into other shapes.

Snippets from Anishinaabe-kwe water protector Autumn Peltier’s UN Address tell us that: “Many people don’t believe water’s alive or has a spirit and people believe this to be true. Yet All original water moves through us and around us.” The spike turns into an engulfing wave, acting as a closure for the three movements, positing the idea that the solution is a little closer to home than we might think.

The American Writer William S. Burroughs coined the ‘cut up technique to describe a process whereby finished pieces of work, in his case fictional prose, could be cut up and moved around in order to create new works of art. Uma Breakdown, in their piece Mansions of Mist I uses this approach to tell a story about systems and feelings in a broken future. 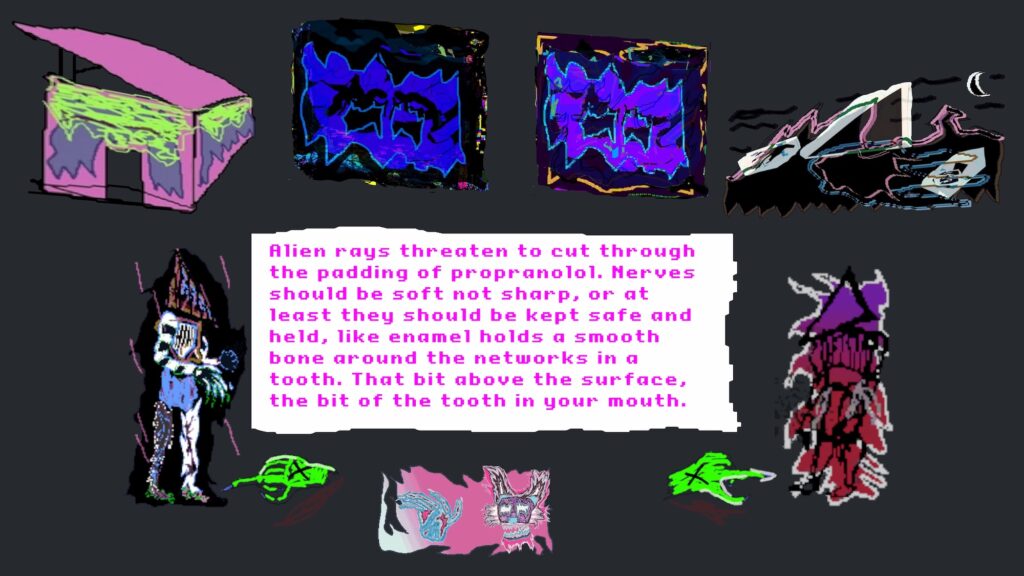 You are floating in space, surrounding you are friendly looking animated creatures. Two figures resembling ancient Egyptian gods stand either side of a white screen where green text appears. The artist wants each new interaction with the work to bring about a new experience, so the fragments could really be read in any order. I found this a bit difficult given that the text appears one after the other, but I nevertheless was able to build in my head a certain narrative out of it. I found the overall impression touching – the stories weave together a future of machines and the human souls who will live alongside it.

Unfolding Shrines works because it places the human in the centre of its cyber universe. It understands that genuine feeling and emotion is possible even within the confines of the little rectangle you keep in your pocket.

Unfolding Shrines  is available until 30th June in multiple ways – through online videos, (including a BSL version), a series of audiobooks or through a free innovative Augmented Reality mobile app from the App Store or Google Play.