Reflecting on some of the work at the Unlimited festivals at Southbank Centre and Glasgow’s Tramway, including Bekki Perriman’s The Doorways Project, Noëmi Lakmaier’s Cherophobia and Aaron Williamson’s Demonstrating the World, Joe Turnbull explores the effectiveness of the work presented outside of the traditional exhibiting spaces and examines the implications for the ‘visibility’ of disabled artists. When I first arrived at Southbank Centre for this year’s Unlimited Festival I was waiting outside the Royal Festival Hall as crowds surged past at the usual frenetic London pace. My ear was grabbed by a disembodied voice with a distinct Scottish accent. As I listened, a fascinating, if troubling, account of the daily experience of living life on the streets unfolded.

As was mentioned in my previous review of Cameron Morgan’s TV Classics Part 1 at Unlimited Festival, the curation and exhibition of the visual arts elements was problematic. Tramway went some way to remedying this at their own version of Unlimited Festival in Glasgow. But where both festivals excelled was in presenting art in unusual and non-traditional spaces.

The piece that had caught my ear was part of Bekki Perriman’s Unlimited (administered by Shape and Artsadmin) commission The Doorways Project. Following Perriman’s own experience of sleeping rough for many years her first Unlimited R&D revisited doorways she had slept in, reflecting on moments that occurred there; some tragic, others snatched glimpses of joy. For this iteration Perriman decided to share the stories of other homeless people about their experience of street culture, different from the usual narratives of blame or tragedy.

The Doorways Project popped up in unusual spaces around the Southbank Centre and in locations across Glasgow city centre, each time placing a spoken story in a place you might expect to find a homeless person. The idea is to catch an accidental audience and get them to stop and listen when they might not do so for an actual homeless person. The fact that there is no visual element mirrors the invisibility of homelessness.

This was a common thread that runs through each of the stories and was highlighted at Perriman’s artist talk at Southbank Centre. The feeling of invisibility is perhaps the most damaging aspect of life on the streets; worse even than the horrific abuse, discomfort and health problems it entails.

Disabled people in general and disabled artists specifically are likely to empathise with this experience, given that the latter’s work is still practically unseen by mainstream audiences or in mainstream arts spaces. Aaron Williamson’s own Unlimited commission, Demonstrating the World also plonks itself on an unsuspecting audience; like an alien presence that is somehow strangely familiar. This piece of performance art sees Williamson − master of the ridiculous – deliver a bizarre demonstration reminiscent of a QVC sales pitch that would play in the early hours of the morning, on busy Glasgow high streets and the main drag of London’s Southbank.

Williamson shows off the pointless multiple functions of his bespoke ‘absurdist furniture’, including a chair with a selfie stick attached, an extending ironing board and a cupboard with vacuum hoses concealed in each side, mimicking the recent explosion in YouTube ‘how-to’ videos of the most mundane tasks. He uses a series of hand gestures for particular functions alluding to sign language.

Passers-by are positively baffled. Is this the shittest sales pitch ever or postmodern irony taken too far? No-one seems sure. Williamson is inverting the usual power of the gaze held by the audience by depriving them of any comprehension. It also parallels how the deaf community must feel in a world built with the needs of the hearing in mind. Demonstrating the World certainly makes itself visible, but intentionally not understood. If these two works were purposefully innocuous, Noëmi Lakmaier’s Cherophobia was an unabashed statement, a piece of pure spectacle. It saw her suspended from 20,000 helium balloons in a 48-hour live durational performance art piece in Shoreditch Church. The setting was clearly an important artistic choice adding both aesthetically and symbolically. The grandeur of the Church’s pillars and vaulted ceilings juxtaposed with the childlike innocence of the multi-coloured balloons created a breath-taking contrast. The hallowed setting also invoked notions of ascension and crucifixion, both fitting given the artist’s ordeal in performing the piece.

The work was also live-streamed to the Southbank Centre and beamed across the world; purposefully encouraging the gaze of a largely non-disabled audience to be placed on the body of a disabled artist. In doing so Cherophobia raised extremely difficult questions about the ruthless objectification of disabled people and the nature of our voyeuristic society.

What each of these pieces showed is the opportunity that presentng working in non-traditional arts spaces provides can be invaluable, particularly for disabled artists who are still disproportionately underserved by those spaces. In each instance, the setting was central to the artistic vision and effectiveness of the piece. It also demonstrates how sorely we need to see more work by disabled artists embedded in all spaces, both inside and outside the gallery walls.

This article was originally published by Garageland. 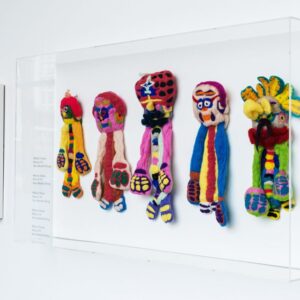 Aetlier Corners, an organisation that works with learning-disabled artists in Osaka Japan, brought the work of three of their artists to the UK with the help of Pallant House Gallery, Outside In, Unlimited (administered by Shape and Artsadmin) and the British Council for the Unlimited Festivals at Southbank Centre and Glasgow’s Tramway. Review by Joe ...