Hearing from Barry Ginley, Equalities and Access Officer at the V&A was interesting and may have provoked other organisations to consider the impact of employing a disabled person in such a role (and for sure he has a pretty full on role; embedding good practice into a site that has over seven miles of incredible art). Also, US artist Khairani Barokka’s musings about her new accessible poetry book raised the importance of alternative formats.

But it was the contributions from the performing arts guests that grabbed my attention the most. Their work is attempting to develop their own relationship with creative approaches to Audio Description (AD) and that’s what we were there to find out about; and to open up the general conversation within the creative industries about what that could mean for the sector.

Young Director and theatre maker Chloe Phillips won an Unlimited Impact award to creatively explore the changing role of AD in her Taking Flight Theatre Company’s R&D rehearsed reading of ‘The Importance of Being described Earnestly’. She talked passionately about her playful and sometimes farcical experiment.

She shared a clip from a short film made during her R&D. An audience had been invited to an open rehearsal. Actors were engaged in describing what was happening in a variety of objective and subjective manners, including conveying comment on emotional expressions.

The result was hilarious at times, although a bit chaotic. The tension between the desire to let creative expression take over and a need to convey important on-stage information was still present. I certainly welcome the interest and interaction that young companies like Chloe’s are exploring – the sector needs to challenge itself in new ways.

But I wonder what kind of support and training might be required to enable companies to fully understand the level of skill any real description requires. No matter how creatively delivered, audiences still need a sense of balance between knowing what’s physically on a stage and opportunities to understand performers’ interactions. If companies are to ‘play’ with their work like this, that’s great, but professional describers are trained and are often excellent wordsmiths. Skills like these are not easily achieved and this should not be forgotten – perhaps there is scope for more partnerships. The event was chaired by Actor Tim Gebbles who has been seen in many productions and on TV. He starred earlier this year in Extant’s production of The Chairs, in which Director Maria Oshodi had played with the concept of characters describing their actions in pre-recorded form, but played for all the audience to hear.

Extant’s work was not directly referenced, however, they were flagged up when another Unlimited recipient, dancer Claire Cunningham spoke about her work. She talked about her discovery of a form of self-description that had come out of work with dance company, Blue Eyed Soul many years ago and how that interacts with her current practice as a dancer.

She commented on the rehearsals for her latest piece The Way You Look (at Me) tonight, in collaboration with Jess Curtis. Described as a ‘social sculpture, a sensory journey for two performers and the audience’ – it was perhaps a natural platform for exploring descriptive narrative.

She wanted to see how far she could push the boundary in incorporating a form of self-description on stage and had invited both Chloe Philips and Maria Oshodi to be a part of the research process. Claire recalled Jess Curtis introducing her to a technique when a dancer is asked to literally talk out loud: ‘say what you do, say what you sense’ to awaken an inner and outer relationship with movement and the space around you, using emotional engagement. She had found this technique profound.

As she was talking about it, I was transported back to my time at drama school where we had done similar kinds of exercises in both voice and dance classes. It certainly was powerful in gaining connection to a character, our bodies and the performance space. I remember a project I was involved in with Extant, The Stage Language Laboratory where we also used similar techniques, researching what it meant to be a blind or partially sighted performer in space and our relationship to the stage. But who is this form of AD for, artist or audience?

After the speakers the floor was open to questions. Contributions from people such as Rory Heap reminded us about The British Standards around AD, also asking Unlimited if they would form an e-group for those keen to take the conversation further (which I think Unlimited are open to). It wasn’t easy for people to interact in the space and share their experiences. Perhaps people were processing the information or new to the idea of AD, or perhaps this session needed a different, more participatory facilitation style.

We were sitting in rows: sector professionals, artists, individuals and organisations. These panel-style contexts aren’t always the easiest to navigate and sometimes it’s hard to have the conversation openly and honestly with such a large collection of people. Smaller ‘break out’ group discussions might have been more effective. But it’s important is that these conversations are happening and it’s positive that events like this and the one planned at the Young Vic for 21 October exist. 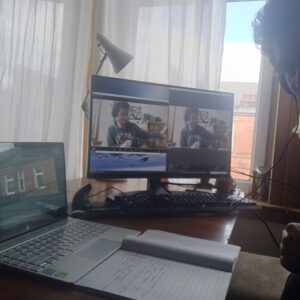 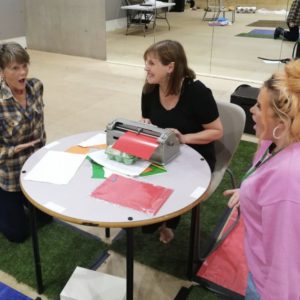