43 Percent is a dynamic new multi-media work, created by 21st Century Challenges and performed by Gary Gardiner and Ian Johnston, which explores the medical and social definitions of being human. It played at Tramway’s Unlimited Festival 15-16 September 2016. Review by Colin Hambrook. Ian Johnston and Gary Gardiner shared some tender moments in their 2014 show Dancer, which was supported by Unlimited (led by Shape and Artsadmin). The collaboration emerged initially through the impetus of Adrian Howells who had been working in residence with Sense Scotland (Adrian sadly passed away in March 2014 and the show was dedicated to his memory).

Adrian wanted to explore Gary and Ian’s love of dance, the notion of professional dancers/artists; asking the question ‘who is and who can be an artist’?

The artistic relationship has moved through some powerful developments since Dancer toured the UK in 2014. Their latest collaboration 43 Percent exudes warmth and the gentle, affectionate bond that has formed through the two men’s love of dance.

Using dance, video, movement and spoken word, 43 Percent alludes to the part of our bodies, which is not made up of water (we are 57 percent water) − the aspect, which makes us individual.

But aside from the cleverness of the uses of technology and music what makes this show so watchable and engaging is the playful rapport between the two performers. There is nothing pretentious or forced about their friendship, which plays out on stage in a sequence of dance pieces choreographed against filmed explorations of their relationship with family members shown via a giant screen at the back of the stage.

The humour Gary and Ian share seeps warmly through the show, inviting us to witness their humanity and to think about our own as a consequence. Ian knows most of the lines within the show off by heart: his own as well as those of Gary and their respective family members, and he can’t seem to stop himself from quoting and commenting; adding to his sense of enjoyment at being on stage. He has an infectious personality and as audience we can’t help but warm to him. There are plenty of tender and warm moments. Photograph: Niall Walker

Dressed in white vests and long johns the two performers begin with a sequence of playful movement, hugging, carrying, pushing each other from stage left to stage right. They come forward as if in a GPs consulting room to play out how we are defined and measured, medically. They ask us to consider how we quantify what makes us human and in so doing whether or not those medical categories are relevant?

Water crops up as a theme running through the show. Human beings cannot last much more than a week without water. And so pop songs the two dance to, stage props and stories told by family members thread an ongoing allusion to water throughout as a metaphor for the universality of Gary and Ian’s experience of the themselves and of the world. And, of course within that the show conveys a profound sense of the importance that popular culture plays within our lives and the way it triggers memory.

The live-streamed dance sections are particularly effective, giving a birds-eye view projected large on the back screen. The filmed work creates the appearance of a street scene, adding an extra dimension to the interpretation.

The inclusion of family members talking about the defining moments in the performers lives and giving them a song that sums up something about them was delightful.

However, I could have heard more of Andrew Huggan on cello giving live interpretations of the songs chosen for Ian and Gary to dance to, rather than just playing the recorded pop songs. More live music would have enlivened the static sequences within the show as well as adding a creative lift. The fact that I didn’t like any of the songs played other than The Hives ‘Two-Timing Touch and Broken Bones’ didn’t help.

Also, the reading from Zac Scott from his laptop screen at the side of the stage, was somewhat self-conscious and I’m not sure what the series of random questions he recited to Gary, sat on a stool centre-stage gave to the performance. His script is an attempt to add to the intellectual conceptual aspect of the piece, exploring medical and social definitions of humanity, but to my mind it takes away from the energy and flow of the show.

Overall, the performance is very enjoyable and it is a delight to see Gary and Ian working and dancing together again. Their dynamic presents an enchantment, the two being more than the sum of their parts. 43 Percent leaves you with a warm, fuzzy feeling and a strong urge to dance, in the knowledge that it’s something we can all do, whether we think we can or not. 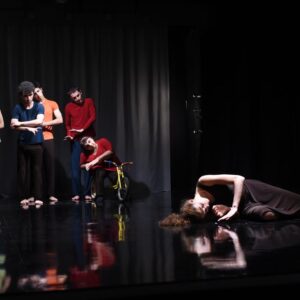 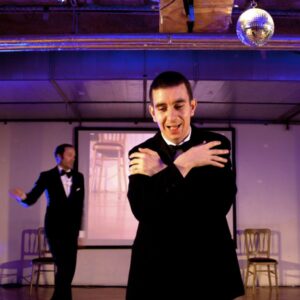 Created with the late Adrian Howells, 'Dancer' is a gentle provocation on what it is to be a 'dancer'. Producer Lucy Gaizely answered a few of Dao’s questions about what promises to be a fun and thought-provoking show in the Royal Festival Hall, Southbank Centre on Saturday 6 September. Ian Johnston and Gary Gardiner both love ...