DYSPLA international dyslexic and Neurodivergent (ND) film cooperative and festival, experiments with Virtual Reality (VR) within cinematography; believing that the capabilities of VR will capture the depth, richness and eclectic nature of Neurodivergent Perspectives. Review by Emma Robdale 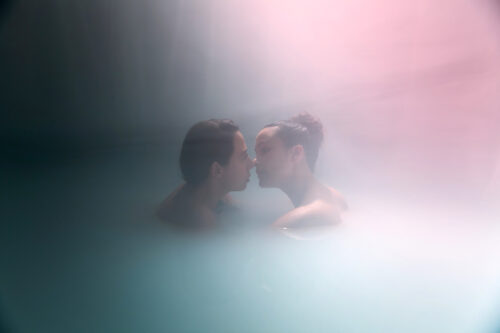 DYSPLA has produced four 3D, rotating, multi-faceted films. Designed to be viewed through a VR gaming headset, enabling participants to turn their head throughout the film to view different parts of the scene’s environment. Without a VR headset you can still enjoy the experience by manually rotating the screen with left, right, up, down keys. By doing this I was able to enter this new model of visually interactive and quite tactile cinematography.

As I rotated the screen, I became distracted and entranced by what objects surrounded the actor’s location. Often focusing on background characters’ faces, watching their expressions while listening to other characters speak. Every time you listen/watch 360° short films you appreciate them differently; focusing on elements that you might not have seen the first time around. As well as adding new layers of sensory appreciation, surprise and enjoyment to films, DYSPLA believes that the slightly discombobulating effect of VR more accurately embodies and transposes Neurodivergent experience.

The first film I viewed depicts two women in a romantic relationship: it switches between them being alone in a spa confiding in each other and discussing shame and sexuality, to them being on a train, surrounded by people. In both these scenes you, as the watcher, can focus your attention on whichever character you choose, along with exploring the rippling water, and being able to look along the train carriage at surrounding people, and out of the window. It is designed to make you feel as though you are actively in the scene, an eavesdropper, interacting with the environment, rather than simply an abstract observer.

The second 360° film involves a woman and a man striking renaissance style poses. They are naked and you can use the camera to focus between the woman and the man; they slowly unfold into new positions. As their positions alter, they reveal more of themselves, and you notice that the female model is missing a leg and the male model an arm. A god-like voice plays over the top, commanding you to feel or notice certain attributes. It challenges traditional western ideals of beauty and perfection. 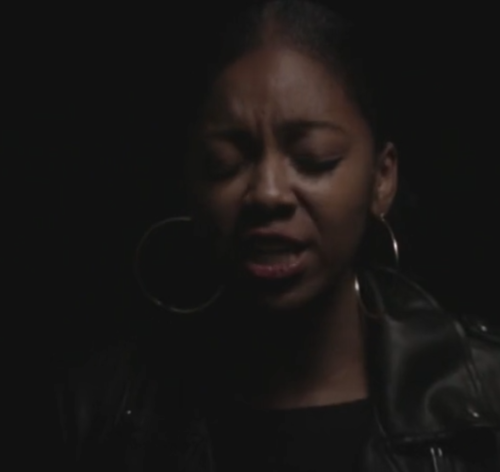 Screenshot from film three of a black female performer.

The third 360° film follows a female black rights spoken word poet, surrounded by eight people from differing communities. It starts with a number of statistics demonstrating that ethnic individuals and communities voices are not fairly represented within the UK political system. This VR film has a plain black background, but the constant sound of a train traveling forward sets a natural beat.

The woman repeats certain motifs from her spoken word piece while moving back and forth in a set number of steps. As you listen you can focus on any one of the faces around her, they do not directly respond to her words. As I observed their faces twitch, their smiles falter while their eyes wandered, I consider who they are, and what they are thinking.

The last 360° film focused upon a man’s face surrounded by darkness. He breathed heavily and coughed. As he does this you can rotate to see his face from various angles. Not much happens, but he whole scenographic experience leaves an ominous impression.

After viewing these four shorts, and experiencing their radically differing viewing modes, I felt them to be the start of something bigger and much more elaborate. I am excited to follow DYSPLA and this new production method to see how the possibilities of Virtual Reality progress into future cinematography.

For more information about DYSPLA go to their website.

For more information about the Living Record Film Festival go to their website.