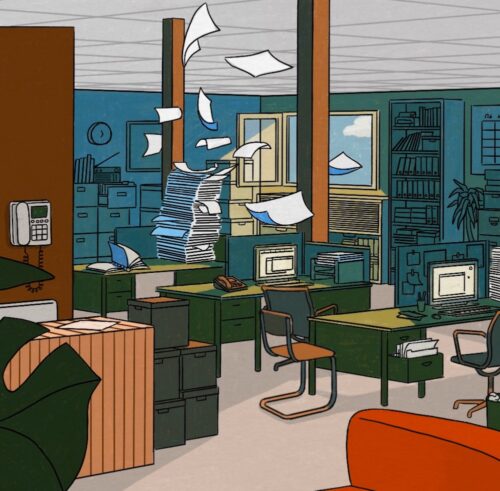 Waiting. This is the ‘new normal’ for millions of Brits seeking financial assistance from the government. The emotional costs of lost lives and livelihoods from the pandemic are well understood. But for those receiving or waiting to receive Universal Credit (UC), it is another emotional toll altogether. Based on statistics from the UK government’s site, there has been a 98% increase of people on UC from three million on 12 March 2020 to six million on 14 Jan 2021.

Merel Smitt’s interactive piece While Waiting, Wait Here, seeks to recreate the soulless, bureaucratic space of a UC office where visitors are forced to contend with an often inaccessible and dehumanising system. The website is based on stories gathered from staff and service users at Yes Manchester. Rather than using the more commonplace storytelling format to convey their experience, Smitt weaves together staff and user’s words into a virtual reality.

This format works on a number of levels, most importantly in that it removes the emotional burden from those navigating the benefits system and places it on the website’s visitors.

Upon visiting the landing page of While Waiting, you are greeted with a message – presumably one you’d receive from a greeter or receptionist – telling you to take a number and have a look around the space while you wait. Once you have taken your ticket, you are navigated into a beautifully illustrated waiting room with décor dating back to the 1980s complete with a burnt orange half-moon sofa and brown wall accents. As you move your arrow around the screen, an X indicates items you can interact with.

There is a dizzying amount of detail put into Smitt’s piece, some of it taken directly from Universal Credit applications like a customer feedback form, other content what you’d expect to see at a UC centre, from a ‘self-care support jar’ with vague tips, to an out of order water cooler wedged between a printer and a stack of boxes. Whether real or reimagined, each interactive item contains an element of humour. The crossword puzzle lying on the waiting room table feels like a parody of the system itself with questions like, ‘What famous composer would you hear up until 2018 when calling the Universal Credit number?’

While there is no wrong way to experience the piece, the lack of direction and amount of content left me feeling overwhelmed. That combined with the small text, the jumble of overlapping flyers on the bulletin board and the half-dozen resumes toppling off the tower of paper, it leaves you wondering how anyone manages to navigate Smitt’s piece, let alone the UC system.

The longer I spent sitting with While Waiting, the more I started to understand how elements of the piece that had frustrated me began to feel less like design flaws on Smitt’s part and more like intentional choices on her behalf, giving the participant a glimpse into the daunting process of proving one’s right to basic necessities. After a day exploring While Waiting, I felt a sense of dignity being returned to those struggling with Universal Credit’s bureaucracy and the responsibility placed on a system in desperate need of an overhaul to meet the needs of people in a post-pandemic world.

MINDSCAPES is a programme produced by SICK! Festival in Manchester, partnering with cultural institutions in The Netherlands. You can access the While Waiting, Wait Here via the Mindscapes website. 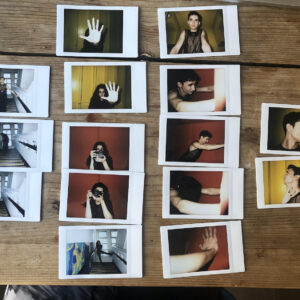 Theatre Degasten co-create an online zine with young people in Manchester and Amsterdam for Mindscapes Festival: Kate Lovell had a virtual leaf through its pages. Disability Arts Online · Theatre Degasten Article Audio “I feel like the world has stopped”: an epitaph for the last fifteen months and a potent line from a poem written by a ... 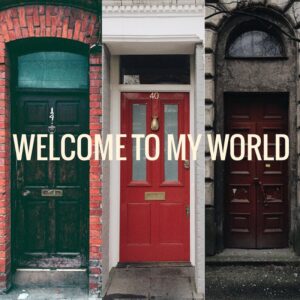 Welcome To My World: reflections on identity and place

As a part of Sick! Festival’s Mindscapes programme (premiered on YouTube), four filmmakers two from Manchester and two from Rotterdam, revisit the neighbourhoods they grew up in, and through this, explore the dichotomy between the physical reality of places and the temporal space that can linger forever in the mind. Review by Katie Driscoll The first ... 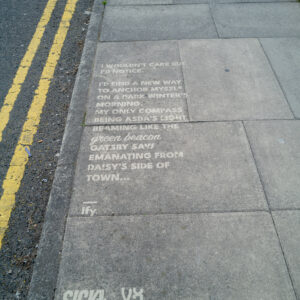 Signs of Life: Streets of Poetry

Omikemi reflects on Streets of Poetry - a project within SICK! Festival's Mindscapes programme in which Dutch poets Elten Kiene and Sjaan Flikweert, Manchester-based poets Saf Elsenossi and Ella Otomewo have worked with migrant communities to create a collection of new poems that reflect a sense of place and identity. Visual artist Jess Loveday has ...