In the second feature on artists who call the north of England home, Letty McHugh interviews Verity Adriana about the influence that living in Hull has had on her artistic practice. 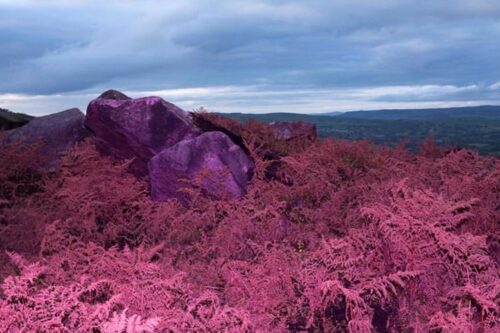 Back in February, when we were all still allowed to do exotic things like leave the house and meet our friends, I met up with my friend Verity Adriana. Amongst other things I wanted to find out how she ended up presenting at a conference in Venice. I asked Verity about her preferred title: ‘photographic artist’: “I don’t like to be called a photographer, I don’t mean that in a  pretentious way but if you say you are a photographer people think you’re a wedding photographer, and I’m an artist who happens to use photography as a medium.”

According to her website, Verity is ‘a practising visual artist who uses light, installation and photography to investigate the phenomenology of the metaphysical and existential.’. Verity lived in Hull for 20 years, and the city is often referenced in her practice (in fact her presentation in Venice was about Hull City of Culture) she currently lives and works in West Yorkshire.

I asked Verity what originally took her to Hull. “Do you know what that’s a really good question, because I was born just outside Hull, but spent my childhood living all over the world”. Verity’s Mum worked as an English teacher internationally, and at the age of 14 Verity found herself unhappy with life in the United Arab Emirates: “I didn’t feel like I had any sense of identity, was I British? Was I Arab? Was I Asian? I wasn’t having the best time personally or educationally.”  She decided to move back to England on her own still only 14 and wound up living in Hull: “Hull was where we went when we came back to England, it was the only place that felt like home,” she explained.

Hull is a place with a certain reputation for being, well, not the nicest place. It’s not somewhere I’ve ever spent time, but the stereotype is that Hull is isolated, and I asked Verity how the real placed lived up to its reputation.  “Hull is bleak, it’s beautiful but there’s a bleakness to it and I’m not sure that Hull has ever been honest about that. I love the place and I do miss it. I miss the convenience of living there and the ease of living there and it’s really cheap. It’s so cheap, everything is on your doorstep and so friendly.”

For me personally growing up in West Yorkshire is inexorably intertwined with who I am as a person, and the way I view the world, this comes out in the work I make as a creative practitioner. I wouldn’t make the work I make if I came from somewhere else. I was curious to know if Verity felt her experiences in Hull shaped her practice in a similar way.

“Hull has massively shaped who I am as an artist, Hull was the driving force behind Lumen.”

Verity’s project Lumen began in Hull, the work, which was made by recording light along the river Humber ‘Investigates how light and photography have the power to transform ordinary and familiar subject matter into moments of sublime experience by challenging our perceptions’ 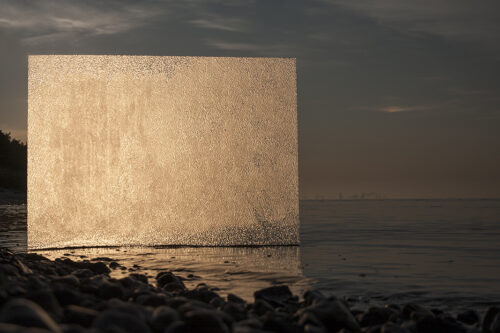 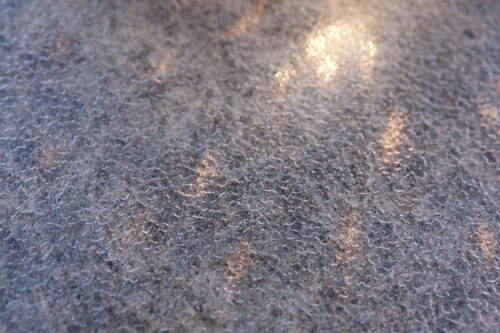 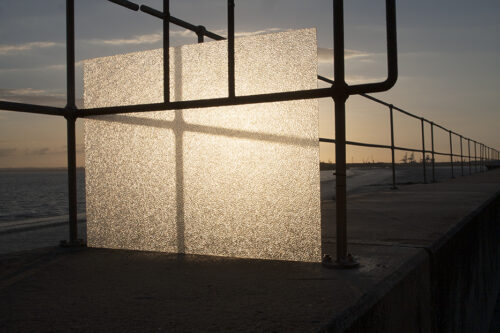 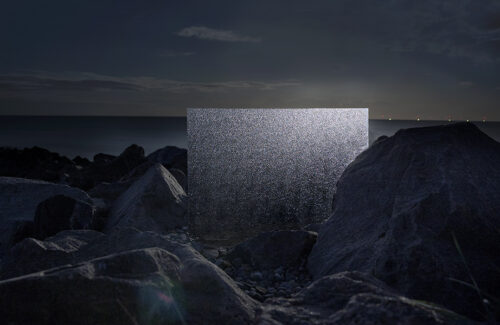 “When I started work on Lumen I was at a difficult point in my life. I was having problems with leaving the house sometimes, so I started exploring work I could make in my flat. I became interested in surfaces the textural eye and light. Then the project became about the fact I was starting to feel claustrophobic in Hull. I began going down to the river Humber and I made work along the Humber capturing the interaction between the light and a sculpture that I’d made. The work became an exploration of light as a tangible symbol for the transcendent, it’s God, or Allah, or the universe, whatever word you want to use for it. For me, the Lumen was an investigation between those two things, my mindset at the time and the ways we all seek connection with something bigger than ourselves. Light itself is our connection to the beginning of the universe.”

Verity first conceived her project Lumen when we were both studying together for an MA in Creative Practice at Leeds College of Art. It was a pleasure for me to watch this project develop into what it is now. I’ve always felt it is something of a love letter to Hull, capturing the beauty and magic that we rarely get to see associated with the city.

It’s obvious listening to Verity speak of her home city, just how much she cares about the place, but she doesn’t shy away from talking about the city’s problems.

“Hull is geographically isolated. It is. It’s over an hour to Leeds. The train system is tricky. We are the end of the line. But a lot of the problems come down to funding. Hull is underfunded even compared to other places in Yorkshire.”

Our conversation turns, almost inevitably to funding and investment in the North of England, I ask her opinion on the whole ‘It’s grim up North’ cliché.

I wanted to know why, when she loved Hull, she decided to move away and the picture that emerged was very familiar to me. A lack of opportunities in Hull led to her feeling increasingly frustrated.

“I was starting to feel stuck in Hull. I used to come home on the train and feel dour.”

Verity got a new job and moved to Coventry, and immediately noticed the contrast between north and south.  “And I do consider Coventry to be the south” She clarified “It’s vastly different in so many ways, just vastly different. And I worked with a lot of people from Birmingham and London. So obviously there’s a connection between the Midlands and London, it was like someone opened the door a tiny little bit into a completely different world. And I was on the other side of that door, it was a room I’d never been in. I didn’t know it really even existed. You hear about it, and then you kind of see it. And it’s like, Jesus.”

But at the same time, for all the opportunities moving ‘down south’ could offer, Verity found herself missing Yorkshire. This is a problem that I’ve faced myself, the cost of all the opportunities in the south is a constant feeling that you don’t quite fit in. In Verity’s words “The job was fine, and the people were lovely, but I just wanted to come home.”

Through all this Verity maintained her link to Hull through a project commissioned by Hull Council to record the legacy of Hull’s year hosting City of Culture in 2017. I asked her about the effect that year had on the City.

“2017 was an amazing year because there was such a buzz. New things were happening every day. But it was like they came in and threw us a massive party and we were grateful because in Hull we love a party. But after it was over, there wasn’t the infrastructure there to sustain it and one wasn’t put in place.I’m not living in Hull now so I don’t have that same insight anymore but it feels like a lot of things have gone back to pre-2017 levels. Which is a shame.”

It was this project that lead Verity to Venice in 2019. She received a fellowship from the British Council and in January 2020 she visited Venice again to present a research paper at the EuroAccademia Conference.I asked her how it felt.

“There was this moment when I was about to present and I just couldn’t stop thinking, how did a girl from Hull end up presenting at a conference in Venice? I am someone who is very introverted. It was really scary, but I did it! I was really proud of myself afterwards”

“I think that lack of confidence comes from Hull in a way. it is self-depreciating. It doesn’t know how to celebrate itself. So as a practitioner, as an artist, as a speaker, as an educator, to live in a city where you are massively under confident as a city and then obviously that is ingrained in you as a person” 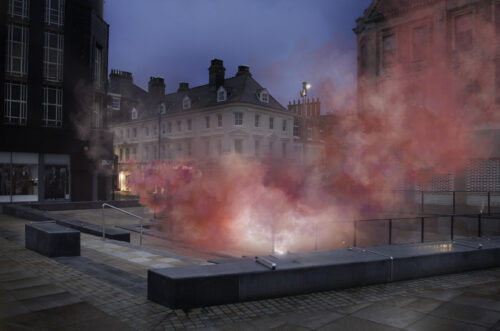 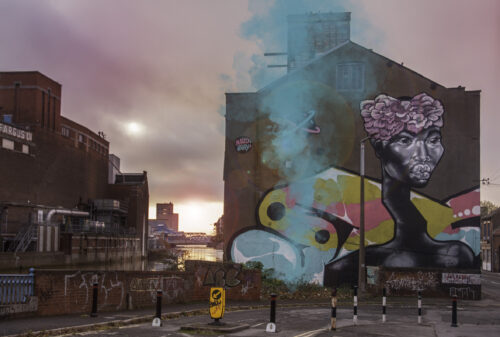 I wanted to talk more about this contrast between East and West Yorkshire. Part of what I wanted to explore in this series is how the north is seen as one homogenised Hovis ad of a place, but in my experience northern towns, all have their own distinct character. I’ve lived for most of my life in West Yorkshire, and I find that experience has given me a lot of confidence, the part of me that is a braggart and a show-off was baked into me through living here. I asked Verity if she had noticed this contrast since living in Ilkley and working in Leeds.

“Yes. The whole persona of the people is entirely different. There is a confidence in West Yorkshire. Leeds has an energy, it’s the money that’s put into the city, the industry, the opportunities. Then there’s Bradford and everything that has to offer. It’s like a different world.” 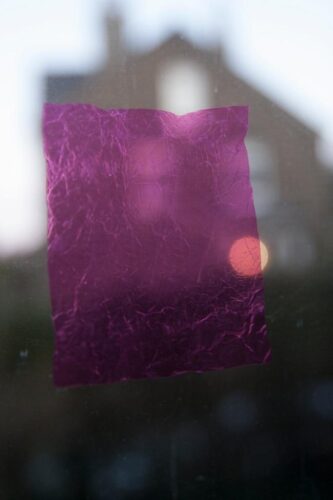 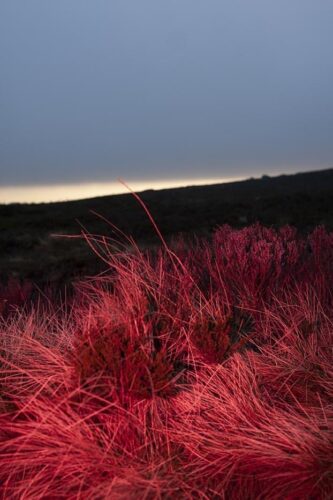 Coincidentally Ilkley is in the same parliamentary constituency as my home town of Keighley, both towns fade into different edges of Ilkley moor. When I was growing up I was always aware of the contrast between the two towns, Keighley a former mill town dealing with all the challenges brought by post-industrial decline, Ilkley, something of a middle-class haven, home to Betty’s tea room, the poshest place I knew of. I asked Verity how she’d found living there.

“It has been a bit of a culture shock. I came back just wanting to be in Yorkshire, I didn’t know anything about Ilkley. I felt like it was too nice for me, but I like to think I’m bringing a bit of Hull realness, It’s beautiful. I’m loving the moors.”

Since moving to Ilkley Verity has been making new work recording the light on Ilkley moors as well as looking at the pre-historic stone carvings that can be found there.

When we met Verity was looking forward to showing Lumen in a major exhibition due to open September 2020, for obvious reasons that’s less certain now, but you can still see her projects on her website and keep up with her on her instagram page and twitter