As part of my ongoing professional development program supported by Arts Council England, I took my first ever trip to the Venice Biennial accompanied by my long-term collaborator archaeologist and artist John Oxley FSA. I set out with the clear intention to use the opportunity to explore the social and cultural space that is generated in the lead up to the festival opening. I wanted to explore this as an opportunity to make new work and to gain a greater understanding of how the Biennial works. It also offered an opportunity to meet with fellow artists and curators.

My current ACE-funded professional development program – ‘how to be a dyslexic artist’ – started with the development and the creation of a new piece of sculpture that consisted of a bespoke wooden briefcase with an integral LED screen on the side displaying films and a control button on the handle that allows me to switch between different film sequences. This sculpture or object engagement with an audience is carried by the new iteration of my character The DIV (dyslexic intelligent vision) this time the Grey Architect. The DIV as the Grey Architect is able to use the briefcase to display spaces beyond the one that is occupied by him and the audience. So with that in mind and with The DIV’s interest in architectural space, Venice seemed like the perfect opportunity for some performance and filmmaking experiments.

I was also able to meet with and see the excellent show by Stephen Turner, a fellow artist at the Artists Agency. Being in Venice at this time also allowed me to attend shows, events and engage in some enlightening conversations. These opportunities arose through invitation, design and through pure accident. Some of the points on my first journey through the Venice biennial opening week are illustrated below.

Special Thanks to David, Mark, Andy and John for your guidance and support. 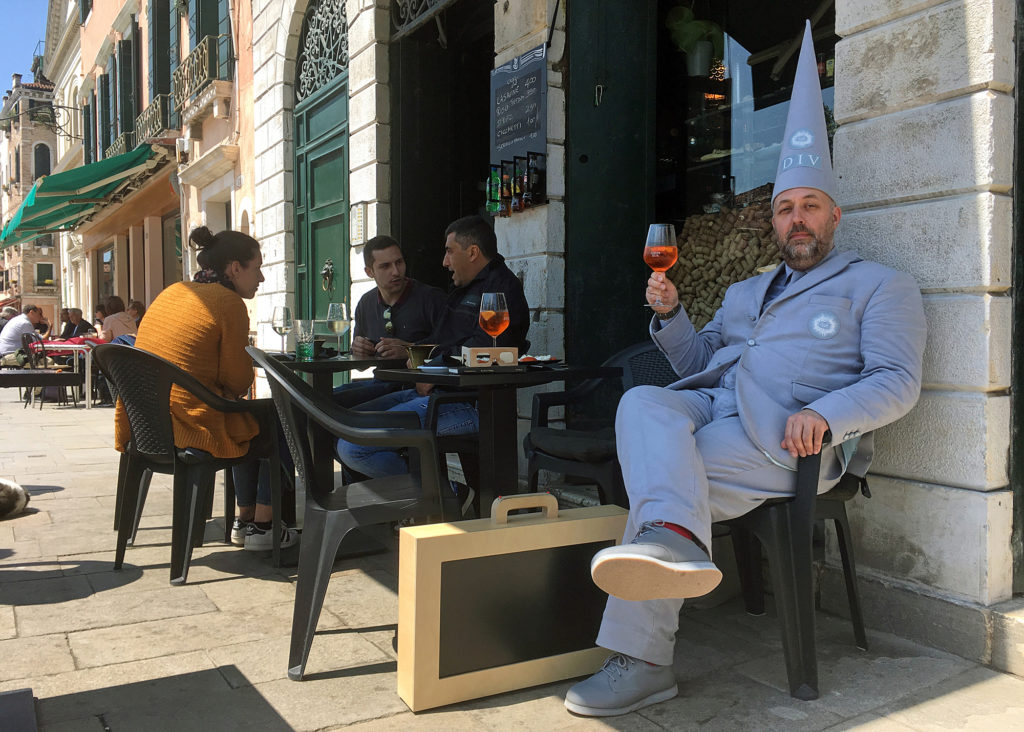 Relaxing outside a cafe bar following a performance experiment on my final day in Venice. The Grey DIV persona in traditional Venetian style with a glass of something bubbly and cold in his hand. His Vision art goggles and a copy of ‘A Benedictionary’ on the table beside him with the cinema suitcase by his feet. Photo by John Oxley FSA. 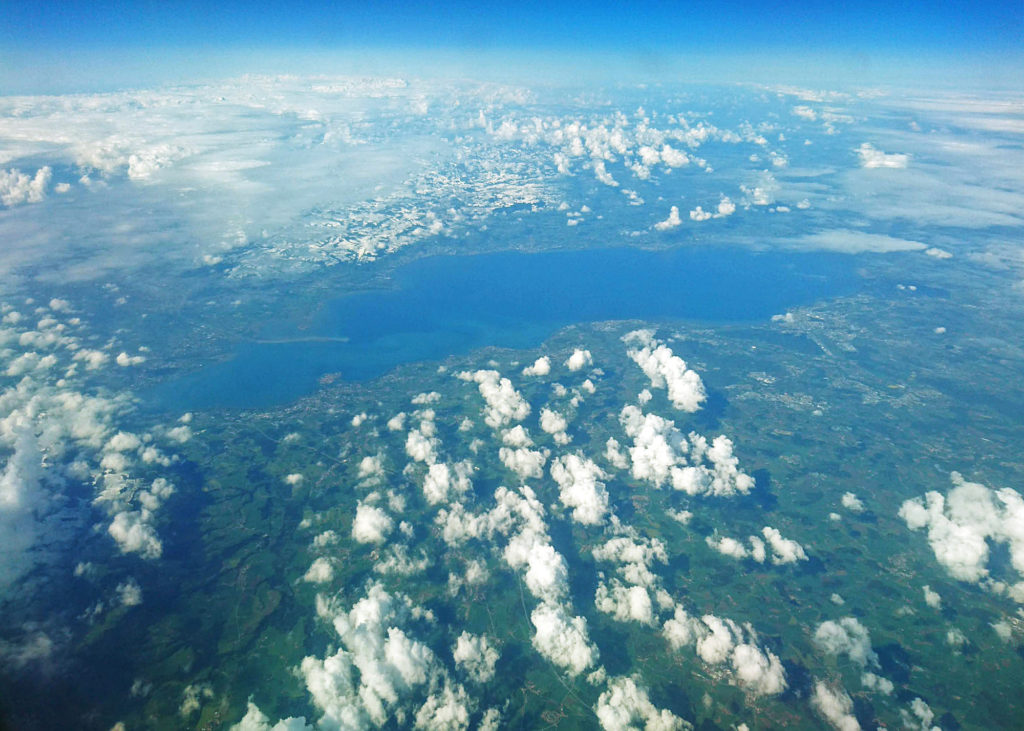 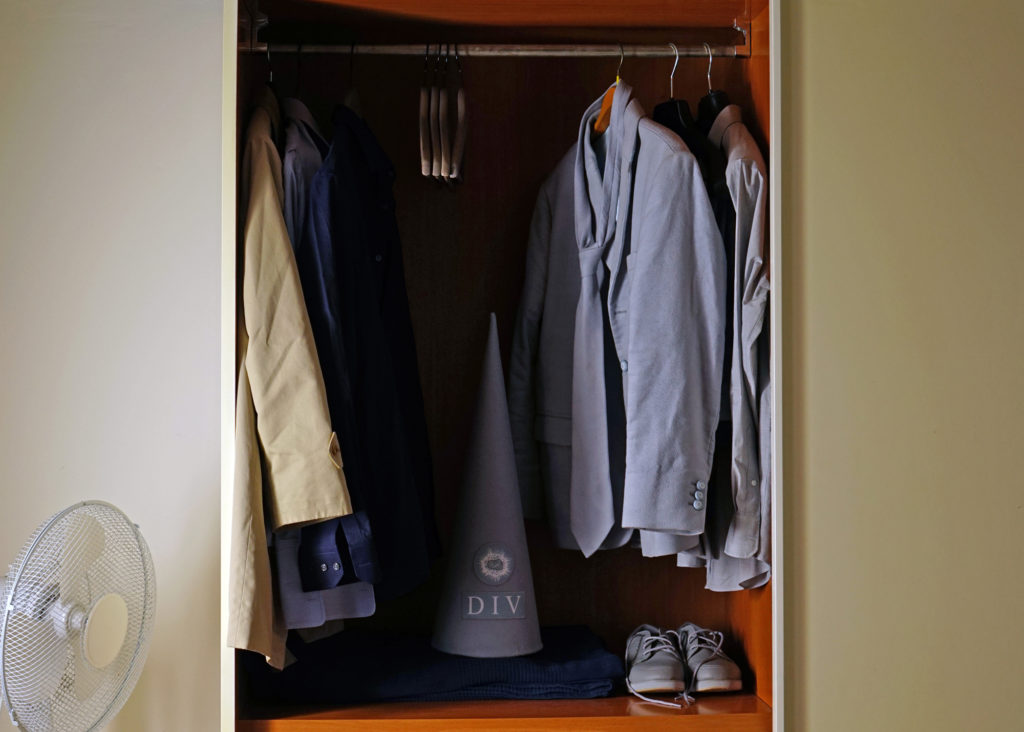 My costume hung up; my hat reconstructed from the flatpack travel case; the Grey DIV outfits arranged in my temporary Venetian home, all stowed safely away, time to have a look about. 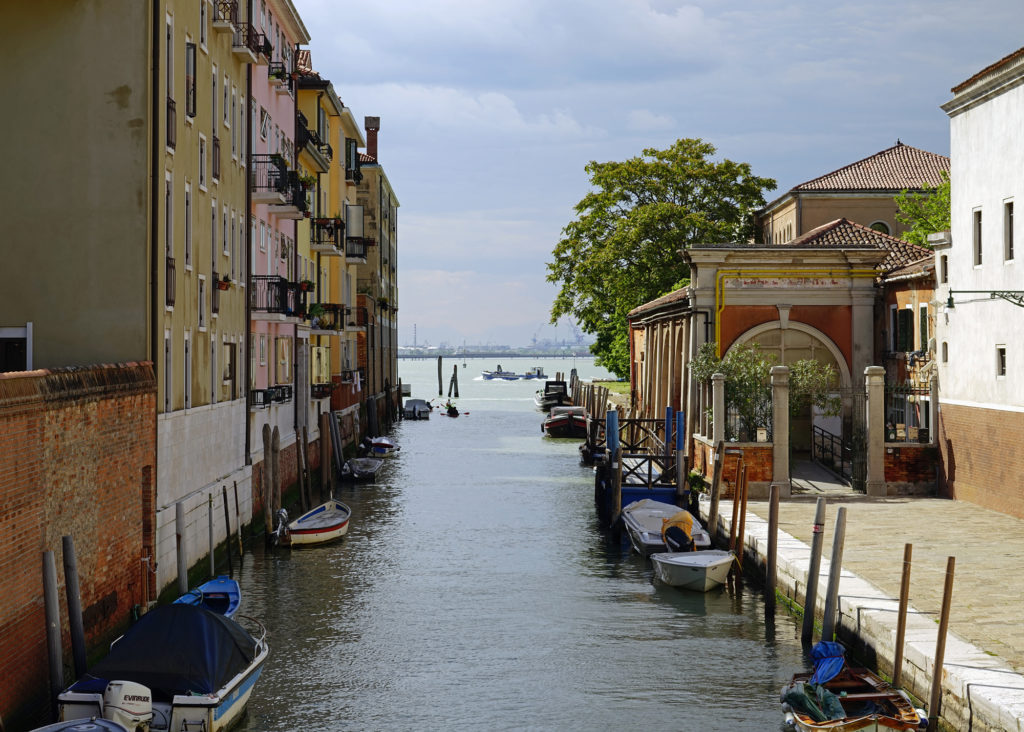 Looking along the Rio Madonna del’ Orto towards the lagoon and mainland, or what we began to think of as our street. 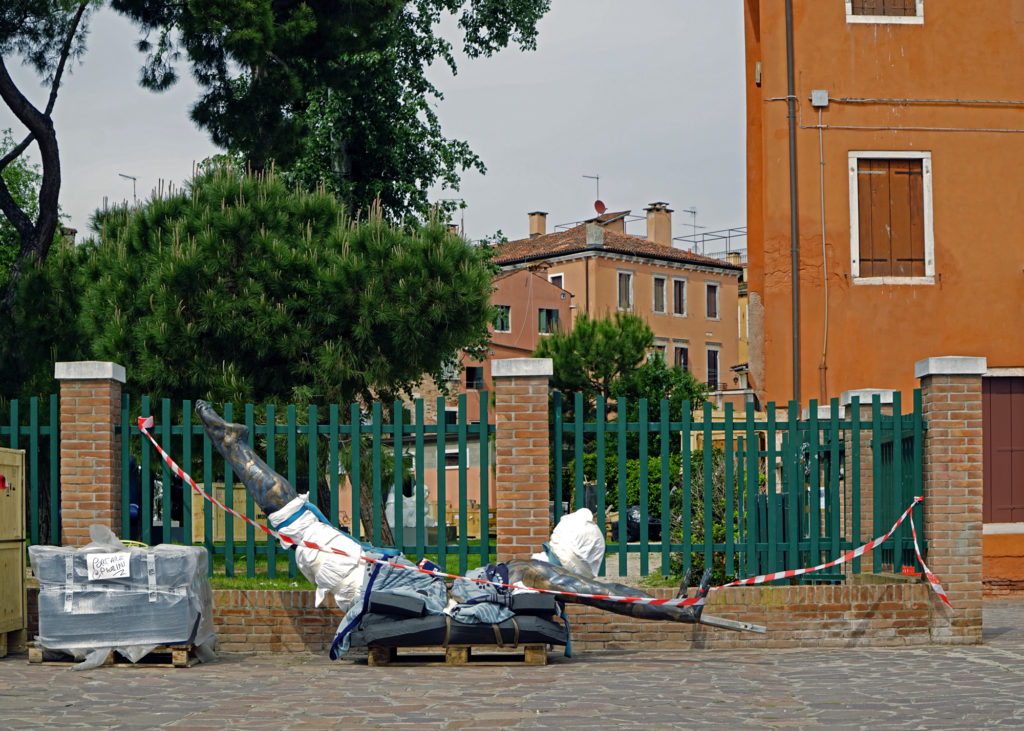 A large female figure which has the appearance of being bound and gagged by packaging, just another sculpture ready to be lifted. 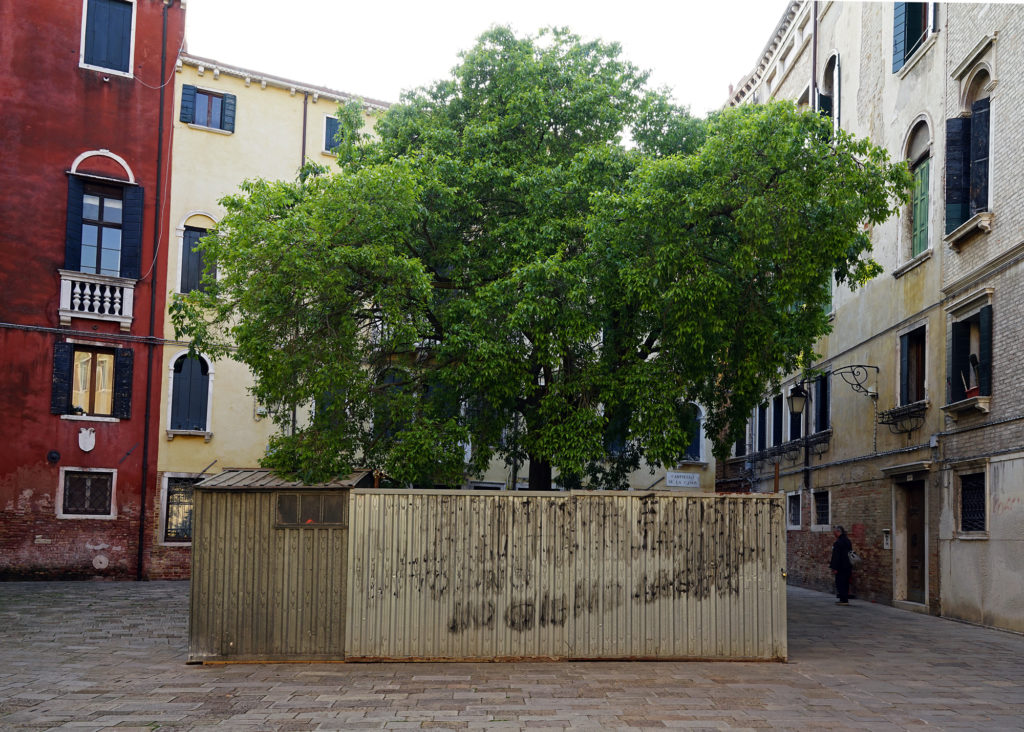 With so much of Venice being made of ancient stone or a least having the appearance of it, all interventions including those by artists and builders standout. Temporary fencing/ hoardings in Campiello de la Cason. 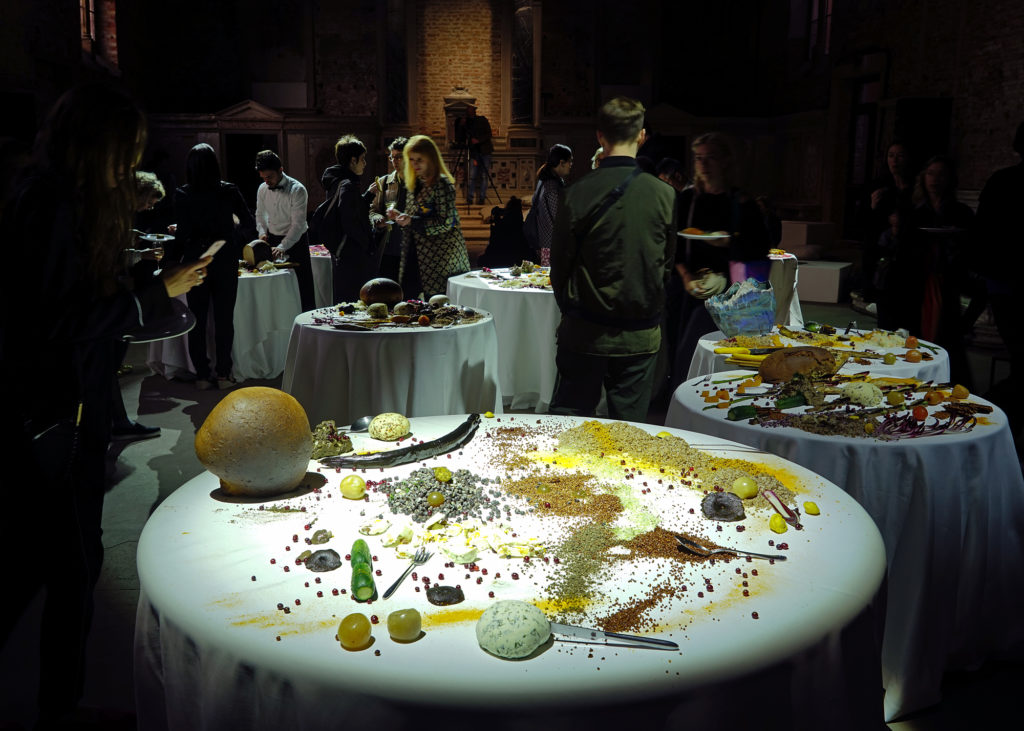 Announcement of RIBOCA2 (https://www.rigabiennial.com/riboca/riboca-2). Event included a Panel discussion about curatorial concept underpinning RIBOCA2, which will be held from 16th May to 11th October 2020, and an Edible landscape created by the artist Lei Saito, in the Chiesetta della Misericordia, on 7th May 2019. 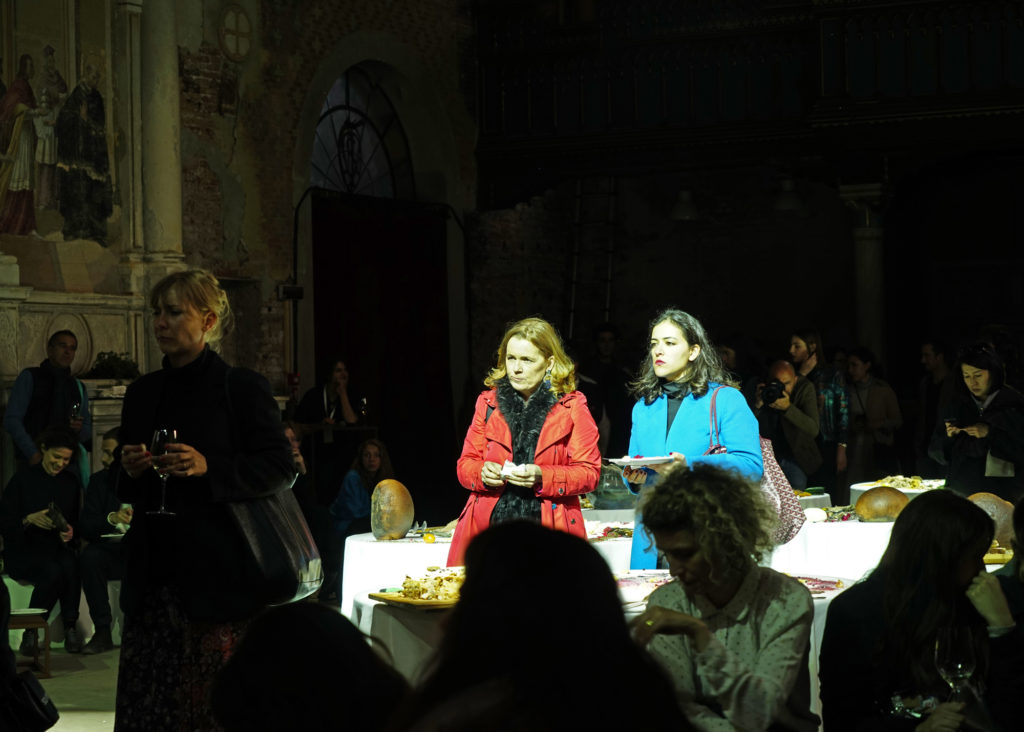 Participants in the announcement of RIBOCA2. A journalist in red asks about the impact of the first Riga biennial. She was specifically interested in the commercial model of the festival and its impact on the income of the city rather than any impacts on cultural and social well-being. Thanks to Agniya, Laura and Gita for making us feel welcome and the engrossing conversation and debate. 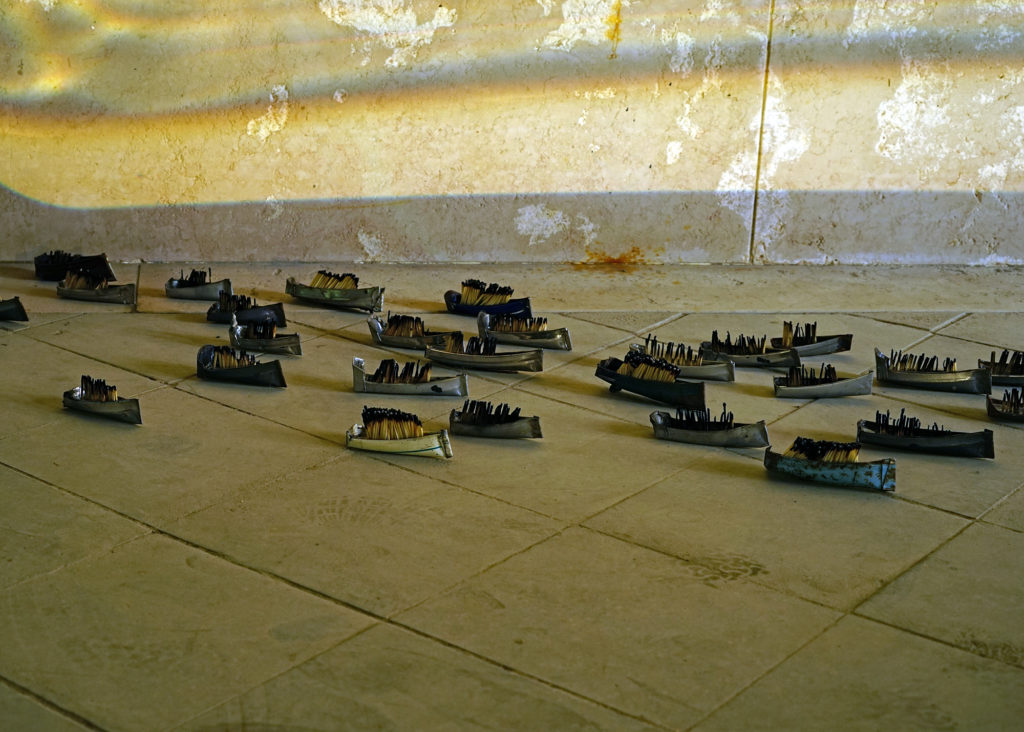 Installation by Syrian-born, UK-based artist Issam Kourbaj in collaboration with British poet and classicist Ruth Padel. This image shows detail from Dark Water, Burning World: 98 Moons and counting … (2017-19). The installation of 98 boats constructed from recycled bicycle mudguards packed burnt matches. The installation formed part of Alive in the Universe, Venice Biennale 2019 (http://www.aliveintheuniverse.com) in the Palazzo Pesaro Papafava, co-curated by Caroline Wiseman and David Baldry. Thanks to Issam and Caroline for the enjoyable, insightful conversations. 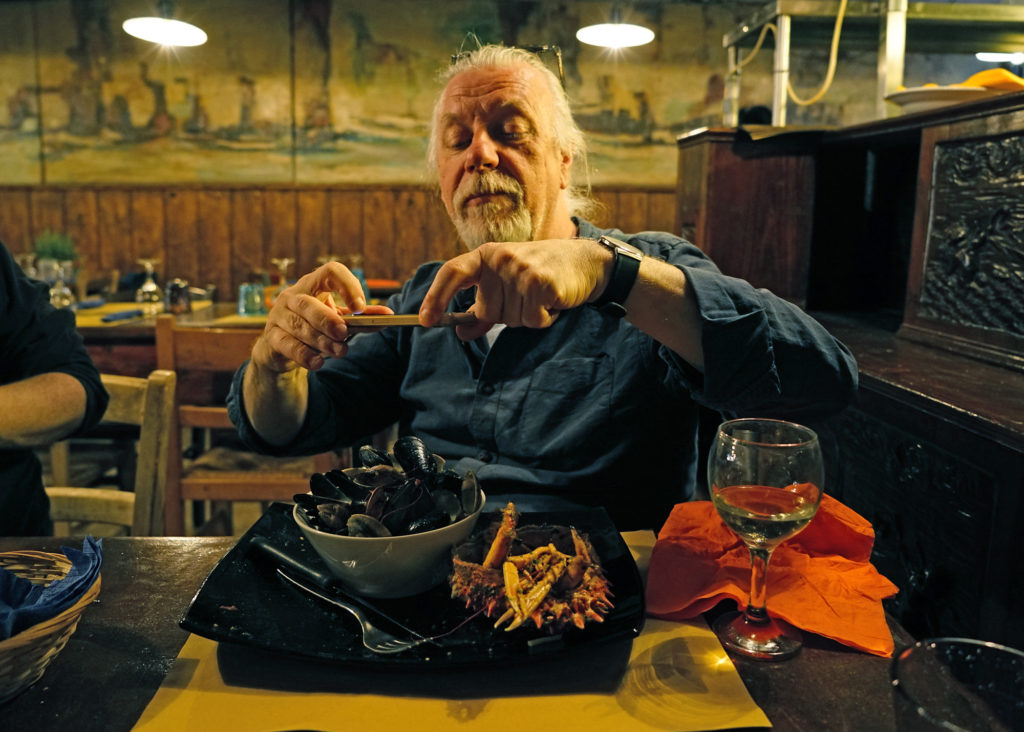 Nothing in Venice is left unphotographed, John Oxley being documented, documenting the remains of his lunch in Il Paradiso Perduto, Cannaregio 2540. 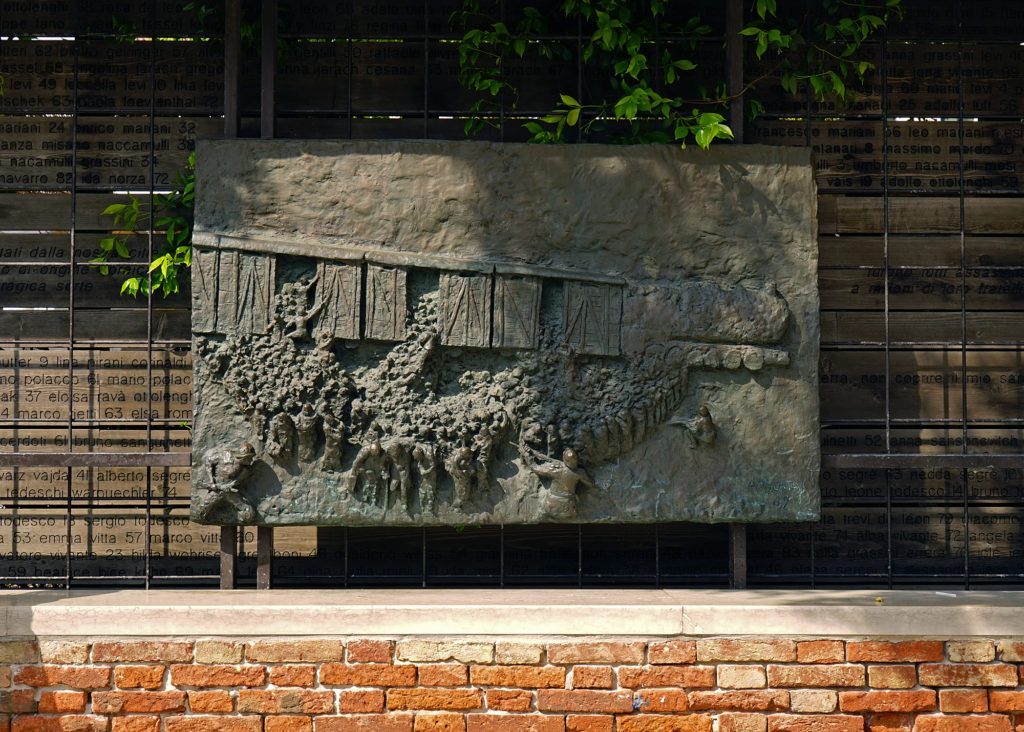 Detail from the Holocaust memorial in Campo del Ghetto Novo. German troops arrived in Venice in 1944. Venetian Jews were gathered in the Campo del Ghetto Novo. They were deported from here to concentration camps. Very few returned. Arbit Blatas, a Lithuanian artist, created this monument. There are 8 separate panels. This panel, The Last Train, sits in front of the names of the Jews deported from Venice. 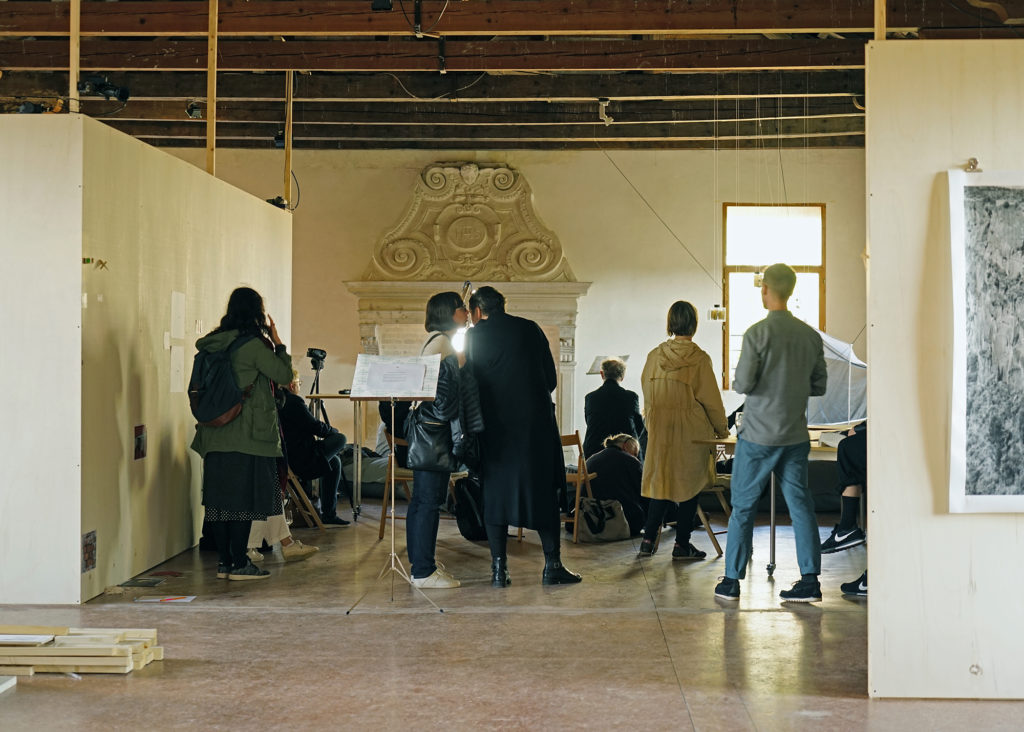 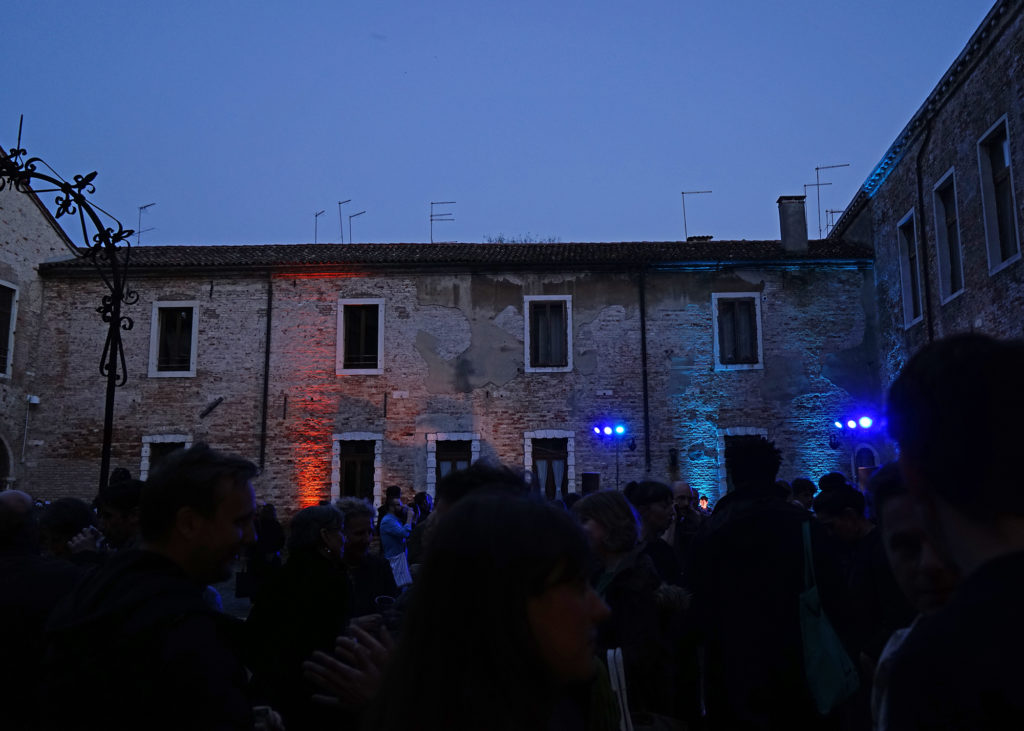 Launch Party for the Welsh Pavilion, a fantastic opportunity to make contact with friends old and new. The launch event was held in the courtyard of the IPTP di Venezia. 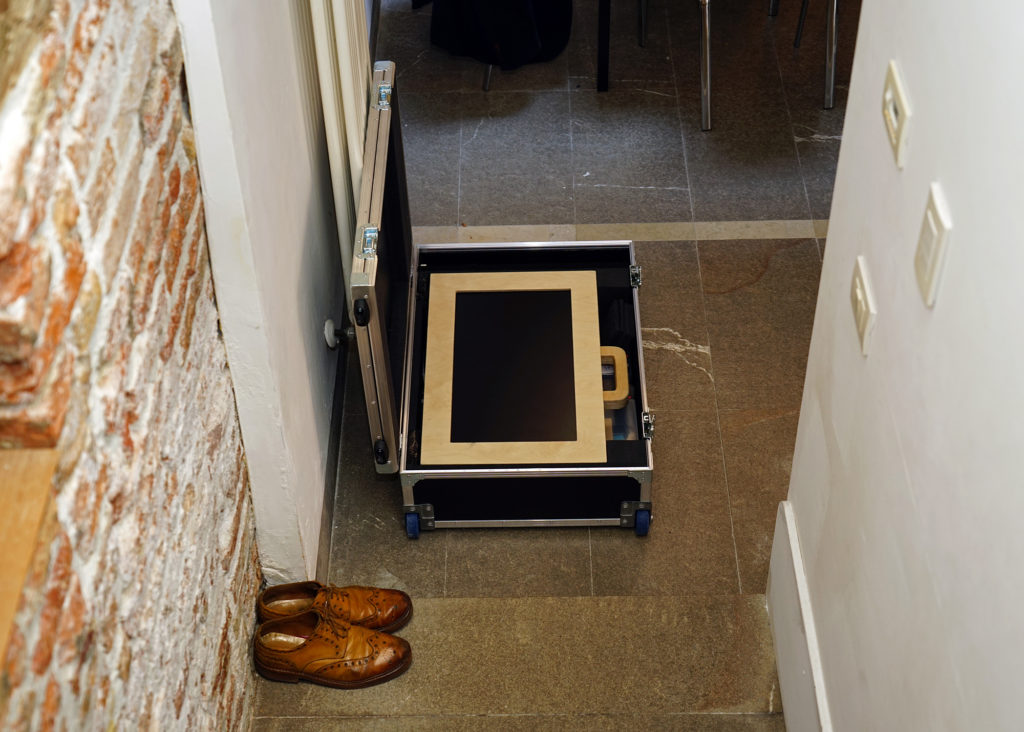 The cinema suitcase (developed as part of my residency at Access Space Sheffield in 2018) sits snugly inside of a purpose-built flight case, ready for the journey home.