Andy Sargent, is a visual artist who paints, draws, sculpts and photographs all manner of things related to his experience as a ‘physically limited’ artist. He shares his experience and vision of ‘the stikman cometh’ as one of our recent commissions of artists in isolation.

Weird things are brewing in a garage on a housing estate in the midlands. Various noises, including hammering, sawing, and industrial music can be heard. No, its not the sound of some crazy fictional scientist trying to invent a dystopian horror machine, its just me working on a series of artworks!

I was struck down by a severe spinal injury in 2010 when I was 40 years of age. I was paralysed from the waist down, until the wrecked pieces of my spine could be worked on surgically. I had to learn to walk again, lost my job and basically had my life wrecked by this injury. I went through an emotional roller-coaster ride, up one minute down the next, squeezed through a corkscrew, then spat out out the other end.

I turned to my art to take me to a “better” place. After spending a year or so, painting landscapes (even gaining a place on Sky Art’s Landscape artist of the year 2017), I started to formulate plans, to create work that described my condition, making awareness of being in this situation, and pulling no punches. The first stage of this work was entitled ‘Hidden monster’. It dealt with my spinal injury, sudden shock of being struck down, excrutiating pain, the side effects of the drugs, and how I survived that phase. This work resulted in me gaining a ‘Talking Birds Nest’ Residency at Coventry Artspace, Eaton House in 2019. During that residency, I spent four weeks bringing ‘Hidden Monster’ to an almost completed state. 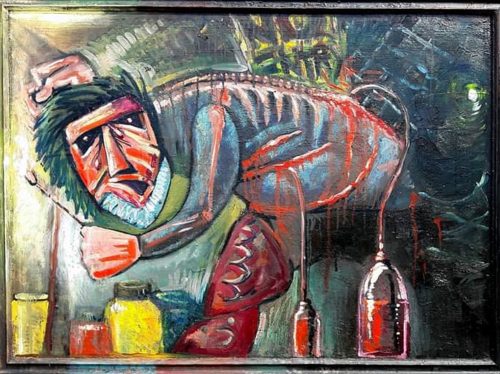 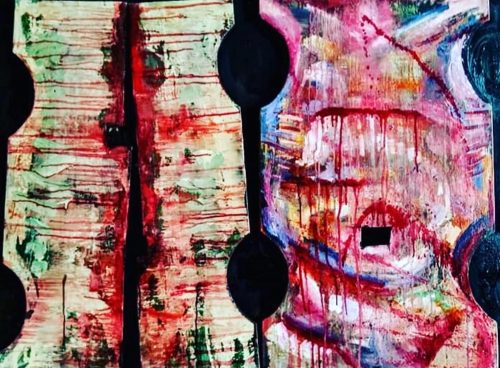 After the residency, I spent a few months trying to describe my pain through non-figurative ways, using abstraction and expressive mark making to describe my discomfort. This resulted in a large solo exhibition at Himley Hall in the West Midlands. 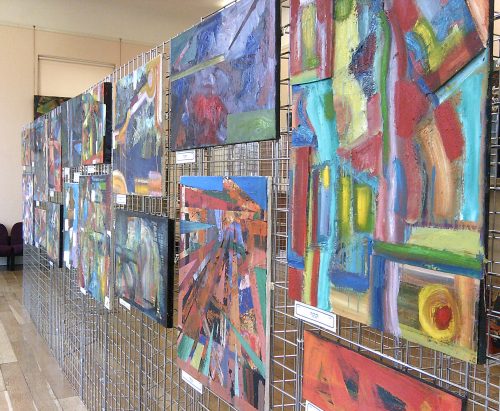 This year, has seen my work progress onto a series of works entitled “Stikman Cometh”. This is a bolt on, to “Hidden Monster”. Whereas the monster was about injury, surgery, shock etc, Stikman is about having to accept what has happened, the wreckage you’re now having to piece back together, knowing it’ll never be complete, knowing life has changed for good. Again, it doesn’t hold back, but it deals not only with the physical, but the mental aspect of being locked away. Most folks are now having to deal with isolation, temporarily. Those of us locked away due to disability, are isolated permanently, unless we’re lucky enough to have friends who’ll visit, I don’t. We’ll still be locked away, when the all clear goes out.

I’m currently hard at work, pushing the subject matter in all directions. Here is the evolution of a work in the series entitled ’40/40? 50/50?’ The first stage is mapped out, the ideas often formulate themselves out of the canvas, without prior sketches. I roughly draw the figures, then the figures are blocked in. 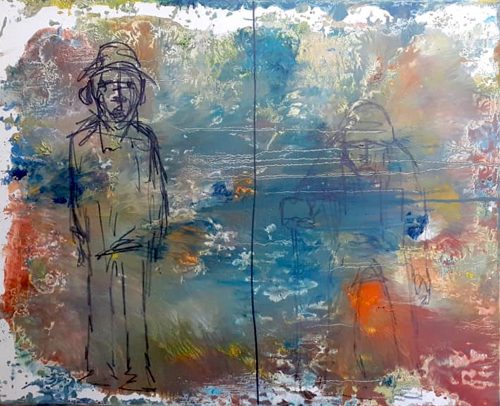 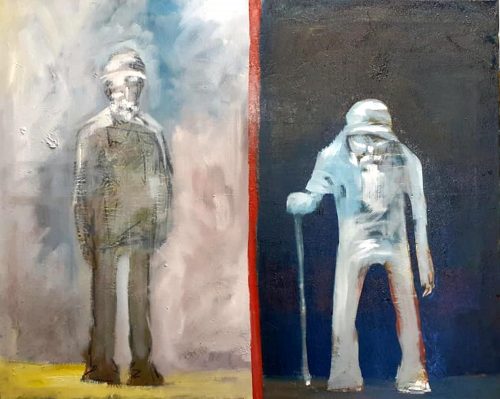 Carefully building up the surface I add the final elements, figures and borders are then redefined to crisp it up. This was all done in oil paint for this particular work. So it has evolved over the last few weeks. 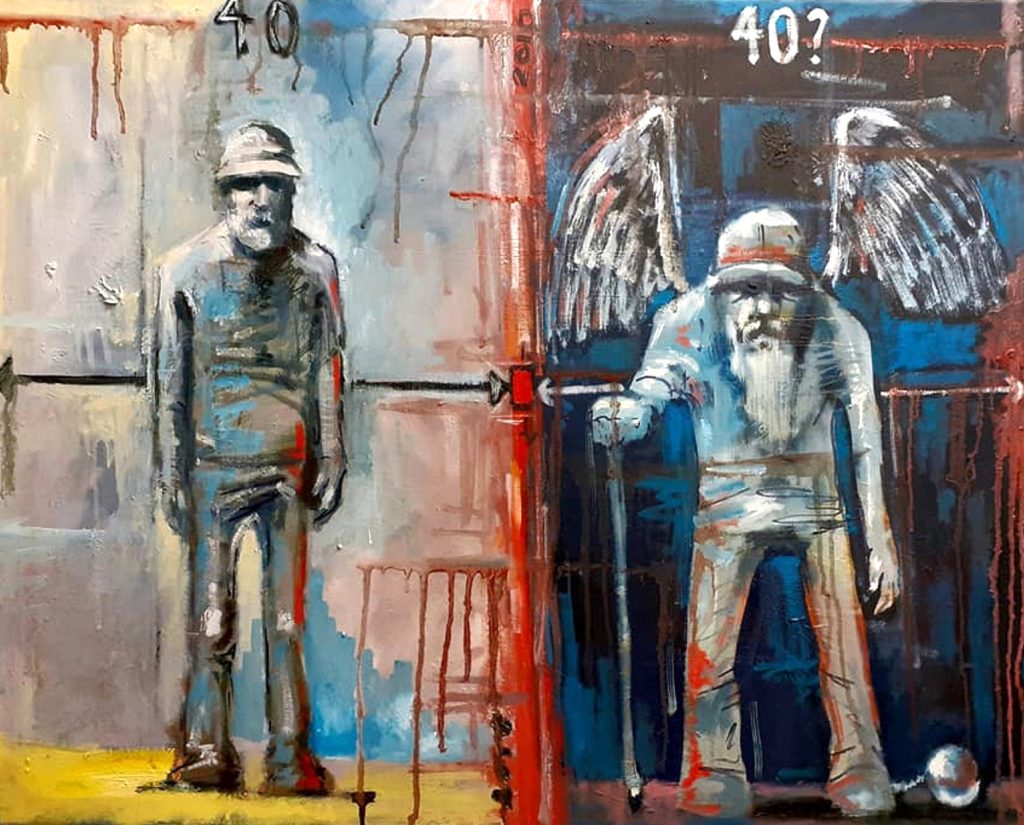 The title refers to the two halves of my life. The first being an active, fairly fit human being, getting out and about, visiting places. The second half being post injury, in darkness, locked away, imprisoned through no fault of my own, barely existing on limited funds. The wings do not mean anything angelic, they refer to imprisonment, “doing bird”, being a broken bird locked away in a cage, hence the ball and chain. Forty was the age life was irreparably damaged for me. 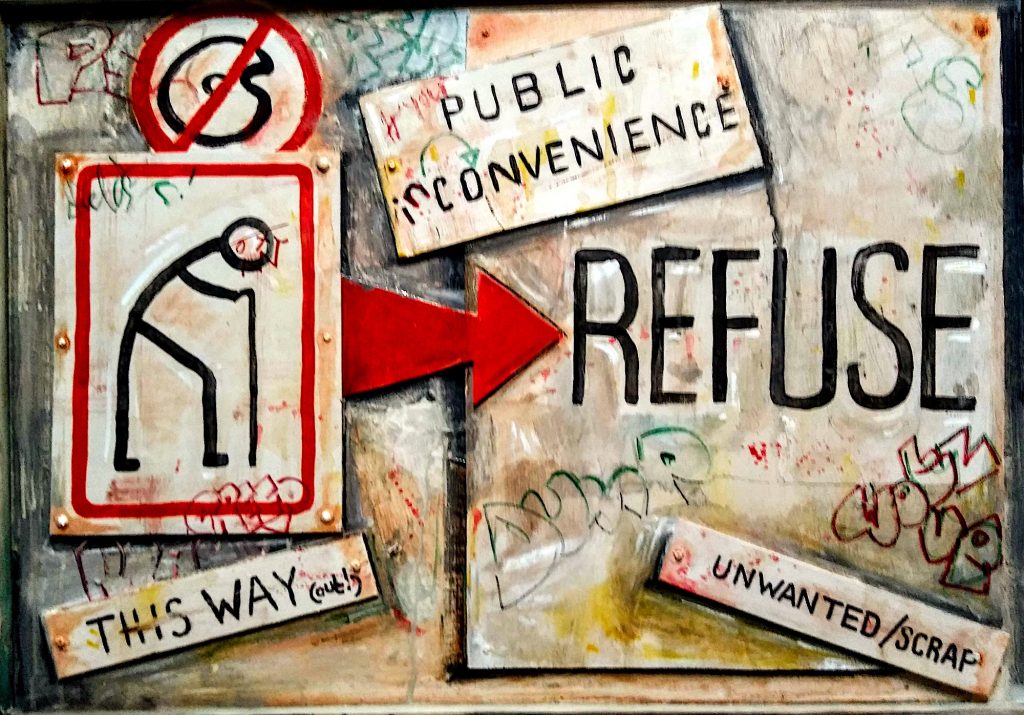 ‘Apologies for the inconvenience’ is a work that was selected for Outside-In’s signs intervention exhibition at Compton Verney Art Gallery in Warwickshire(which has been put on hold due to the lockdown). This was the first of the “Stikman Cometh” works, and is a painted relief on wood board. It makes reference to how I feel when I have made the odd trip outdoors, as I move very slowly on a stick. Its also about dealing with constantly being refused, for submissions of work, bursaries, exhibitions etc, so making you feel like refuse, scrap, not worthy, cast aside. 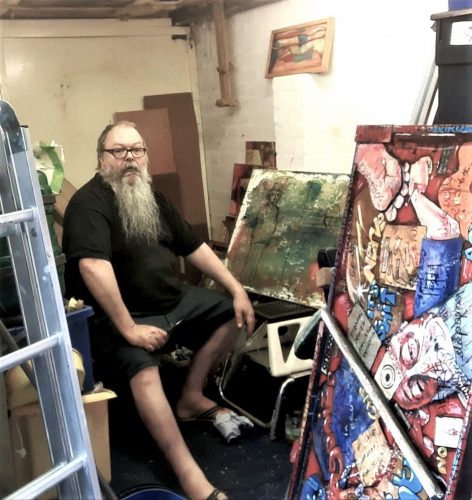 Unable to afford a studio, I work in this corner of my garage. Due to very limited finances, I cannot afford to rent a purpose built studio. I was ill health retired from my job in the Civil Service in 2015, so I have a small ill health pension, and Personal Independence Payments to cover all my bills, mortgage etc. This leaves practically nothing for materials, studio rent etc. So, I scavenge for old half empty pots of paint, and make use of stuff being thrown out. My family help me buy oil paint, canvas and wood now and then. Occasionally, I’ll get a commission, which helps pay for materials as well.

I have also taken to using anything I can find for new work. If it can make a stain, or a mark, I use it. A bunch of the new works have been made with marker pens, coloured pencils, watercolour, ink and pastels, as well as things found at the back of drawers! I use elements of text, in a sort of street art way for these. 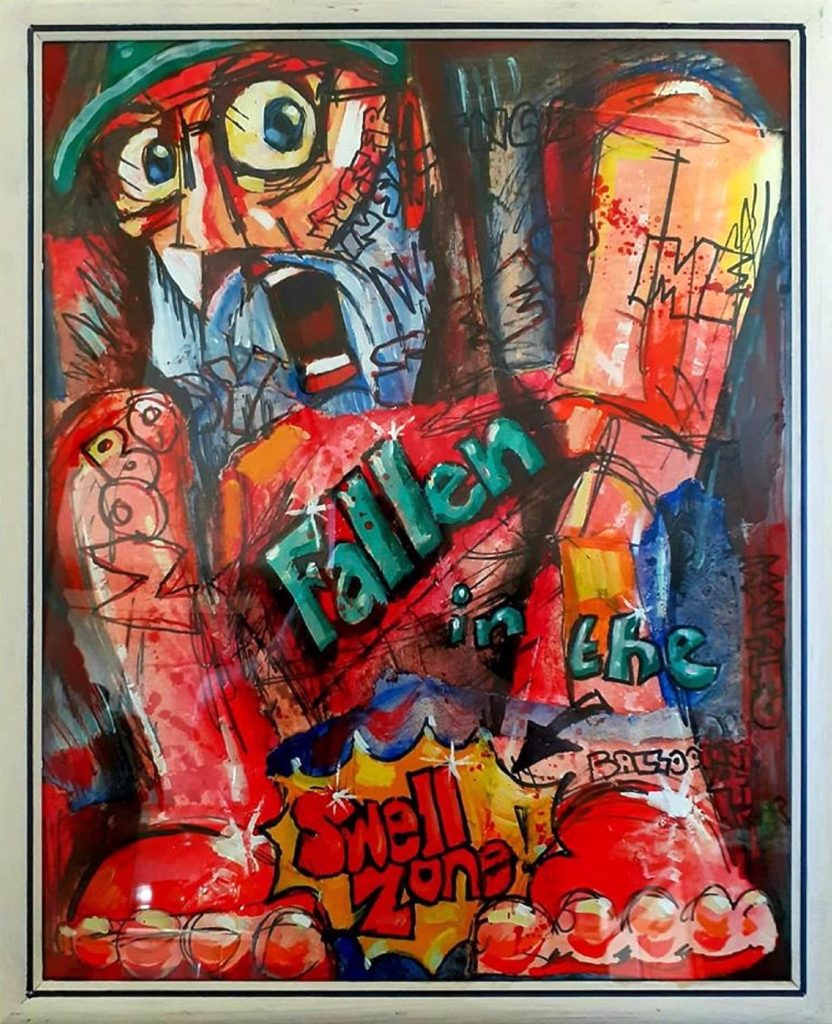 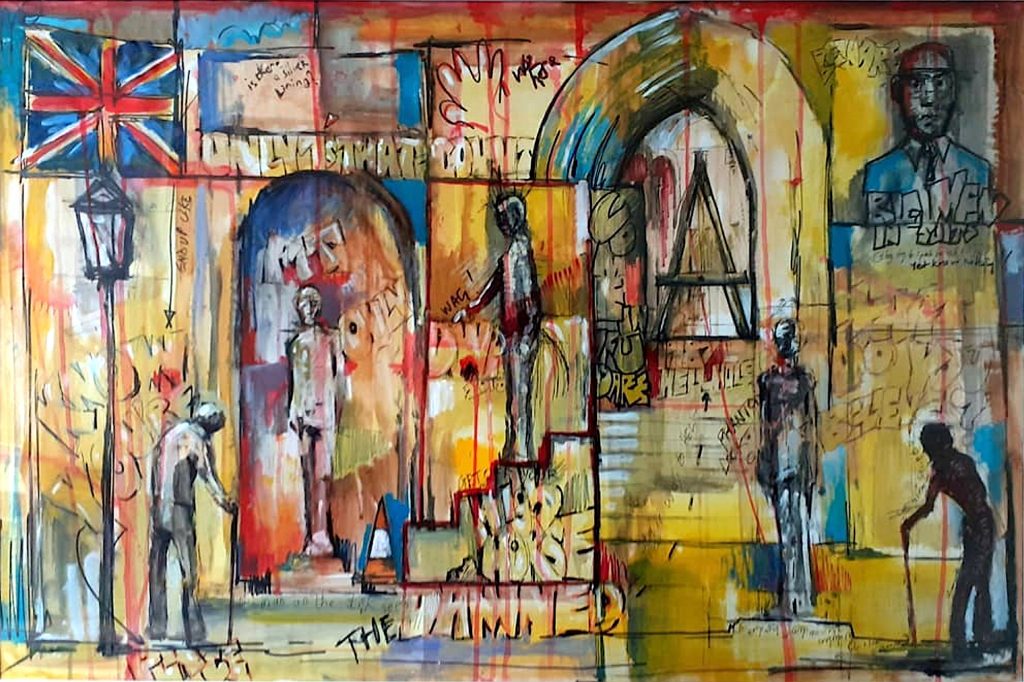 I use all sorts of inspiration for ‘Stikman’. I am very interested in pre-historic art, artefacts and imagery. Also art from other cultures, especially mesoamerican and art by indigenous peoples of the Americas. These influences filter occasionally into these works, as can be seen in a work I’m currently creating entitled ‘Spirit, crash, rattle, dance’. Someone has said they can see elements of Apache spirit dancers in this! It is of two masked figures dancing round the burning brushes of creativity. The wings denote that they’re “doing bird”, the red legs are swelling up. One figure is me with my stick, the other is me falling backwards. The antlers on the heads, refer to my spiritual side. The figure on the left has a red tail, referring to the cauda equina (horses tail, the nerves at the L4/L5 section of the spine) which I had damaged. There are other elements in it, and this is very much a work in progress. 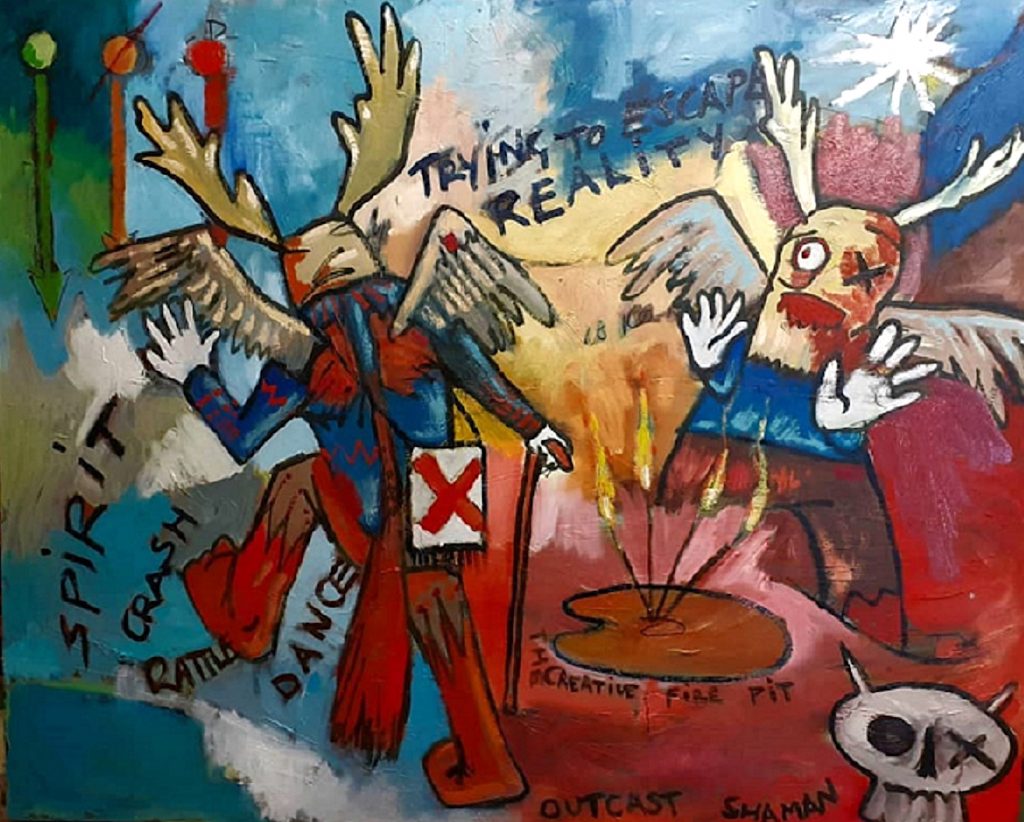 Here are some more works in the series, and I am currently moving onto small sculptural work as well in the next few weeks. 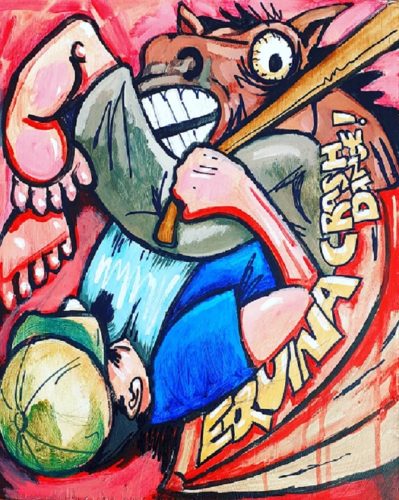 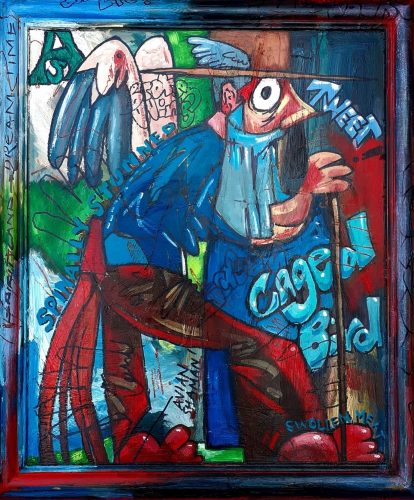 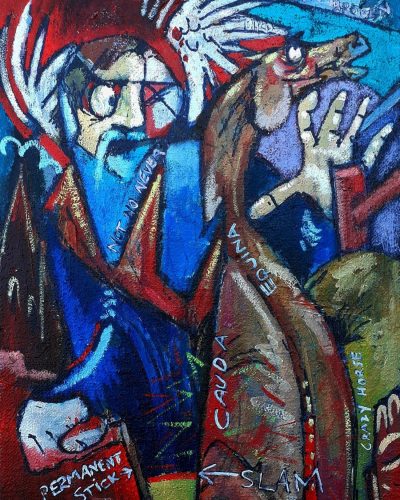 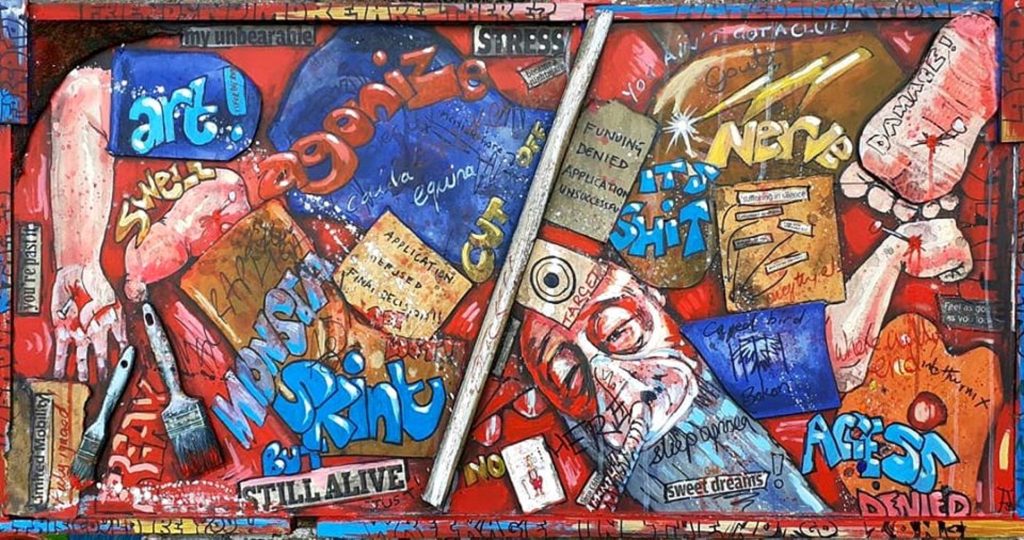 I hope, one day to exhibit both ‘Hidden monster’ and ‘Stikman cometh’ together in one big show. If it inspires others to turn a hopeless situation into something creative and go on artistic journey then it’ll have achieved something special. 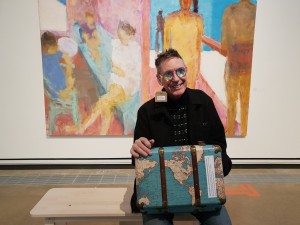 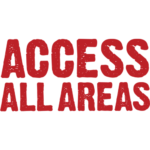 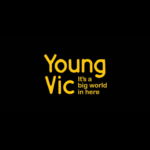 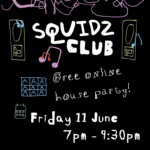 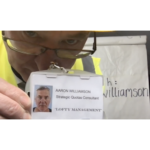