Disability Arts Online put a call-out last year for applications from disabled cartoonists to be mentored by Dave Lupton, aka Crippen. The mentorship Dave was offering was specifically to support the development of a cartoonist who wanted to provide cartoons relevant to the Disability Movement. Crippen’s cartoons are known and appreciated in disability circles the world over and this unique mentoring opportunity to learn from the cartoonists experience has been extended to Stephen Lee Hodgkins since January 2020. 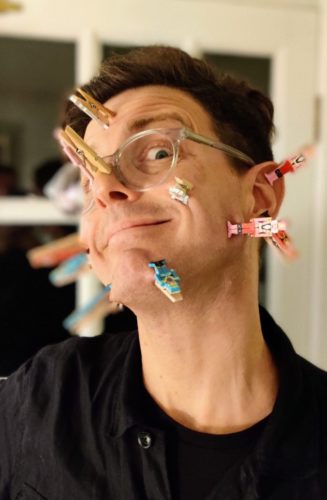 Here we showcase a selection of Stephen’s cartoons alongside an interview with the artist about his visual arts practice. His cartoons have been published previously in the Disability News Service, along with some regional magazines produced by Disabled People Organisations. He recently produced a cartoon-style human rights timeline for York when it declared itself the UK’s first Human Rights City. This was done at the launch event and since has been reproduced on a sign in a ‘peace’ garden.

Stephen describes himself as a massive fidget, which led to his developing a cartoon-style of drawing. He says: “At school my doodling was quashed somewhat, but later when studying as an adult I developed my drawing into an accessible and elaborate way of note taking, like ‘Beano mind maps’.” Later, he came across people doing graphic recording, as a way of visually capturing meetings, and gave it a go himself, which led to ‘group doodling’ activities on large sheets as a way of getting people to engage on issues. He led a ‘York Disability Doodle’ at the local library to coincide with Disability History Month and International Day of Disabled People on the theme of disability equality.

Talking about the act of cartooning itself, he says: “I really like the freedom and the potential for ridiculousness in cartooning. It’s a great way to get things that are screaming out in your head, using vibrant colours and belly laughs, sometimes. There are no rules, except the key rule of cartooning, which is to smash up all the rules. Cartooning is a great way to get to the point, and to reveal darker other things about a situation.”

On the mentoring process itself, connecting with Dave Lupton by Skype and email, he says: “Crippen is superb, and captures well the struggle for disability rights with neons and quippy references to ‘players’ associated with the movement. I came across a ‘Crippen’ cartoon from the 90’s recently, created for British Council of Disabled People, describing barriers of the social model in a poignant way. Superb! His mentoring has provided me with support in working out the message, translating this visually, editing and editing again and keeping focus. Dave’s feedback has all been positive and very useful.”

Stephen gave us a series of quotes for each of the cartoons he’s developed recently, plus a few of his older pieces, presenting his talents as an artist and filmmaker.

Human Lights
I am really concerned about the rise of hard line uncompromising and insensitive view points that favour the isolated individual rather than diverse communities. These have been coming a while, and recent austerity has decimated many resources that were helping build inclusive spaces. I despair that austerity was sold as a necessity, where really it was a trick by government to pitch ourselves against each other. I find myself gasping at the current state of affairs and the nastiness about people that seems to be going around. We need a total change, full participation of people by people.

The ‘Human LIGHTS Act’ is about the fact we are being conned, not behind closed doors (well that as well) but with the lights fully on. Forthcoming changes to the Human Rights Act will surely lessen protections for disabled people. Unfortunately, dominant views favour the typical and will jump at the chance to changes that forward inclusion. I worry about the rise of hard-line insensitive thought and politics and the impact of this on diversity. 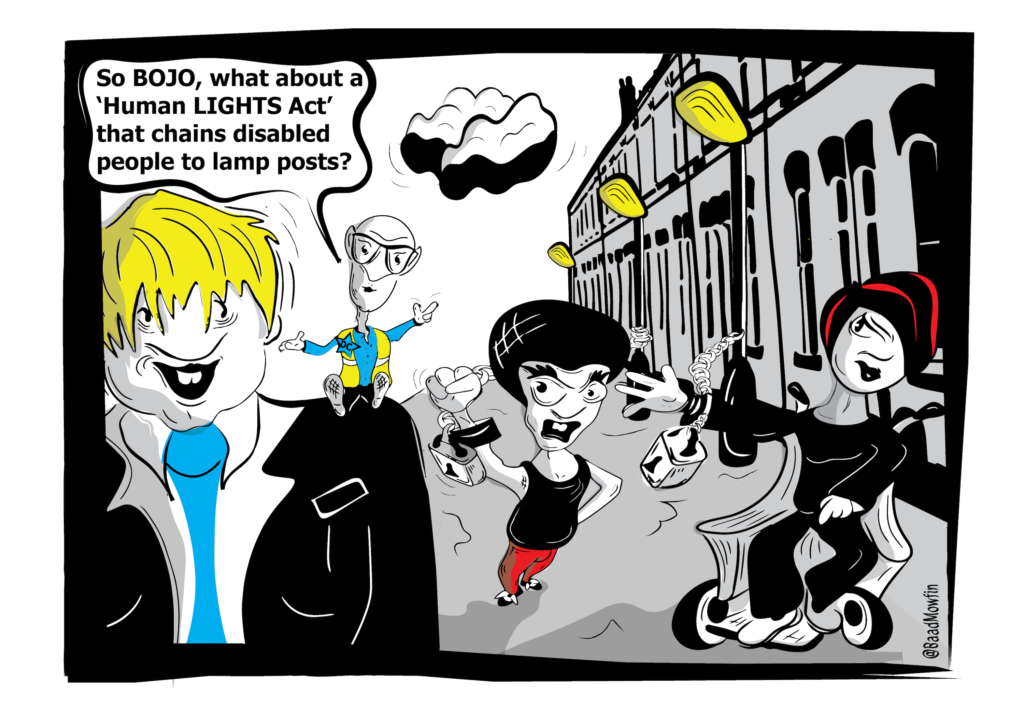 Fish and Crips
Changes to the immigration system through Brexit will have a big impact on EU workers, and this will be hard hitting for individual employers who have found reliable PAs from Europe. I think it is a bit of an outrage that the Independent Living / Social Care workforce is considered low skilled when it is not, other than that for the pay rates associated with it. This reflects societal values that favour employees over citizens. 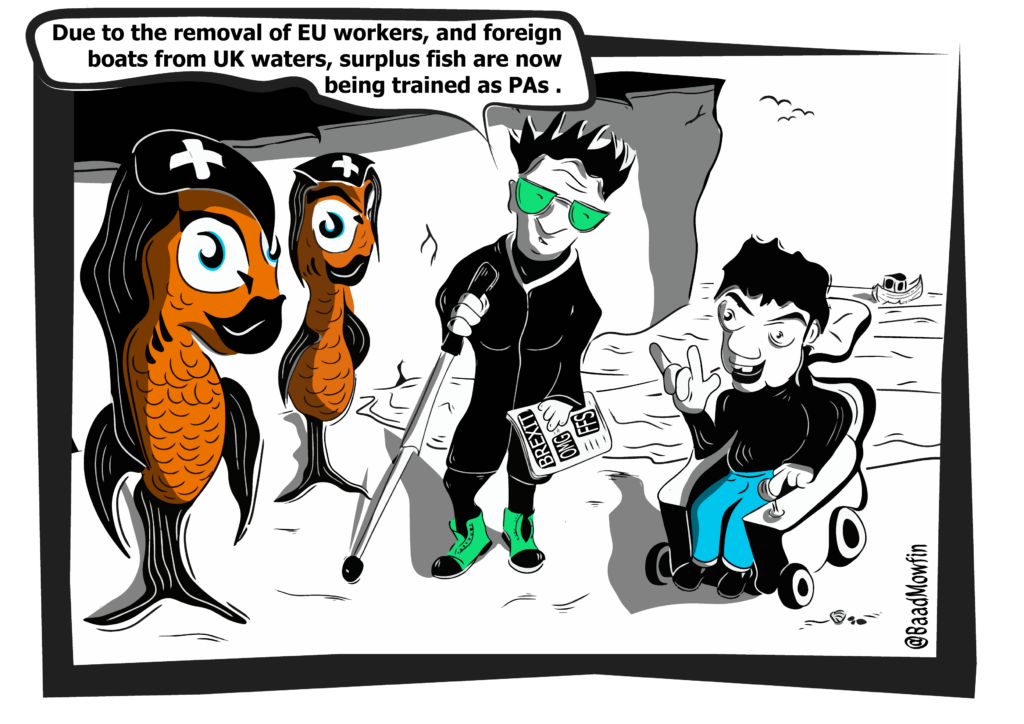 Smartarse Speaker
The abuse and violence committed by policy and practice at the DWP is horrific and unforgiveable. The way the Work Capability assessments has wasted significant resources and made many people much worse off needs to be heavily scrutinised and those responsible be held to account, rather than being given knighthoods. 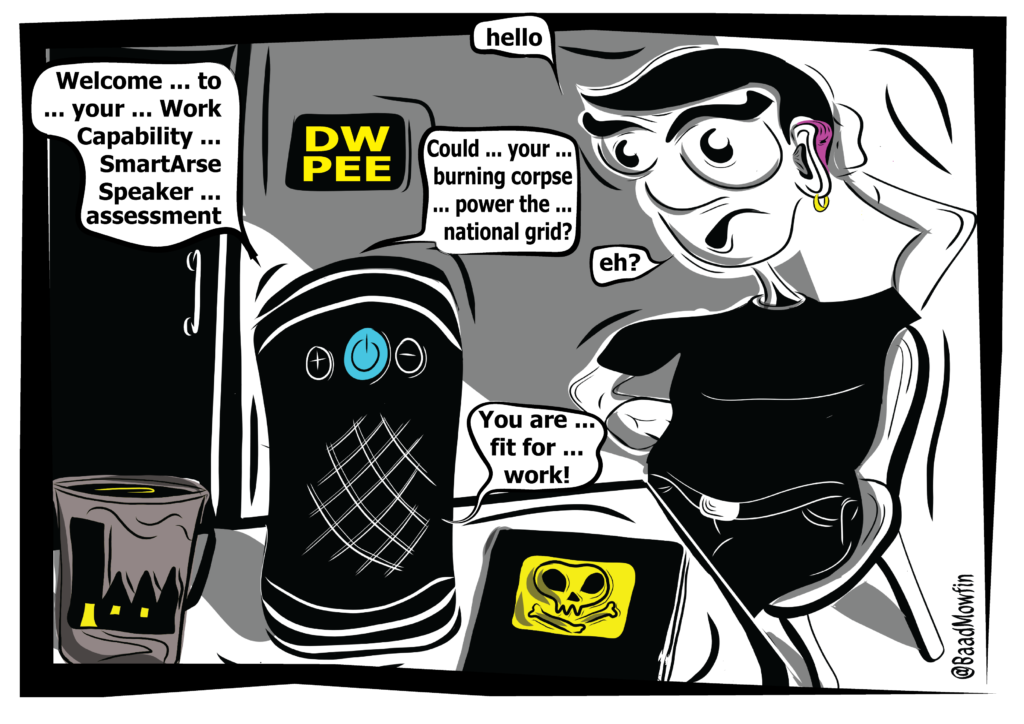 Care on wheels
Made in 2015 this cartoon reflects on the closure of the Independent Living Fund and the reallocation of resources to Local Authorities, and their dwindling capacity and unrealistic optimism for new social care. 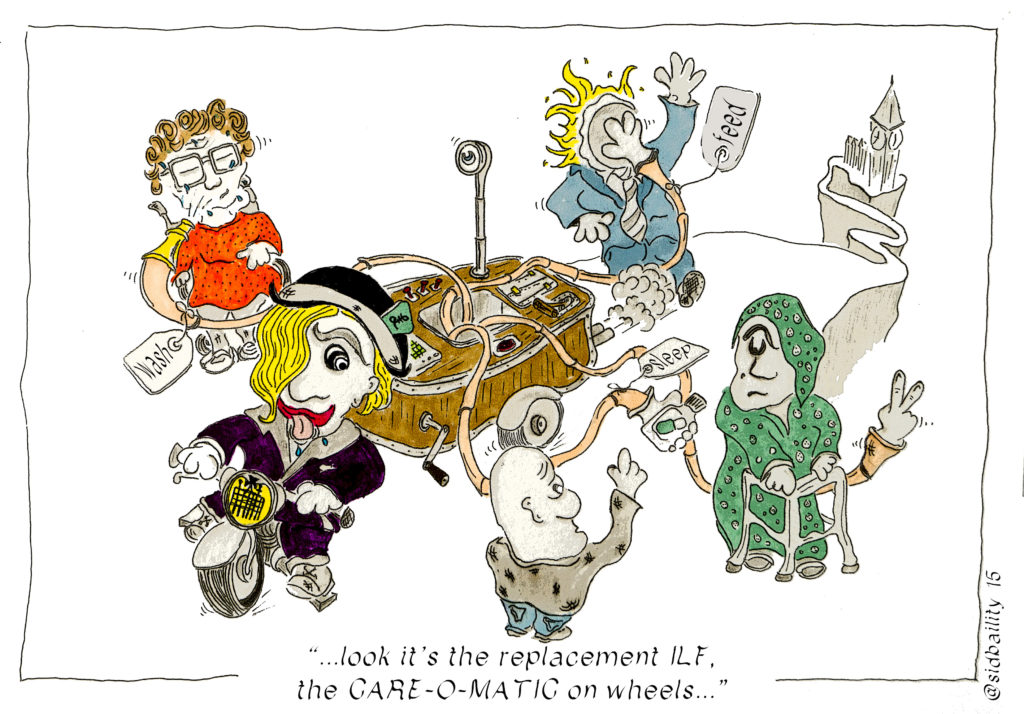 ILF door closure
Again, made in 2015 this cartoon reflects on the closure of the Independent Living Fund and the reallocation of resources to Local Authorities, and the difficulties experienced by those trying to secure independent living budgets and resources. 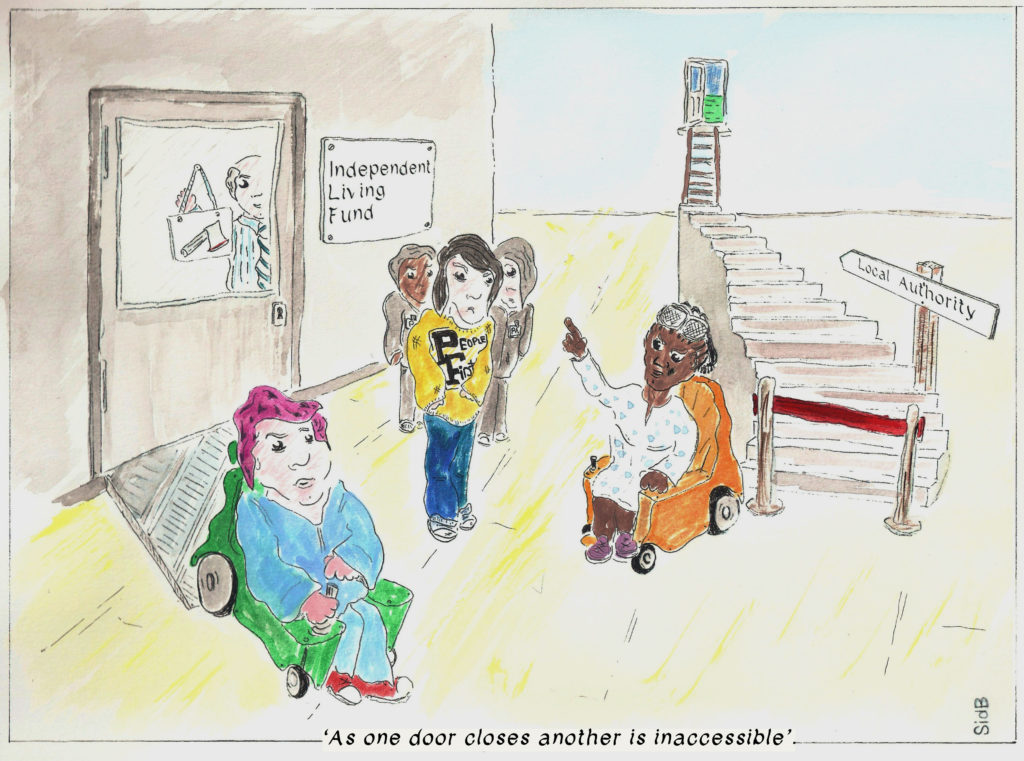 Elf and Social Care Act
Made in December 2014, this piece reflects on the issue of policy solutions for Health and Social Care are troublesome for political parties. Part of this relates to a failure to involve people in meaningful ways, and part is about resources. 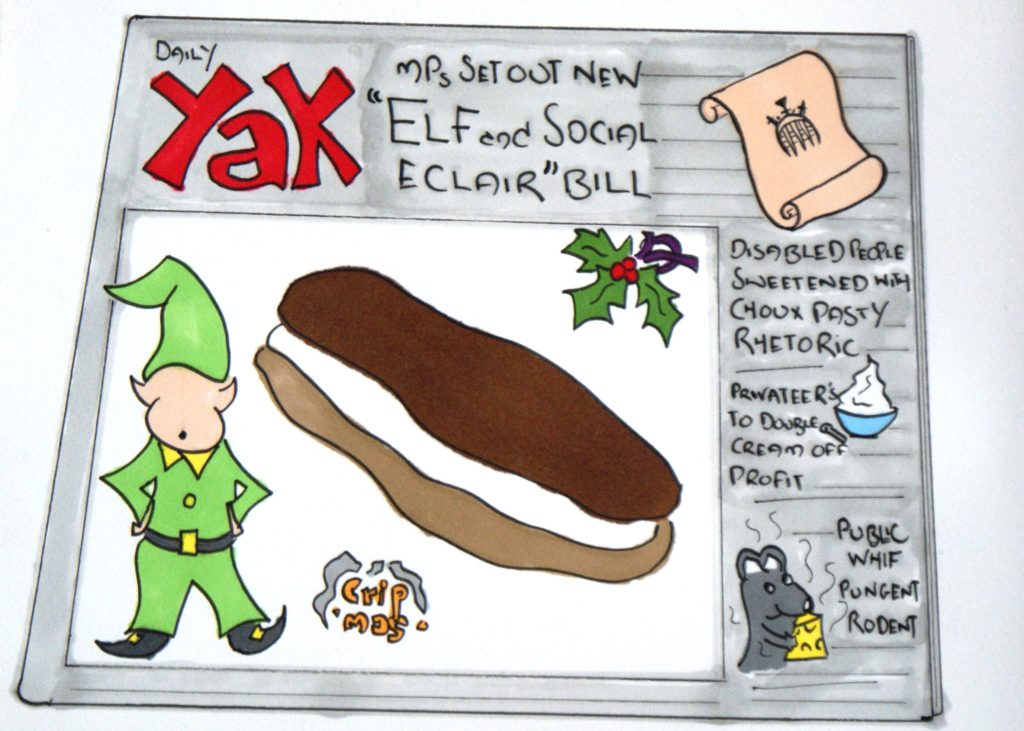 A War Against Disabled People
Audio visual summary of Chris Edwards 2012 report: ‘The Austerity War and the impoverishment of disabled people’. Words by Chris Edwards, Visuals by Stephen Lee Hodgkins. This was shown at the Shape Open exhibition in 2012/13.

Bodeelanwigch
Animation exploring the representation of dyslexia challenging language and literacy norms. Presented as an audio visual poem, the original text written by the disability activist and artist Simon Brisenden (published in ‘Poems for Perfect People’ in 1987) this piece reconsiders the themes in relation to notions of dyslexia and associated learning difficulties. This was shown at the Shape Open ‘[In]visible’ exhibition in 2014/2015.

Powerful stuff from the new kid on the block. I know Crippen’s retired once or twice but has usually come back as there’s no-one filling the hole he leaves. Stephen’s cartoons certainly do that and more. Get your slippers out again Mr Crippen, the future of disability cartooning is going to be in safe hands!

Wondered where all my pegs disappeared to (see photo of Stephen) … Great stuff young man. Feel really privileged to be mentoring with you. Unfortunately, despite the recent threats to retire, my work with you seems to have woken up the old grey cells and I seem to be blogging for DAO more than ever! Perhaps we could go on the road as a double act. Imagine the sleepless nights that would give Editor Colin!

so fantastic to see Stephen here. I know his graphic skills from a while ago. Good to see an historic perspective here and to see a future beckoning

Brill. Too close for comfort !