Dave Russell has been involved the Survivors Poetry scene since the early 1990s. His album Bricolage, recorded in 1992 deserves a special place in the history of Survivor Arts Movement. We give a brief artists profile and a scintillating selection of his musical oeuvre. 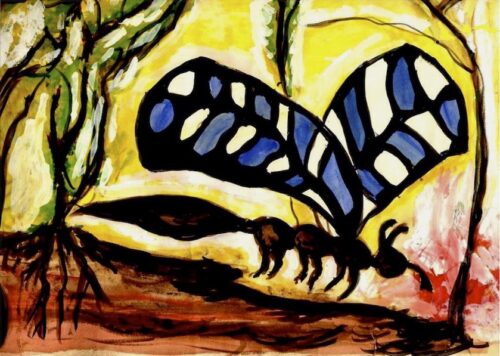 Dave was one of many catalysed by the ‘Skiffle’ boom in the 1950s, which kicked the door open and encouraged anyone to ‘have a go’. Like many at that time, he was motivated to find the source material used by Lonnie Donegan and the like, and was drawn to Leadbelly, Big Bill Broonzy and others, as well as Appalachian Hillbilly Music. On his musical influences he adds:

“There was much relevant coverage on the radio, including Alan Lomax’s ‘Memories of a Ballad Hunter’. and Ewan McColl’s radio ballads. There was also the first extensive broadcasting of classical guitarists and jazz guitarists included in general jazz broadcasts. I discovered the likes of Django Reinhart, Charlie Christian, Jim Hall, West Montgomery, Barney Kessel etc. There was a ‘Guitar Club’ programme which featured the best British jazz guitarists, such as Ivor Mairants, Ike Isaacs and Dix Disley. A little later I heard a lot of Indian music, and then flamenco – especially Manitas de Plata. So I tried to integrate all those elements in my approach to songwriting.”

The general atmosphere of discussion and protest within the Survivor Movement helped to catalyse the political nature of a lot of his poetry and music. In at the beginning of Survivors Poetry’s proud 30 year history Dave Russell continues to be involved and engaged with the organisation as editor of the Poetry Express Newsletter and contributor to poetry events, which during this year of isolation have largely happened online.

“I just feel Survivors’ Poetry is something of permanent and inalienable value. I think a rallying point has been established, embracing many more people, globally, and bringing disparate elements together. It was, and is, incredibly supportive of me. It was through a Survivors session that I met Billy Childish and got recorded. Subsequently, the Newsletter encouraged me to resurrect my artwork. I am proud to continue editing the Newsletter. There have been so many individual performers involved with the movement who have stood out for me that it would be impossible to make a full list. For now I’d name a few like Frank Bangay, Tara Fleur, Michelle Baharier, The Planwalkers . . . I could go on indefinitely.”

Dave’s music reflects an interest in science fiction and a fascination for gadgetry and there can be a Dan Dare versus The Mekons element to his guitar playing with the use of abstract and dissonant chords. Tracks like ’Hades W10’ are the bedrock of an original musical sense of humour. All of his songs start as poems incorporating much imaginative word play and a real joy in language and the sounds of words. There is also a strongly cynical aspect to his songwriting, often expressing concerns with climate change and the impact of Capitalism in relation to the environment,.

Also, importantly Dave’s music documents concerns from within the Survivor Movement – especially within songs like Clinical Psychiatry – challenging psychiatric abuse and the ongoing fight to change the system for the better.

Clinical Psychiatry was initially a look at people bravely trying to analyse and rationalise their hang-ups – written about 1977 before Counselling became widespread. I was delighted that Survivors Poetry adopted it as an anthem. This was recorded by Billy Childish on his then Hangman Records, and later by Jim Clark on Posterity Recordings.

Cracking the Crime and Justice were songs written for a projected musical by New Zealand playwright Alan Williamson called Paperweight, or How to Create a Housing Shortage. With Cracking the Crime, Alan asked me to do a sort of parody of Michael Flanders and Donald Swann of At the Drop of a Hat fame. Justice attacks the hypocrisy and privilege of the legal system.

I composed North London Line Nuclear Freight Disaster for a demonstration against transportation of nuclear spent fuel by rail. This was connected to a book called Carrying the Can. I have been officially informed that transportation is now safe, but many feel the problem still remains. Private recording by Phil Davies.

Re Hades W10 – the initial words were written by my ex-wife, Bear Tyler (formerly Lis Brooks). She and I participated in a poetry and songwriting workshop in W11 at the end of the 60s. For those who know my more recent performances of this number, the middle section, about the Phantom Bus and Marble Arch Car Compound, is my interpolation. The concluding couplet “Cars drone on empty, through the unresisting, leafless trees/Silence drips, unheard, into the thick grey night” was written by Bear. The locale which inspired Bear’s words is St Mark’s Road, London W10 – a very bleak bit of inner urban landscape.

Astral Planes – this is my rewrite of Leadbelly’s Chisholm Trail – bringing the spirit of western movies into the space age. It was prompted by the first moon landings, and my first encounter with an acid-head who introduced me to the phrase.

Scary City – This was a purely improvised piece, done while doing a ‘stressed out’ set at Bunjies. This was recorded by John Peacock and put on a CD called Dave Russell Live at Bunjies.

The Burglars of Britain was also written for Paperweight. This was back in 1976. The song is partly derived from The Hard Times of Old England by the Steeleye Span, very popular at the times, and partly from Dylan’s Hard Rain. Some reference to The Beggar’s Opera, but then it assumed its own enduring significance. In some sense, we are now living in a ‘Criminal State’, and the Burglars are the government. There is also a humorous sub-text about paroling convicted fraudsters to rescue the economy. Also recorded both by Billy Childish and Jim Clark.

The Empress of the Sea of Empty Faces was written in 1969, when everyone was into fascinating, scary femmes fatales. Recorded by Jim Clark.

Disability Arts Online · Dave Russell: The Empress Of The Sea Of Empty Faces

You can catch more of Dave Russell’s genius via a collection of his artwork from over a period of several decades, consisting of both of abstract and figurative work. Accumulated Visuals is now on Amazon!