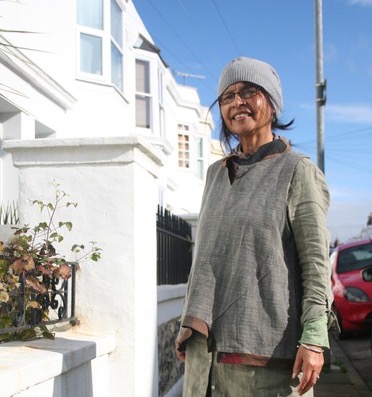 L. Oluwafemi Hughes-Jonas is a poet, writer and storyteller of Nigerian and Indian heritage and raised in Scotland. She has published short stories in various anthologies; Ink on my Lips (Waterloo Press 2013} and Hidden Sussex (Writing Our Legacy, 2019).

From 1996 to mid 2004, Oluwafemi worked with performance group Sound Spectrum. In 2011 she read her work in Covent Garden, London for Exiled Inc. Throughout 2018 she gave 12 readings in the Ealing Benedictine Arts Centre, from her to be completed novella River of Returning – following the life of Lauren Lloyd, growing up in Britain in a fundamentalist, Christian institution from the early 1950s through to the 1970’s. These reading were followed by facilitated dialogue in her role as co-facilitator of the ‘Deep Democracy Forum Group’ (2006 – 2016) connecting diverse communities to reduce division and support new possibilities.

In 2019 she toured East and West Sussex reading at Writing our Legacy Events and for Black History month in Brighton. Her writing weaves the threads of class, ‘race’, gender, diversity and displacement in an unfolding journey of trial and transformation in restoring her ‘self’ – herstory in the wider human story. Oluwafemi was also the founder of Brighton based ‘Community Dialogue for Change’ (2006 – 2016).

DIGNITY: On the Streets of Brighton

Under June ‘s blue canopy amidst a bejewelled mood, I stroll. At New Road’s, thronging food festival, a youthful tribe pose in cropped tops with denim’s torn, ripped holes, as can afford. Huddled around vegan and veggie stalls, savouring from wooden boards, falafels, red cabbage dips and drinks, along this heaving, breathing path In Brighton.

Next door to a Moroccan leather bag store, a guy in Hawaiian shirt, is juggling. A sudden commotion, a tumbling ball bounces off a gal’s juice, ”Whoops” he says ,as she jumps, shrieks, orange splashed over her white front. Friends  burst into laughter, hair flying, apologies fading.

And, somewhere beyond, a musician strums her guitar, wailing out her long-song.

In the wave of bobbing pale hair and hue, I noticed a tangle of wiry dreads of someone, it may be said, is ‘on the edge’.  I catch a faraway look in his wide -spread, ebony eyes, notice his weathered, black skin, his time-worn clothes. His visible, invisibility.

I recognise him as a brother from the African diaspora. Alone and walking this silver-paved path in Brighton.

Something tugging at me just then, conjures up a deserted place I’ve come to know. Is it my solitude? In a crowd, my silent brood, an attitude, I sometimes wear under my hood?  A sense resonating in my furrowed brow. Is he, as I am now, lost in time,  misplaced in this foreign town?

Unseen I guess, accept as someone associated with ‘Less’; ‘Home –‘less’, and Regard – ‘less’. Here, because pale men in white pith helmets, men in khaki shorts  were there, not that long ago.

Here on this street, Imperceptible to most; a dry well of unwelcoming in the white – in-the-eye of this crowd, as he walks this pristine, pedestrian path in Brighton.

A sudden fragrance wafts on a kinder breeze.  My mouth watering, draws me to a stall of scented cakes: of avocado, green tea, pistachio and rose, there’s  one with lemon, orange zest, flaked almonds and whipped cream, I’m told. A mature, freckled-faced woman with wild, red hair, next to me, sips on a juice. Curious, I watch her, with an unspoken  question “Mmm mango, coriander and lime” she sighs, her green eyes smile, at me, “seriously sublime!”

I squirrel away with my prize cake and chai tea in a recycled cup I brought with me, looking for a shady bench, a place to sit and quench my thirst. By-passing two growling dogs, loitering, I  find the perfect spot – a bench by rose bush, beside the Pavilion Gardens. And there he is! Lace holes of his boots empty, sitting in quiet repose, like he knows something I don’t know.

Offering him half my cake of scented rose, I discover he is mute. His mother tongue in eternal quietude among the noisy multitude. Yet, he receives my offer with a ritual gesture: placing his right hand across his left breast, his long fingers there spread, he bowed his head. Fleetingly, I feel a serenity, as if a quiet lake, shimmers blue and gold beneath his skin. I feel akin.

He reminds me of a presence I met on this very road, during a festival of ‘sacred music’.  Sufi dervishes in long, white, flowing robes, connected to that deep source. While, this man’s a long way from home walking the streets of Brighton.

Whenever in town after that, I peel my eyes on the lookout for him. One of many on the street, some bundled in duvets on pavements with caps upturned. I found him, resting on a bench, amidst the hubbub of the city streets, eyes cast down. Is he elsewhere in prayer or despair? My urge is to befriend. He looks up as I go to join him. I’m surprised by the mischief in his marcasite eyes. What is he thinking?

I imagine him saying: “Yes, my friend, I’m in a kind of prayer”, “not just to fill the holes in my belly or in my boots, or because it might be a hook on which I may catch a fish or two. My prayer, or silent stare, is also for the hole I perceive in the fabric of this beautiful, whitewashed town by the sea, where some are left without a raft.”

“Every day, I observe  an emptiness that overflows with tit-tat, filling the bins that spill over with plastic cups and  lids and all edible manner of things, like chicken wings. Yet as  stalking seagulls pounce on the feast at my feet, I see how wings can once again take flight.”

Many passing angels in the curvature of Brighton’s domed architecture.

Randomly, over a year or so we go for coffee, keeping each other company. And, just as he’d appeared among the crowd, he vanished. Two years on, I strode out in the morning, remembering the one whose silence in me invoked gratitude. In a flash, I understood the meaning of his long fingers spread across his breast, in his bowed head, he’d said: “I take you to my heart”.

Like a messenger from beyond, he brought a song to the heart of the city streets of Brighton, resonating with my own need to belong.